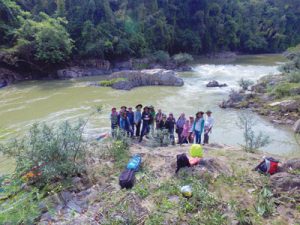 Thanks to a climate with high levels of precipitation and a distinctive mountainous and hilly landscape, Laos has a high hydropower potential, which is also one of the most valuable assets of the Southeast Asian country. For some years now, power plant construction has been driven by companies from China, Thailand and South Korea, the installed capacity is now 6.400 megawatts - in comparison, Austria has 4.500 megawatts for run-of-river power plants plus 8.200 megawatts for storage power plants. A smaller part of the energy covers the country's own needs, the majority is exported to Thailand, Vietnam, China and Cambodia. In the future, the clean electricity will also flow to Myanmar, Malaysia and Singapore. The Laotian government wants to triple electricity production by 2030 - and hopes for the help of private international investors.

Against this background, the Innsbruck engineering office ILF looked at power plant projects in Laos, which are generally suitable for private investors: These are mainly small to medium-sized power plants, which offer attractive returns. Most projects had been pre-developed by local companies. However, the experts found that many of the investigated projects had planning flaws. "That's not enough for international investors," says ILF project developer Andreas Nirnberger, "for which standards and quality criteria must be met, which is not the case with a large number of projects in Laos."

Often not even the nationwide regulations, which according to Nirnberger "are not roughly different from those of other countries", receive sufficient attention. However, the authorities could soon have a more severe eye, as there are now major problems in large power plants: Only in July triggered a dam failure disaster with dozens of deaths, in addition there is controversy with neighboring countries, because the Mekong clearly because of the Laotian power plants on the lower reaches less water leads.

In the Laotian hydropower sector, there was a gap in the area of ​​planning competence, in which the ILF engineers saw a welcome challenge. In an exchange with the Oesterreichische Entwicklungsbank OeEB, it expressed its interest in entering the Laotian energy sector, provided suitable projects were available. The ambitions of both companies thus met. Further considerations led to the agreement to jointly found a project development company - a novelty for both partners - that would set up sustainable projects at an international level "ready to build": Specifically, profitable power plants of 20 to 80 megawatts with a total output of 250 megawatts should be within five years available for financing and implementation. The partners agreed that these should be lighthouse projects in the power plant sector.

For now, it was up to ILF to evaluate and, if necessary, create the possibilities and conditions for this - an effort for which the Austrian Development Agency ADA provided co-financing in the framework of a strategic alliance at the beginning of 2017. ADA program manager Susanne Thiard-Laforet justifies the funding with the prospect of a high level of impact in the renewable energy sector of Laos through sustainable market preparation and broad know-how transfer.

In the next step, ILF, which today works with four engineers in Laos, set out to ascertain the legal and economic framework - approval processes, tariffs and network access - as well as possible stakeholder interests in order to create market studies and opportunity-risk analyzes based on this . At the same time, it was looking for partners among Laotian project developers to jointly identify and develop potential hydropower plants. With Archineer Associates, a large architectural and engineering firm in the capital Vientiane, already known from previous cooperation, had already agreed in advance to be available as a long-term partner in the power plant sector. In individual cases, however, doubts about the European approach had to be dispelled, as Nirnberger reports: “One of the local project developers said that our model was far too cumbersome and expensive and put a concept from China on the table for comparison. But after two hours of in-depth discussion, he stated that on closer inspection, not only was our proposal sustainable and the implementation concept technically high-quality, but also the hydropower project as a whole more economical. "

In the meantime, two Archineers engineers have received training at ILF in Innsbruck and are being further trained on site. In addition, technical graduates of the National University of Laos are recruited by Archineers and trained by ILF in the context of specific projects in relevant disciplines such as hydraulic engineering, geology and hydrology, but also in environmental and social standards.

Since the preparatory work was completed positively, the joint project development company between OeEB and ILF became reality at the end of 2017 and was registered under the name Rendcor. Meanwhile, there is already an own office in Vientiane, from where the project development is controlled locally. In the technical processing now more and more tasks are to be taken over by the Archineers. As a result, solid planning expertise in the hydropower sector will soon be found in Laos instead of Gap.

The ILF Consulting Engineers, who started 1967 as an engineering office in Innsbruck, is an engineering and consulting firm operating across 40's five continents, planning and developing projects in the areas of energy and climate, water and environment, transportation and construction, and oil, gas and industry. ILF employs more than 2.000 employees.

More information about the ADA Economic Partnerships can be found here here!

WiPa: pasture instead of coal