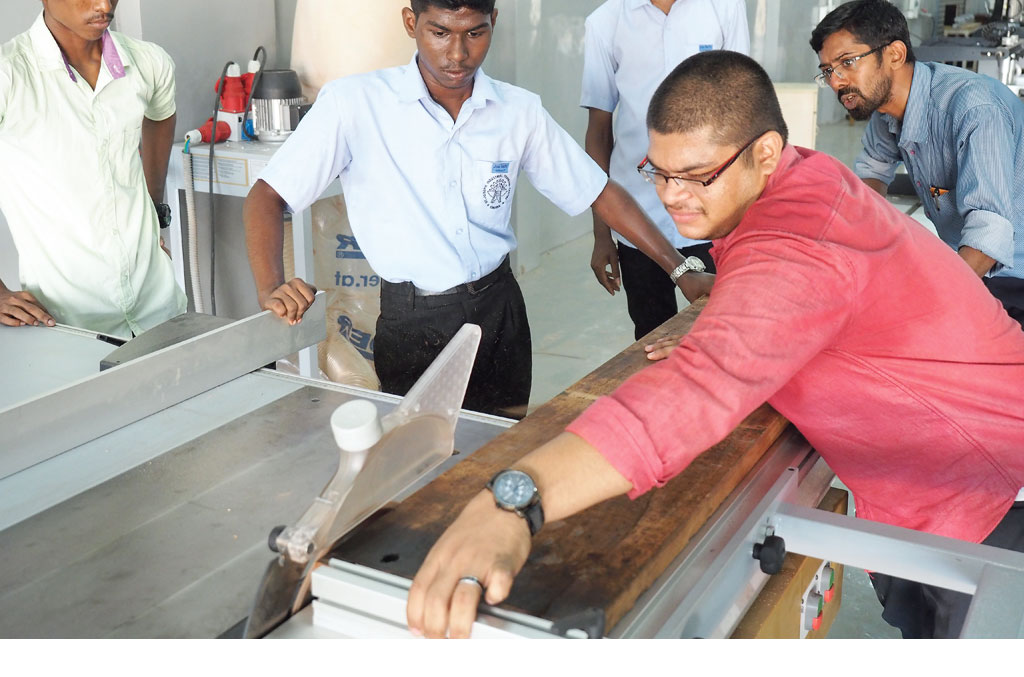 Hansjörg Felder was able to grasp the rise of millions of Indians into the middle class in recent years almost with his hands. The change triggered a huge demand for living space, furniture and thus for woodworking machines of all kinds - and the Tyrolean family business Felder on the subcontinent has been selling the latter for more than twenty years. "For us, India is a rapidly growing market that is increasingly relying on higher technology", stated company boss Felder to the organizer at Wood India 2018. The event in Bangalore is next to Delhiwood the most important sales fair for the Indian wood sector and reflects the boom. The World Bank expects an annual growth of twenty percent for the time being.

2002 settled in Mumbai to expand the customer base with showrooms as well as its own sales and service employees and to satisfy them in the long term. Because of the high demands of the machines due to the variety of cutting material - from solid wood to press plates containing manifold fillers - the service employees are even in the majority. This also applies to Delhi and Bangalore, where Felder opened more branches.

At the Delhiwood 2015, Felder celebrated the sale of the 3.000th machine. The customer was a regular customer who emphasized that the name and quality of his company had become as strong as the machines on which he worked. Since then, Felder has sold hundreds of other machines on the subcontinent. The workforce has grown to ninety employees.

The opening of a branch in Chennai 2018 marked a new milestone: from the port city to serve the East Indies, Sri Lanka and the Maldives. Nevertheless, the location decision owes primarily to the opportunity to set up a training center for wood technicians here.

The idea for this came up on the occasion of a visit by Father Ashok to the Felder showroom in Bangalore. Father Ashok heads the Don Bosco Technical Campus DBTC in Chennai, which, in addition to technical vocational training, offers specialized vocational training in cooperation with well-known companies such as Tech-Mahindra, Yamaha, Zwick Roell, Godrej and Toyota. The specialty of the training center: It is aimed at poor young people from mainly low castes.

Apart from social considerations, the offer to train wood technicians for the local market with a recognized partner on their own machines was attractive for Felder. Regional Sales Manager Marco Antoniazzi explains: "For us, the opportunity has opened up for us to be able to communicate well-qualified experts in the sale of ever-better machines." Together with the Austrian development NGO Youth One World - Don Bosco, he prepared the project for support within the framework of a project Economic partnership of the Austrian Development Agency ADA. "The cooperation is exemplary and beneficial for all parties involved," says Hannes Velik, Head of International Projects at Jugend Ein Welt. ADA program manager Susanne Thiard-Laforet calls "the linking of business interests with opportunities for advancement for young people" as a central motive for support.

Preparations started in early 2017. The workshop on the DBTC site was completely renewed and, last but not least, a level floor was installed. Because, as Antoniazzi explains, “machines that range from small planing machines to CNC woodworking machines have to stand upright so that you can work properly on them.” Since opening in September 2018, the workshop has also served as a showroom. Felder opened an office next door with an experienced manager, two sales representatives and a technician. Part of their job will be to introduce the course participants to their work areas - and hopefully to discover young talent for fields themselves.

The first regular less than two-year course for 30 participants is scheduled to start in July - Antoniazzi expects 20 graduates from 2021 to meet the standard drop-out rate in India. The practical program includes a basic technical training, an officially recognized carpenter training and an add-on training as a machine operator. In addition there are soft skills - handling, language, appearance etc. -, which DBTC offers at all courses. Felder has already trained and certified two trainers and created training material. The first introductory courses were also offered, in which interested youngsters prepared tables and armchairs for the DBTC's own use. "The project is developing so prominently," says Antoniazzi, "that we're already thinking about where we can do the same."

The Felder Group is one of the world's leading mechanical engineering companies in wood and composite material processing. Since it was founded in 1956, the family business has developed more than 4 machine types, most of them new, under the brands Hammer, Felder and Format 180, brought them onto the market and established itself as a full-service provider for craft, trade and industry. Planning and production take place at the headquarters in Hall in Tirol, where a total of 650 employees are employed. In addition, the company managed by Hansjörg Felder has more than 250 sales and service points in 84 countries.

Hygiene on the farm