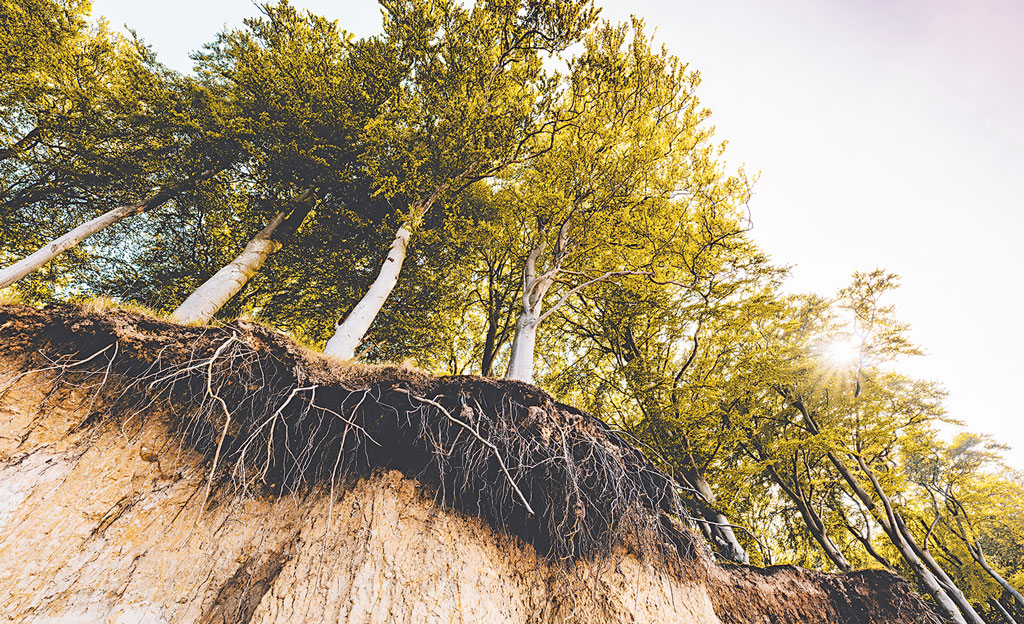 Their enormous importance in the fight against climate change is often underestimated: trees take carbon dioxide from the atmosphere and convert it into their own biomass with the help of light and water, releasing oxygen. Forests are greenhouse alleys and assets in the achievement of the climate targets adopted in Paris in 2015 - if they are managed accordingly. Excessive logging, clearing and fires diminish the contribution of the forest ecosystem to emission reduction or even reverse it.

To what extent can the protection and restoration of natural landscapes such as forests, meadows, wetlands and soils support the fight against climate change? A research team headed by Bronson Griscom, forest expert at the non-profit organization Conservation International, addressed this question. Its aim is to provide states with data and facts for the development of their climate strategy and to identify opportunities for action and investment that contribute to the protection of ecosystems. That was in 2017 Result at the table: Natural climate solutions, as the researchers call the measures, can cost-effectively achieve at least a third of the greenhouse gas reduction that is required to keep the average global temperature increase below two degrees Celsius by 2030. This means that they can be “more economical than some technical solutions” - and with additional benefits. "Natural climate solutions offer states a powerful set of options," says Griscom, "they not only help to comply with the Paris Agreement, but also to increase soil productivity, purify air and water and preserve biodiversity."

According to the experts, the protection, reforestation and sustainable management of forests, especially tropical forests, have by far the greatest impact among natural climate solutions. Nevertheless, only a disproportionately small proportion of public climate protection funds have been directed in this direction. Griscom sees reasons for the reluctance in particular in the uncertainty of the donors with regard to the cost-benefit ratio of natural climate solutions and in concerns about the long-term conservation of the forests.

For Griscom, financial resources are therefore only part of the solution. He believes it is at least as important to make the sustainable existence of forests attractive to those who previously viewed them primarily as a cheap source of raw materials or an unpleasant limit for their cultivated or pastured land. The forest expert is convinced that such a change of perspective can only be achieved with private participation and new business models.

In 1996, the Central American country of Costa Rica started a much-noticed attempt to regain forest land, whose forest cover had shrunk dramatically from 1950 to 72 percent of the country's surface in 26. Still under the impression of the environmental summit in Rio, the government enacted a new forestry law that prohibited further deforestation and at the same time anchored that forests not only produce wood, but also provide services that are generally not very popular: they protect water catchment areas, ensure scenic beauty, and bind carbon and preserve biodiversity. This benefits individuals, communities, businesses, the national and global community - and should be paid for by them. The law allowed the nationwide rollout of payments for ecosystem services (Payment for Environmental Services PES).

Since 1997, through the PES program, sixteen thousand medium-sized and small land and forest owners in Costa Rica have received financing for tree planting, for the reclamation of the natural forest cover or for ecosystem services, without the commercialization of the forest being prohibited. With payments of $ 30 million annually, more than 1,2 million hectares of Costa Rican soil came under the PES regime. Since then, Costa Rica has repeatedly improved the system. Overall, Griscom considers the efforts to be exemplary: “Costa Rica has tripled its forested area within 25 years, while at the same time doubling its economic output. In 2021, Costa Rica wants to become the first carbon-neutral country and thus bind as much greenhouse gas as it emits. "

At the center of the system is the National Fund for Forest Finance FONAFIFO. The fund draws its funds from mineral oil tax and water fees, from voluntary donations from companies such as hydropower plants, breweries and tourism companies, from grants and loans from development financiers such as the World Bank and from the sale of CO2-Emissions rights. The fund's main focus of work today also includes REDD + projects. REDD + is a market mechanism within the framework of the international climate framework convention UNFCCC, which enables developing countries to achieve measurable and verifiable greenhouse gas reductions through forest protection measures that are monetized. Costa Rica was one of the first countries to campaign for the introduction of REDD + and concluded the first agreement in 2013 with the World Bank's Carbon Fund set up for such projects.

Many types of play & lessons learned

Costa Rica's program for payments for ecosystem services was imitated immediately by Mexico, China and the USA, among others. PES programs were initiated even more frequently for localized regions - often water catchment areas. According to the OECD, there were already more than 2010 PES programs in 300 that were implemented by different initiators. Experience shows that “the mechanism is not a universal solution and many accesses are possible within the system”, as Stefano Pagiola, environmental expert at the World Bank, notes.

The integration and participation of all those who benefit directly or indirectly from the corresponding measures remains decisive for the creation and success of PES programs. This is shown, for example, by an attempt to use the instrument to contain erosion in the Mat catchment area in Albania. The originally Dutch NGO active in the Balkans CNVP had prepared a preparatory study in cooperation with a university and a forest association on behalf of the World Bank (see also interview on page 38). However, no commitment could be obtained from the immediate beneficiaries, especially the hydropower station at the Ulza reservoir, and the state also backed off despite initial promises. Now it is a matter of opening up other sources of money.

Interview with Isuf Omuri, forest expert at CNVP in the Balkans

26. March 2020
No European country suffers from soil erosion as much as Albania. CNVP Isuf Omuri's forest expert sees ways to counter the loss of soil and rock.

Since the rediscovery of the ecological and economic benefits of forests, numerous international forest-building initiatives have emerged. The IUCN launched in 2011 by Germany in cooperation with the International Union for the Conservation of Nature and Natural Resources proved to be an effective trigger Bonn challenge. The platform defined the goal for a first stage by 2020 to rebuild 150 million hectares of degraded and deforested land. Commitments from 56 governments, from the USA to Rwanda to Azerbaijan, caused the Bonn Challenge Barometer of Progress to drop sharply: at the beginning of 2020 it already reached 170 million hectares, which is more than four times the area of ​​Germany. The commitments are to be increased to 2030 million hectares by 350. “This generates around 170 billion dollars in net benefits from the protection of water catchment areas, improved crop yields and forest products and binds up to 1,7 gigatons of carbon dioxide equivalent per year,” the organizers said.

Financial aid for the implementation of the projects offers, among others, the Global Environment Facility and the Green Climate Fund. For projects in Europe, the Financing facility for natural capital are addressed, a partnership between the European Commission and the European Investment Bank to promote explicitly commercial nature and climate protection projects. Loans for a hydropower plant to curb erosion in the water catchment area are presented by those responsible as an ideal financing example.

Bring private people on board

However, since hydropower plant operators are not so easy to get a taste of, the conservation organizations Conservation International and The Nature Conservancy in Latin America are trying toCloud Forest Blue Mechanism“To get on board. "The restoration of cloud forests helps the operators of hydropower plants to significantly reduce the costs of sedimentation management and to extend the lifespan of the plants so that there is no need to build more dams or produce energy in a less environmentally friendly way," explains Romas Garbaliauskas from Conservation International . The mechanism ensures that the power plants invest just as much in natural climate solutions as they gain in benefits. The key is not easy to find and also requires ongoing evaluations and long-term security, since investments are made today, but the benefits will only become apparent in the future. The program is now to be tested at three locations in Colombia.

For the time being, companies from all industries have committed to saving the forest in many ways, starting with the establishment of deforestation-free supply chains. The food company Danone For example, mangrove forests in Senegal are rebuilding, the Austrian cellulose fiber group Lenzing is involved in Albania with the support of the Austrian Development Agency. The industry's best efforts are driven by Forest 500, a rating agency of the British think tank Global Canopy, closely followed, relentlessly pilloried.

Started at the World Economic Forum in Davos earlier this year One trillion trees the latest pro forest initiative. The multi-stakeholder platform should bundle all initiatives in favor of natural climate solutions and thereby create synergies. It is also at the forefront of helping the breakthrough of the Decade for Ecosystem Restoration, which the United Nations proclaimed for 2021-2030. Finally, the one announced by Bronson Griscom could also be a success Roadmap for companies contribute. The forest expert wants to show them ways "how they can invest in natural climate solutions in order to develop climate-friendly business models and at the same time create jobs and income in rural areas". And that definitely sounds like a real win-win economy, nature and people.

The Comeback of trees

Afforestation: Forests for the World