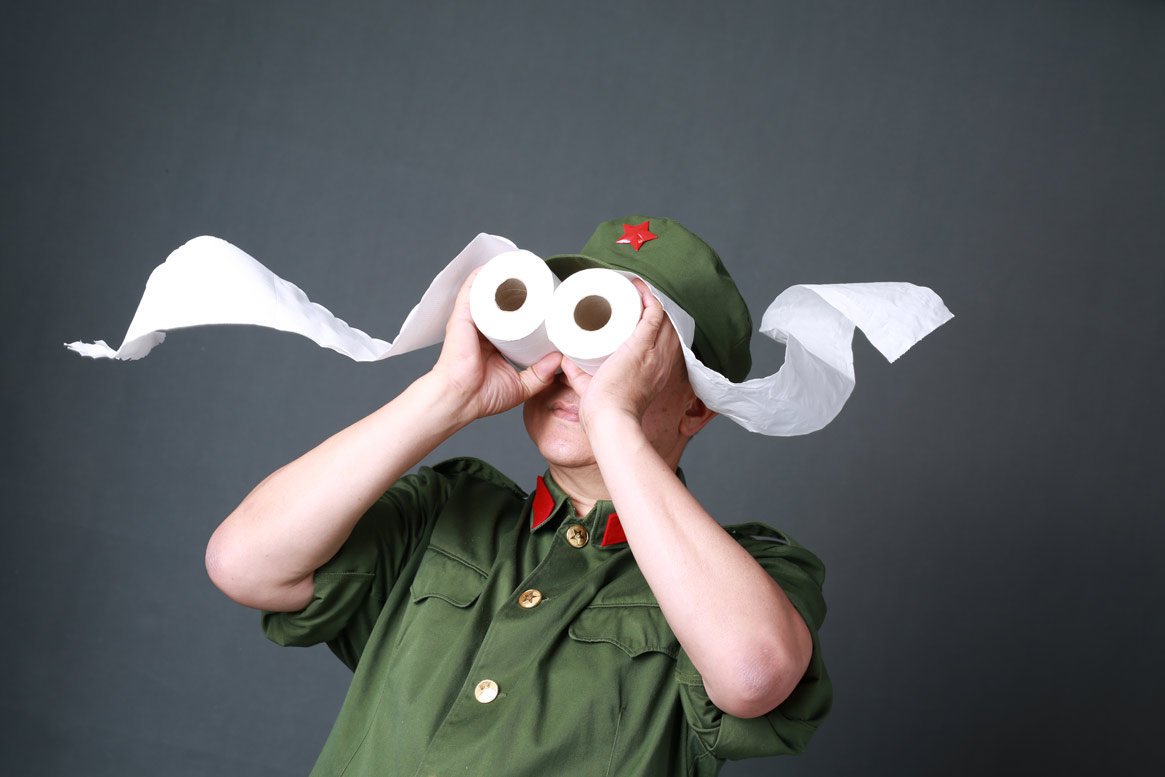 His name is toilet. Mister toilet. Jack Sim is clearly proud of this nickname, which has been with him for twenty years. The 64-year-old man from Singapore likes to talk about “poop”, “shit”, “loo” and “pee” with childlike enthusiasm, can be photographed with suction bells, toilet paper and chamber pots or even slips into a toilet costume for public appearances with sausage hat. For the film documentation "Mister Toilet" (2019) Sim even had himself filmed at a toilet session - discreetly through the frosted glass - while he pondered the toilet as a spiritual space and as the place of origin of good ideas.

Sanitary crisis: joking instead of being silent

The humorous handling of human excretion helps to break a taboo, explains the former building contractor: “Most people are embarrassed by the topic. But you can't solve a problem if you don't talk about it. ”And this problem is a serious one: according to the World Health Organization WHO and the United Nations Children's Fund UNICEF, two billion people live without their own toilet. They have to go to a publicly accessible toilet or, as around 670 million people around the world do, relieve themselves outdoors. This practice, also called "open defecation", is above all a rural phenomenon and is still widespread today, for example in Laos, Chad and Namibia. This can be risky for women and girls: if they go further in the dark for some privacy, they are at risk of falling victim to violence.

Interview with Jack Sim, "Mister Toilet" and founder of the World Toilet Organization

Much ado about a quiet place

16. December 2021
Jack Sim became Mister Toilet to draw attention to the blatant lack of toilets. He has been traveling the world on this mission for 20 years.

But Jack Sim is not only interested in the question "Where to go when there is an urgent need?", He also addresses the "Where to go, what is urgent?" According to the United Nations, around 3,6 billion people do not use "safe" toilet solutions: This means that their wastewater from open pits or leaky latrines ends up untreated in the environment.

Researchers at the University of California at Santa Barbara recently published a world map of water pollution in the journal Plos One. It depicts the input of wastewater that enters the sea over 130.000 water catchment areas. It shows that almost all coasts on all continents are polluted. Large amounts of untreated wastewater flow into the seas in hot spots such as India, China, Brazil, Nigeria and Bangladesh. But even with sewage treatment plants that greatly reduce microorganisms, there remains a problem: Increased nitrogen concentrations still end up in the sea and, according to researchers, threaten coastal ecosystems such as coral reefs and seagrass meadows. 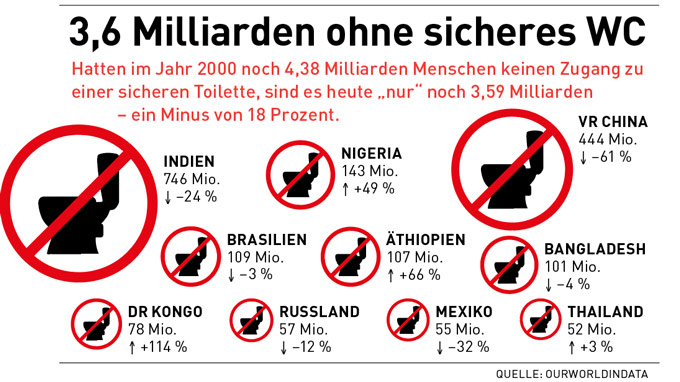 Sanitary crisis: toilets for everyone

In countries where excrement ends up in rivers or fields, often completely untreated, people can catch parasites and pathogens through food and drinking water. Bad sanitary conditions are associated with diseases such as cholera, dysentery or hepatitis A. This is especially dangerous for children. Almost half a million children under the age of five are said to die every year from sanitary-related diseases.

Jack Sim knows the lack of toilets, diarrhea and worms from his own childhood. He grew up in a slum in the 1950s, when Singapore was still comparatively poor. At that time, his family did not have a toilet, just a bucket. With the move into a social flat, the young Jack experienced the joy of a toilet with a flush and a sewer connection - pure luxury for him. In his early 40s he decided to campaign for better toilets with safe disposal for the whole world. On November 19th, 2001, Sim founded the World Toilet Organization WTO to bring the sanitation crisis to the public. The name resemblance to the World Trade Organization may seem like a coincidence, but it was just another clever gag sims. On the founding day of the WTO, he also called the World Toilet Day which was later adopted as the official day of the United Nations and has since been supported by prominent supporters such as Matt Damon, Bill Clinton and the band Coldplay.

Sanitary crisis: the challenge is growing

From today's perspective, the world will miss this deadline. In many poorer countries there is a lack of strategies to tackle the complex problem holistically, of clear institutional responsibilities, and sometimes even of the notion of what proper sanitation for people in rural or urban areas could look like. One thing is clear: the "gold standard" common in the cities of richer countries - a water closet with a connection to the sewer system and a sewage treatment plant - requires high investments. However, especially in poorer countries, governments are already struggling with the challenge of providing their residents with the necessary infrastructure of roads, electricity, water - and also sewage systems. And the conditions are not getting any easier. According to forecasts by the United Nations, around 2050 billion people will live in cities in 6,5, which would be 2,2 billion more than today. 90 percent of future urbanization is likely to take place in sub-Saharan Africa and Asia.

There are also new risks, as indicated by a new study by the Deutsche Gesellschaft für Internationale Zusammenarbeit GIZ. Accordingly, climate change will also exacerbate the sanitation crisis: On the one hand, floods and rising water levels can destroy toilets, latrines and wastewater infrastructure. On the other hand, the water for classic toilet solutions could be lacking due to extreme heat and drought: One flush requires six to ten liters of water, a person goes to the toilet about six times a day.

Sanitary crisis: there are successes

The world therefore not only needs significantly more toilets, but climate change-resistant, sustainable and affordable systems. According to the WHO, the global investment requirement for adequate sanitation is likely to be $ 105 billion a year - but every dollar, it is also said, would be rewarded with a five-fold return. Because, as Sim explains it briefly: "Toilets ensure a healthy, productive population and are cheaper than hospitals and medication."

In view of the still blatant lack of toilet facilities, the question arises: Has anything changed in the past twenty years? Yes, definitely: In 2001 the world had around six billion people, of whom 2,6 billion - i.e. more than 40 percent - had no toilet, today the earth has around 7,9 billion inhabitants and two billion (around 25 percent) without toilet. And the number of people who relieve themselves outdoors has been roughly halved, starting from 1,3 billion in 2001. The “State of the World's Sanitation“ report, published by WHO and UNICEF in 2020, highlights improvements in countries such as Ethiopia, Indonesia and Nepal, which have done a good job thanks to political will and partnerships. "It has gotten a lot better," says Mister Toilet, "but unfortunately we are still a long way from reaching our destination."

Loos of the world

The pictures come from the photo project Dollar Street of the Gapminder Foundation, which documents the possessions of families around the world.

Difficulties remain even in countries that are trying hard. India shows that. The subcontinent has made great strides in the past decade since Prime Minister Narendra Modi launched a massive toilet offensive in 2014. In just five years, around 110 million public and private toilets are said to have been built as part of the world's largest sanitary program. But that didn't solve the problem. An example: It was planned that people in rural areas would prefer to build latrines with double septic tanks, which would enable liquid manure production. Then one pit is used in each case, while the contents of the other can be converted into liquid manure, which can be spread on the fields - a safe and self-sufficient solution that makes the removal and further treatment of the wastewater unnecessary. However, researchers from the School of Public Health in Odisha found that this variant has often not been implemented. Many households would have preferred to build toilets that only store faeces, but not treat them, and do not always maintain the recommended distance from water sources - which creates environmental risks.

And not everyone who has a toilet actually wants to use it. To this day, toilets evoke negative associations in some people, some fear, for example, offending the gods. “For thousands of years people were told not to relieve themselves near their homes. And now they are suddenly supposed to use a toilet in their own house, ”explains social entrepreneur Bindeshwar Pathak - he is considered India's toilet guru - the culturally based resistance. India has officially been an “ODF” since October 2019, i.e. free from open defecation, but according to figures published this year by WHO and UNICEF, around 15 percent of the Indian population still relieve themselves outdoors: one percent of city dwellers and 22 percent of those in rural areas Living.

Well-functioning sanitation is a complex puzzle that preoccupies many players around the world - including development cooperation. the Austrian Development Agency for example, it supports the sanitary infrastructure in refugee camps in Uganda and Lebanon and invests in sewage treatment plants in Moldova. And the broad portfolio of the US development organization USAID includes the promotion of the sanitary business: For example, local toilet construction companies in Uganda and Haiti are trained and professionalized. In another project, women are trained to be shop assistants who are supposed to encourage people to buy affordable toilets. In turn, the German development agency GIZ is promoting the dissemination of sanitary systems that rely on “waste to resource”. These are systems that generate biogas, irrigation water and fertilizer from wastewater and faeces. There are also alliances like that Sustainable Sanitation Alliance, which invites experts from almost 400 member organizations to share best practice, or the Toilet Board Coalitionthat promotes the involvement of social start-ups and companies in the sanitary industry. Also the Bill and Melinda Gates Foundation is there: for ten years it has been supporting the development of new toilet solutions for poorer regions that work without a water connection and treat excrement. (Read more about innovations in the sanitary industry in the corporAID article "Small business, big business")

So there is a lot going on – but there needs to be a lot more dynamism in what is happening. In order to achieve goal 6.2 of the 2030 Agenda, "the speed at which safe sanitation is increasing must quadruple," warns the State of the World's Sanitation report. Mister Toilet, who, as he says, has been working on the global toilet supply “pro bono on a full-time basis” for more than twenty years, will probably hang on for a few more years. For the time being, there is no more than just short breaks in the beloved place of silence.