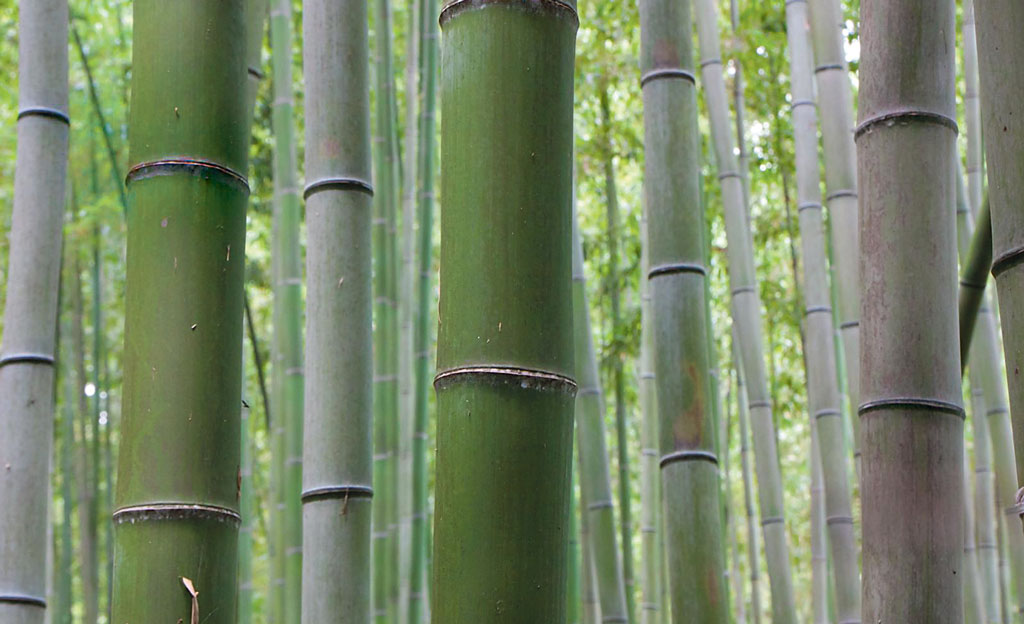 Four centimeters an hour, almost a meter a day: Bamboo can shoot up so fast. The entry as the fastest growing plant in the Guinness Book of World Records is impressively deserved. However, there is no such thing as “one” bamboo. More than 1.500 types of sweet grass have already been discovered. Some grow knee-high, others soar 30 meters and higher into the sky.

However, under ideal climatic conditions, only certain species set such a high speed that you can literally watch them grow. The plant is always extraordinary, as its numerous nicknames suggest: Bamboo is called a miracle plant, savior of the planet, divine plant or steel of the 21st century.

Markus Roselieb has long been convinced of bamboo. The Austrian who emigrated to Thailand runs an architecture and construction office in the city of Chiang Mai and designs buildings in which bamboo - along with other natural materials - plays a prominent role: "Bamboo is beautiful, strong, light, durable and a really sustainable material", he justifies his enthusiasm. In the past ten years, he has built around 50 schools, houses, research and conference centers with bamboo.

Since bamboo consists of tubes with thick outer walls, fiber fillings and chambers, it has outstanding technical properties: "Bamboo, for example, has a higher compressive strength than concrete, a lower weight than glass fibers, a higher tensile strength than some steel alloys and good acoustic and thermal insulation properties", explains Walter Scheufele, board member of the competence center Bamboo Technology Network Europe BTNE, which is committed to the commercial and industrial development of the giant grass.

Construction is carried out in many places with bamboo, which occurs in tropical, subtropical and also temperate zones. That's why it's not really popular. “Bamboo has a huge image problem. In the west it is considered a hippie material, in the tropics it is a building material for poor people whose huts do not last longer than two to three years, ”explains Roselieb. The people of the tropics still dreamed of houses made of wood, concrete and tin roof. The problem with bamboo is not the material, but simply ignorance, he explains. The grass is often harvested too early. “In the first few years, bamboo was like green asparagus, soft and very starchy. Pandas, elephants and insects feed on this. If you build with it, you get an unstable sugar house. ”Only when the plant is about four to five years old are the pipes sufficiently wooded and the fibers compressed so that they can be used like steel, if properly selected and pretreated. Then, according to Roselieb, a bamboo house can last 80 years or more.

18. December 2019
The Austrian Markus Roselieb builds buildings out of bamboo in Thailand, a "fascinating building material with an image problem".

In view of the high population growth in developing regions and the huge need for houses, the practical and cheap bamboo would have to play a larger role as a building material, experts agree. Also because bamboo is particularly suitable for areas prone to earthquakes and typhoons, because it is flexible and resonates.

An innovative, social housing program in the Philippines, which has been supported by the Hilti Foundation since 2013, relies on natural materials. For the “Base Bahay” project, they were looking for a practicable construction solution that combines affordable and disaster-proof living. A small house with two rooms, a bathroom and an outdoor kitchen was developed. The developers combine bamboo tubes with cement for the stable and fire-proof construction. More than 600 of these bamboo houses have already been built in the island state. As many as 12.000 houses are planned for the next five years. Not only the residents benefit from this: From the harvest of the bamboo to the transport to the processing, the added value remains in the country.

Bamboo can also be found every now and then in European homes and offices. For example as a floor covering: In the Mercedes Museum Stuttgart, for example, 7.000 square meters of bamboo flooring were laid, says Scheufele. “Since bamboo parquet is harder than wood, it is suitable for floors and floorboards both indoors and outdoors.” Visitors to Madrid's Barajas Airport can admire a lot of bamboo in one go: There, the bamboo type Moso was used for a ceiling construction of 200.000 square meters .

Every now and then the grassy raw material also appears on the road: The Kiel company My Boo specializes in bamboo bikes, which it also sells in Austria. When My Boo was fresh on the European market five years ago, the exotic material was "still very skeptical", says marketing manager Felix Habke, "We had to do a lot of educational work with dealers and customers at the time." Bamboo is now popular recognized in the industry because it convinces with the stability of steel and the lightness of aluminum. Customers would also appreciate the social added value: My Boo is cooperating with a social enterprise in Ghana that produces the frames from local bamboo.

40 young men glue, sand and paint the frames, which means they have “fairly paid jobs with prospects”, says Habke. In addition, proceeds flow into school construction and education projects. In Germany, the frames are assembled to make luxury bicycles (from 1.499 euros). According to Habke, they are satisfied with sales in the four-digit range per year. Bamboo bikes are an alternative to conventionally produced bikes, but they are a niche product.

If you take a closer look, you will find a whole range of products made from bamboo wood, extracts or fibers in supermarkets, drugstores and health food stores. These include cutting boards and cotton swabs, plasters and dishcloths, socks, shower gels and nursing pads. The Colgate Group recently introduced a toothbrush made of bamboo - so far this has been a product of rather smaller suppliers.

Bamboo is marketed as an environmentally friendly alternative to tree wood and plastic. There is a lot to be said for this: Bamboo stalks are ready to be harvested in a maximum of seven years, while hardwoods need several decades. And while a new tree has to be planted first, a quarter of the bamboo stalks can be felled in sustainably managed forests and plantations every year - without the stock shrinking. "In addition, bamboo stores significantly more carbon dioxide and produces more oxygen than a young forest," says Scheufele.

Some manufacturers claim that cotton swabs, plasters and toothbrushes made from bamboo are biodegradable so quickly that they can even be disposed of in organic waste or in a compost heap. With toothbrushes, the rule is to leave only the handle, but not the bristle head, to nature.

However, bamboo products do not always keep the promise of the ideal world: A test by the consumer protection organization Stiftung Warentest in summer 2019 showed that reusable bamboo coffee mugs are not the pure and sustainable product that environmentally conscious consumers want: most of the mugs tested contained harmful substances that were released at temperatures above 70 degrees Celsius. “Beginners were at work here. These companies have used conventional chemical products that dissolve at the temperature of coffee, ”explains Scheufele. “Because bamboo cups were a new product with no specifications, headlines like this came about,” he regrets the damage to the company's image.

To write off the material due to individual incidents would be short-sighted. Because bamboo could have a promising future ahead of it. It is time, says Scheufele, to develop bamboo as a raw material for mass markets and to market it better commercially. This could also benefit many countries of origin, in which bamboo today mostly grows “wildly” and is harvested by small farmers. In particular, Scheufele wants investors to take money in hand to develop “more difficult products” - so that, for example, bamboo can be used as a replacement for technical fabrics made of glass fibers and is also used more often as an alternative to petroleum-based plastics.

So it still needs some movement in the bamboo industry so that the plant can live up to its nickname as the "savior of the planet". It grows quickly all by itself anyway.

Bamboo grows on an estimated 32 million hectares of land worldwide. Around one hundred of the 1.500 known species are used commercially, including Moso from China and Guadua from South America. Much of the bamboo sold in Europe comes from China. Other large growing countries are India, Brazil and Indonesia. In countries such as the Philippines, Kenya or Ethiopia, bamboo is also planted to quickly replenish poor soil and to consolidate banks and slopes, as the plant's extensive roots protect it from erosion.

There are many different areas of application for tree-like grass: bamboo is used as a substitute for wood for floors and furniture, for sporting goods such as skateboards and ski sticks or for decorative items. Wind turbines, scaffolding and the interior of cars and yachts are also available in the light bamboo version. The plant can also be used energetically in the form of pellets or charcoal. Bamboo charcoal can also be used to purify water and remove odors. Pickled or cooked bamboo shoots are popular “forest vegetables” in large parts of the world, while bamboo leaves are prepared for tea. Ayurvedic and TCM products are made from sprouts and straws. Bamboo extracts can also be found in deodorants, shower gels and creams. Socks, underwear and plasters are made from fibers. The market research company Grand View Research estimates the bamboo market at around $ 69 billion (2018) and expects annual growth rates of five percent by 2025.