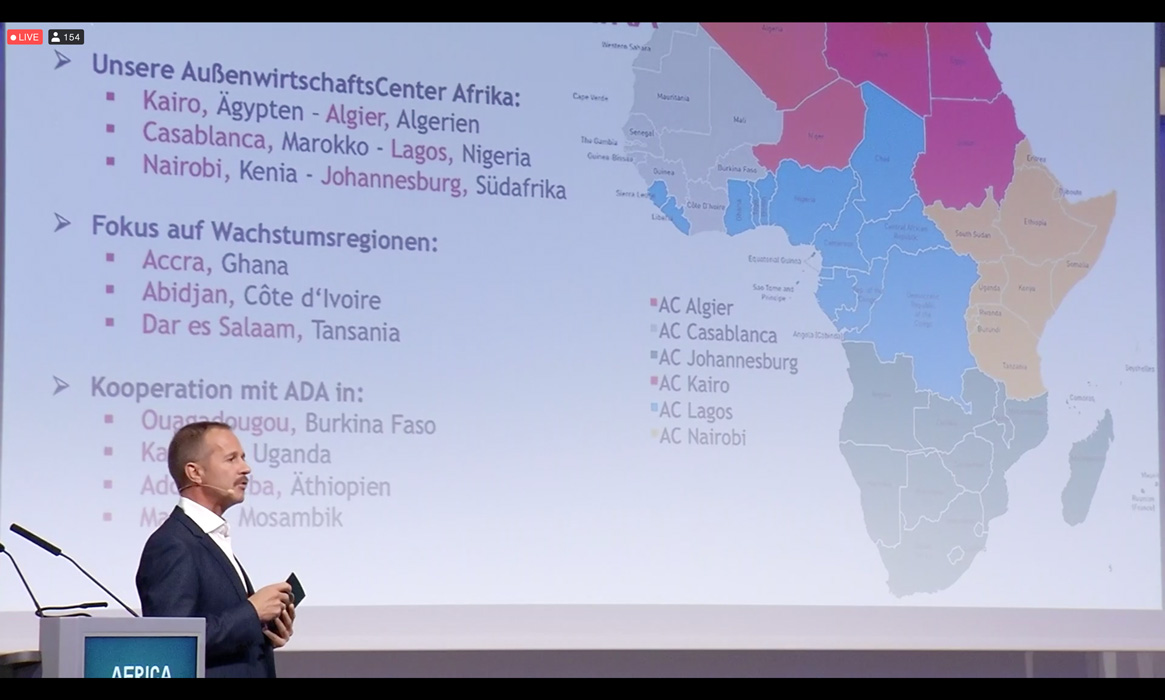 A few days before the event on November 22nd, it looked as if this year's Africa Day would take place as a hybrid event - i.e. with some participants who could talk to each other on site in the premises of the Austrian Chamber of Commerce WKO, as well as others attending from their screens. Then came Lockdown 4.0, and the largest Austrian discussion forum for African-Austrian economic relations was completely relocated to virtual space. Martin Woller, who has only been Regional Manager for Africa in the WKO for a few months and is therefore responsible for the event, was not upset. “I was in Cairo, Lagos and Libya for many years. There you learn the flexibility that you need these days to organize Africa Day, ”he said at the end of the event. And then added an appeal to local entrepreneurs: “Africa is not just the continent of the future, but also of the present. You can do good business there today, and not just in 15 years. "

In terms of content, the keynotes, video recordings and panel discussions were repeatedly about sustainability. Michael Otter, head of the Außenwirtschaft Austriathat Green Tech is being seen more and more as a special Austrian strength day by day, even in Africa. Above all, the patchy energy supply on the neighboring continent offers great opportunities - for providers in the field of solar and wind energy, for example.

Digitization was a second main topic. The business delegates from Kenya, South Africa and Egypt reported first hand from the three African start-up hotspots and illustrated with tangible examples which innovations the continent can come up with - such as the transparency of blockchain technology is brought into the East African diamond trade. Many of the African speakers also came from the tech sector and provided information about e-commerce and fintech solutions from Nigeria, among other things.

The third determining topic of the day was the urgently needed infrastructure expansion, for example in the railway sector. The economic delegate in Cairo, Georg Krenn, was able to report on a new high-speed line that is to lead from the Red Sea to the Mediterranean and is known as the "Suez Canal on Rails". Siemens Mobility was awarded the contract for the four billion euro project, which could also create opportunities for Austrian companies in the sector.

According to Patrick Sagmeister, the deputy head of the Außenwirtschaft Austria, the mega-challenges on the neighboring continent can be combined very well with the strengths of Austrian companies. the Außenwirtschaft Austria is therefore sticking to its Africa strategy despite the upheavals caused by the corona pandemic: By 2025, five percent of Austrian exports are to go to Africa and the number of branches in Africa is to be increased by 50 percent.

According to Michael Otter, Africa “should not be missing in any export strategy for 2030”. There is no doubt that Africa is a “very difficult market”, but “nine out of ten of our companies there are already making good profits”. In addition, the head of foreign trade also emphasized that Austrian companies should not only look to the neighboring continent with the exporter's perspective - even when it comes to innovation and business models, there will be no way around Africa in the future.

After the half-day program on the virtual stages, B2B discussions between Austrian and African companies took place over two days.