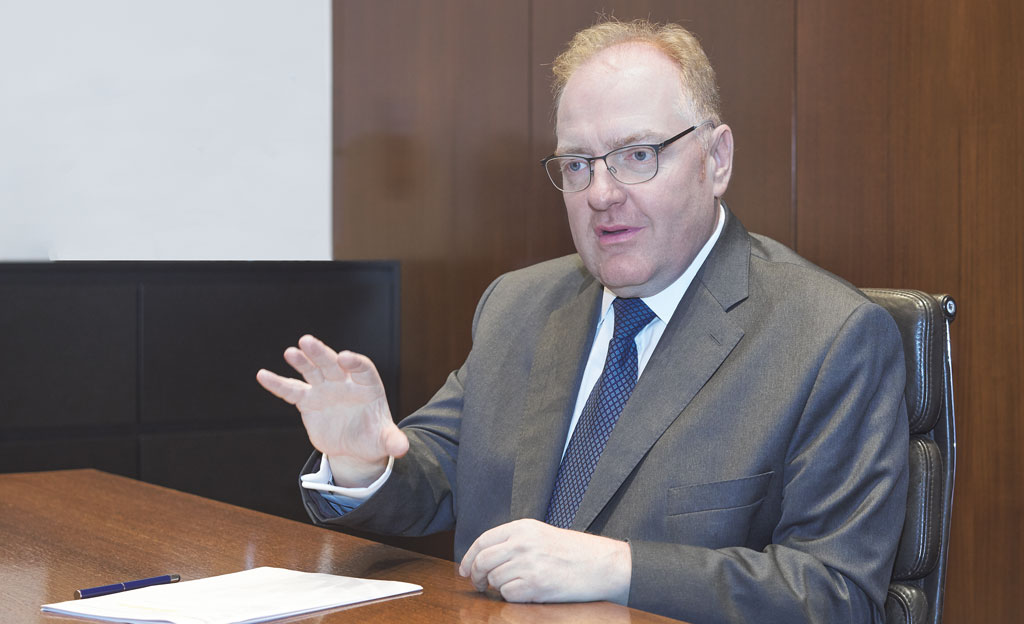 What does globalization mean for Austria?

Bern Head: I associate the terms responsibility, opportunities and risks with globalization. Austria is a small economy that relies heavily on exports. Most of the economic growth is due to the internationalization of domestic companies. Without these we would not be able to maintain our current prosperity.

Where do you see the great growth opportunities for Austrian foreign trade?

Bern Head: Around 70 percent of our exports go to the EU, almost half of them to Germany. This is primarily due to historical reasons. As part of our export insurance business, however, we are now noticing that a large number of companies in the environmental and technology sector are increasingly focusing on new markets. We see great growth opportunities in Asia: China is the predominant topic here, but there has also been a lot of dynamism in Vietnam and Indonesia in recent years. Brazil has long played an important role in Latin America as the largest economy, and Mexico has also developed well recently. A lot is happening in Africa too, but from a very low level. There is a lot of catching up to do in areas where the Austrian economy is well positioned: health, environmental technology, infrastructure.

"In my eyes, OeKB is very international
competitive."

Why do Austrian companies often find it difficult to internationalize in difficult markets?

Bern Head: The small-scale nature of the economy is a key challenge. It is comparatively difficult for SMEs to gain a foothold globally, even if they have the right technologies and products. And tapping the market in developing countries is even more complex and expensive. Because the order acquisition is not done with a single visit - you have to work intensively on these markets! This is not possible through a long-distance relationship, companies have to be on site themselves or find a reliable partner. In addition, due to their small-scale structure in international business, Austrian companies are often limited to the role of supplier and, with a few exceptions, cannot handle large orders alone.

What contribution does OeKB make to the internationalization of the Austrian economy?

Bern Head: Our core business is to hedge political and economic risks in foreign business with the mandate of the Republic of Austria and to refinance investments and holdings abroad - where there is no market for private insurance. An essential instrument is export financing, where we can arrange very cheap and long-term financing through our house banks. We are at the forefront of European export credit agencies in many countries, and sometimes we have volumes similar to Germany, an economy ten times the size. In my opinion, OeKB is very competitive in international comparison. The export promotion systems in most countries run insurance and financing completely separately from each other - our great advantage is that we can offer both from a single source. Within the framework of the requirements of the EU and OECD, which strive for a level playing field for the export economies, OeKB is perhaps even a little more internationally oriented than some of our peers.

How does OeKB adapt its offer to changing realities?

Bern Head: This year we expanded our product range to create incentives in the area of ​​climate-friendly investments. Our Exportinvest product, with which we support domestic investments that lead to more exports, has been expanded to include the Exportinvest Green component. We usually finance to the extent of the export quota. That means, with an export quota of sixty percent, we can do sixty percent Finance domestic investment. With a particularly environmentally friendly investment, we can increase this quota by XNUMX percent. In addition, two years ago we set strong accents in the direction of Africa: The coverage ratios were raised, the country limits raised and the terms extended. That means there is a lot more scope for doing business with African countries. In the majority of countries, we have not exhausted the limits and have enough room for improvement. Of course, there can always be individual cases where we come to the limit in terms of technical limits. The Ministry of Finance generally reacts very quickly and would like to avoid that exports do not come about due to limit restrictions. At the same time, concentration risks in the insurance business are the worst thing you can have.

What is the intention behind the OeKB Sustainability Bond?

Bern Head: After the Federal Financing Agency, we are the second largest player on the Austrian capital market in the area of ​​bond issues. And we have seen that we can expand our presence on the subject of sustainability. We have created a framework with seven social and four ecological criteria. Our first issue this year went very well: Within a few hours, there was an interest of 1,8 billion euros. We closed the books at 500 million euros because we also need the corresponding sustainable investment projects. These range from the medical sector to environmental technology and drinking water supply to the financing of small and medium-sized enterprises in order to create employment. We assume that we can build up a regular capital market presence with products like the OeKB Sustainability Bond - provided, of course, that the market allows it and investors have an appetite.

"The SDGs have a real business impact and are not greenwashing."

To what extent do the 2030 Agenda and the SDG global goals represent new market opportunities for companies?

Bern Head: In my perception, this is seen much more positively today than in 2015, when the international community adopted the SDGs. Many companies now perceive the SDGs as a positive differentiating factor and as an orientation framework on which they can align their business strategies. In addition, many companies have recognized that sooner or later they will experience disadvantages on the capital market without sustainability ratings, because investors will decide against them and for competitors who are more closely and, above all, more understandably oriented towards the 2030 Agenda. Therefore, the SDGs have a real business impact and are not greenwashing. And Austrian companies feel that strongly, especially when they appear on international markets. For OeKB internally, the SDGs were a criterion from the start when evaluating which projects we are allowed to secure and finance and for which this is not possible. Today we analyze and document exactly which of the 17 goals individual business cases contribute to.

"I would like development cooperation to receive more political attention."

You mentioned the SME structure of the domestic economy earlier: What can OeKB do to help more companies become active internationally?

Bern Head: A distinction has to be made here: The markets in the European Union represent marketable risks that the private insurance sector covers. Our customers are companies that operate beyond these markets. And here you need a certain size, structure and also products that are in demand in more difficult markets. For such customers, we offer our services on behalf of the federal government. When it comes to helping companies offer their specific products for the first time in such a market, there are institutions like that Außenwirtschaft Austriathat can accompany a market development.

What role does the Austrian Development Bank OeEB play in the OeKB Group?

Bern Head: The Austrian Development Bank is the commercial part of development cooperation, so it does not give away money, but finances projects that are economically viable. The development bank's mission is primarily poverty reduction. The OeEB is a comparatively young organization that has developed a great position in the European context in ten years. With a portfolio of around one billion euros, OeEB has reached a critical size and invests around 300 million euros in new projects every year - the number six in Europe is the size of the portfolio. Their strategy was further developed this year, regionally towards a stronger focus on Africa and thematically in terms of environment and gender. Of course, one can awaken more understanding for expenditure in the area of ​​development policy, especially in business circles, if one also achieves positive effects for the Austrian economy. Ideally, the OeEB creates the bridge between poverty reduction and added value for domestic companies.

How do you see Austria overall in terms of development finance?

Bern Head: If you look at the financial cooperation, then soft loans are of immense importance and also have the same effect. There are many positive examples to prove this: for example in Indonesia, where Austria has been very active with soft loans in the past and domestic companies are now also implementing larger, commercial projects. What Austria lacks, however, is unbound, bilateral financial cooperation. Such instruments have much more tradition in Scandinavia and the Netherlands. I would hope that development cooperation also receives more political attention. Ultimately, however, this is a political decision - the OeKB Group is definitely open to new initiatives.

Helmut Bernkopf has been a member of the board of 2016 since Austrian control bank. The graduate of the Vienna University of Economics and Business previously held various management positions at Bank Austria, including in Eastern European business, before moving to the Management Board in 2008.

Oesterreichische Kontrollbank OeKB was founded in 1946 by the Austrian banking sector in order to rebuild domestic credit after the Second World War. In 1950 the federal government commissioned the hitherto pure service company for the banking industry to secure and, from the 1960s, to finance the export business of Austrian companies. Today, OeKB is the central point of contact for financial and information services for the export industry and the capital market. Her area of ​​responsibility includes export, tourism, capital market and energy market services as well as development finance. The latter is managed by the OeEB, an Austrian development bank founded in 2008, a wholly-owned subsidiary of OeKB. With more than 460 employees, total assets of EUR 2018 billion were reported in the 28,7 financial year and a total result of EUR 27 million was generated.The liability volume under the Export Promotion Act was EUR 26,3 billion.