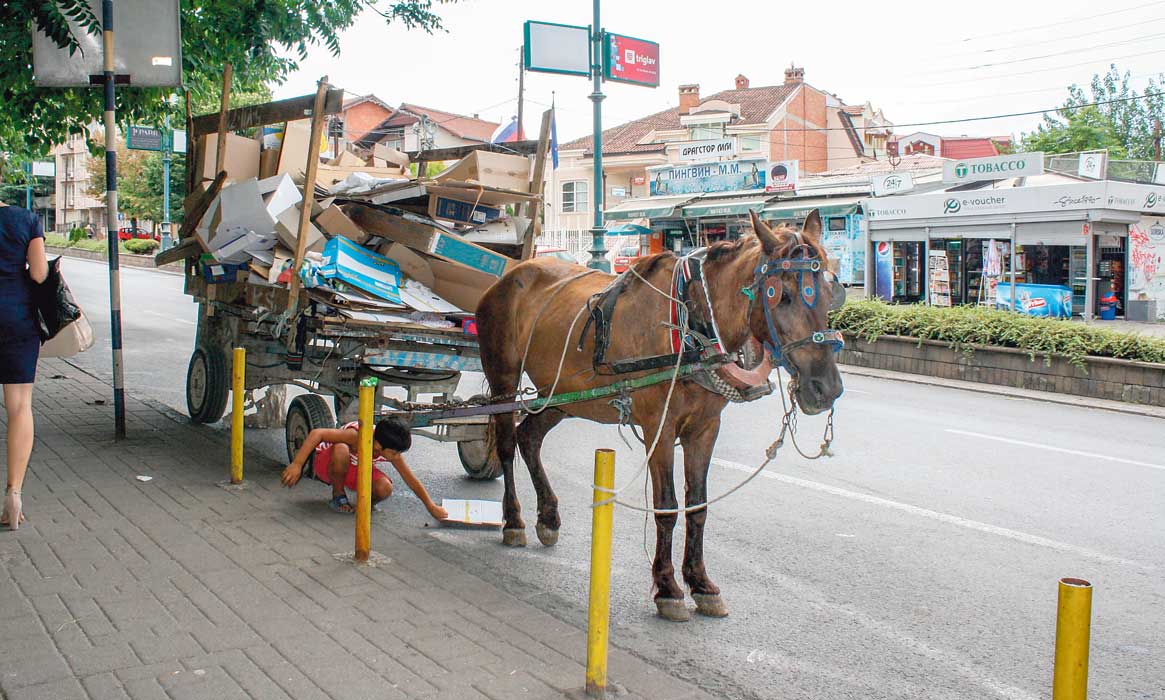 Heavy equipment had to be deployed in February in order to cope with the masses of rubbish that had accumulated in the Potpecko reservoir in southwest Serbia. Two barges drove down the lake to lift the thick layer of rubbish, while cranes and construction machinery helped from the shore. Heavy rains at the beginning of the year ensured that the inflowing Lim brought in vast amounts of rubbish from wild landfills that had emerged on the banks in Serbia, Montenegro and Bosnia.

An environmental disaster that is unfortunately not an isolated incident in the Western Balkans. The entire region has an immense waste problem. In many places, garbage ends up in the great outdoors and the realization that waste can be regarded as recyclable material is not very widespread. So the catch from the reservoir ended up again in a landfill.

Starting point of a Lab of Tomorrow: problem with potential

A lot is about to change here - thanks in part to a new initiative that primarily aims to recycle biological waste and to create a win-win situation: for the environment in the Western Balkans and the companies involved. These are currently coming together at the first Austrian Lab of Tomorrow, one from German development cooperation Methodto find innovative market-based solutions for specific challenges in developing countries and to implement them.

The kick-off for the Austrian lab took place as part of the corporAID conference “Global Green Recovery” took place in January of this year. The rest of the process follows the structure that the Lab of Tomorrow, which started in Germany in 2016, is already in 14 projects has tried. Methodically, one orientates oneself on design thinking. Above all, this means that the focus is on the needs of customers and end consumers as well as openness and creativity. “We don't know at the beginning what will come out in the end. In Design Thinking, you approach this with the attitude: Trust the Process, ”says Hans Joachim Zinnkann, who works at the German Society for International Cooperation CHALK that from German Ministry of Development assigned project Lab of Tomorrow is jointly responsible.

The starting point of every lab is a development challenge, the commercial potential of which is identified in the course of several months of user-centered research. Then the so-called innovation sprint continues. This is an interactive workshop lasting several days in which representatives of different companies and organizations - especially from the region in focus - come together to develop ideas and work out sustainable business models. In the last step, these are refined in a three-month test phase followed by a pilot phase. “It is important that those who have good ideas are also commercially successful. After the Innovation Sprint, we offer intensive coaching and pitches in front of experts, ”said Zinnkann. If the process has gone well, the establishment of market-ready joint ventures is the crowning glory.

Zinnkann mentions the Lab of Tomorrow as an example of success Number six from 2017, which was about improved access to affordable and reliable energy in rural Uganda. In a first step, the challenge was divided into manageable sub-categories - such as off-grid solutions for agriculture. Building on the research results, the multi-day Innovation Sprint took place in Munich, in which 42 representatives from 25 companies took part. They developed six business ideas, four of which ultimately hit the market.

Lively discussions at the Lab of Tomorrow for Uganda.
The result, among other things, is a solar-powered cooling system for Uganda's dairy farmers.
Previous
Next

Among them was the Ugandan-German joint venture Wamala Energy, which lends mobile cooling solutions - solar-powered machines for making ice cubes - for the transport and storage of milk. Thanks to the longer shelf life of the milk, farmers can increase their income and customers benefit from better hygiene standards. It started with two dairy farmers in the summer of 2019, tens of thousands of liters of milk have now been cooled - and we are currently working on a cooperation with a network of hundreds of farmers' associations. “The business works,” says Zinnkann. What also pleases him: "The consortium idea - the merger of several companies from different countries - was also successful here."

The Lab of Tomorrow also turned out to be very promising Number eight from 2019. The big challenge was the overflowing plastic waste in Thailand and the question of how to reduce or recycle one-way packaging. At the Innovation Sprint in Bangkok, 63 participants from 22 companies worked on solutions, developed six business models - and then came Corona. On the one hand, the pandemic gave the topic even more weight due to the additional mountains of plastic that arise for reasons of hygiene, but also because of the large number of food deliveries. On the other hand, the ideas developed in Bangkok are pending, the business model of a reusable cup will not be pursued for the time being due to corona-related hygiene regulations. In addition, travel restrictions make the next steps more difficult, but according to Zinnkann, the teams are still highly motivated.

The latest innovation sprint, which is about Health solutions for Ghana took place online at the beginning of March. “These workshops live to a large extent from direct collaboration on an equal footing, that is, from people from different industries coming together and boundaries falling,” says Zinnkann, regretting the difficulties that the online exchange brings with it. At the same time, however, it was also possible digitally to promote the necessary liveliness and creativity so that the process can continue successfully.

Lab of Tomorrow for the Western Balkans

The first Austrian Lab of Tomorrow is expected to hold its multi-day workshop in June, whether physically or online depends on the Corona situation. But what is already clear: the Upper Austrian one Cleantech cluster Thanks to its technical expertise and its bridging function, it brings the interest of Austrian business into the process at an early stage. In addition, the Austrian Development Agency ADA, the Austrian Research Promotion Agency FFG, corporAID and the Lab of Tomorrow team from Berlin are already involved in the process.

For their first task - naming the specific challenge and its potential - the discussions at the kick-off event already provided essential clues: In the Western Balkans, garbage is collected in most cities, but rarely in rural regions. In Kosovo, only about half of the households can count on garbage collection. The collected waste is mainly dumped on municipal - sometimes illegal - landfills. There is hardly any separate collection and recycling, and if so, then only for glass, plastic or paper. As a rule, organic waste is neither treated nor composted.

However, awareness of the problem is increasing, including among political decision-makers. Because as part of the EU accession process, the candidates must also meet certain standards in the field of waste management. For its part, the EU has promised the states subsidies as part of the European Green Deal. Systems for the collection and separation of waste are now being designed, in particular the amount of biogenic waste on landfills is to be significantly reduced. And Serbia had a new, comprehensive one last year with the support of the Austrian Federal Environment Agency Waste strategy adopted.

Interview with Hans Joachim Zinnkann, senior project manager at the Lab of Tomorrow

25. March 2021
Interview with Hans Joachim Zinnkann, Senior Project Manager for GIZ in the Lab of Tomorrow project, about success factors and future visions.

From a local point of view, Sofija Bogeva expressed great interest in the Lab of Tomorrow at the kick-off. She directs that Skopje Lab, an innovation hub in the north Macedonian capital, which is dedicated to waste issues, among other things. “New solutions for waste management in the Western Balkans can make a significant contribution to reducing emissions, but they can also create green jobs and local development,” she says. Bogeva hopes that the lab will "expand the cooperation between Austrian firms and companies from the Western Balkans, intensify the transfer of knowledge and create new jobs here".

Austrian companies are starting from a good starting position. Austria is already a leading investor in the Western Balkans, and domestic companies are internationally recognized as specialists in the field of waste technologies. "Austrian companies should use their good reputation, the accumulated knowledge and their network advantages in the Balkans," said Arnold Schuh, head of the Center for Emerging Markets and CEE at the Vienna University of Economics and Business, at the opening event.

As co-organizer of the lab, Christian Maurer, responsible for the environmental technology area at the Cleantech Cluster, is committed to this. He sees the initiative as a "strong driver for our efforts to promote innovation processes in the field of sustainable energy and environmental technologies and to expand the position of our cluster companies."

Visions for the Lab of Tomorrow: from the Balkans to Africa

The region is also well known by ADA. “The Western Balkans is a priority region for us. Last year we carried out a pilot project on frugal innovation together with the FFG, ”says Edith Mychalewicz, who is in charge of the topic for ADA. She also emphasizes that the existing offers for the start-up funding of projects should be considered and communicated in the process from the beginning, and explains: “With the instrument of economic partnerships, we have been promoting development-relevant projects in the Western Balkans for years. We are also counting on a few applications for the Lab of Tomorrow. ”In the long term, the aim of ADA is to implement a Lab of Tomorrow for a challenge in an African country. Hans Joachim Zinnkann welcomes the enthusiasm and hopes that the first Austrian lab will also help with the scaling of the entire concept.

Austrian companies have the opportunity to join the initiative up to the Innovation Sprint - and thus the opportunity to open up new markets and innovatively develop their own business model with the help of new collaborations. In addition, the following simply applies: Trust the Process.

25. March 2022
"Frontiers in Social Innovation" is a practical and multi-faceted guide for social enterprises.