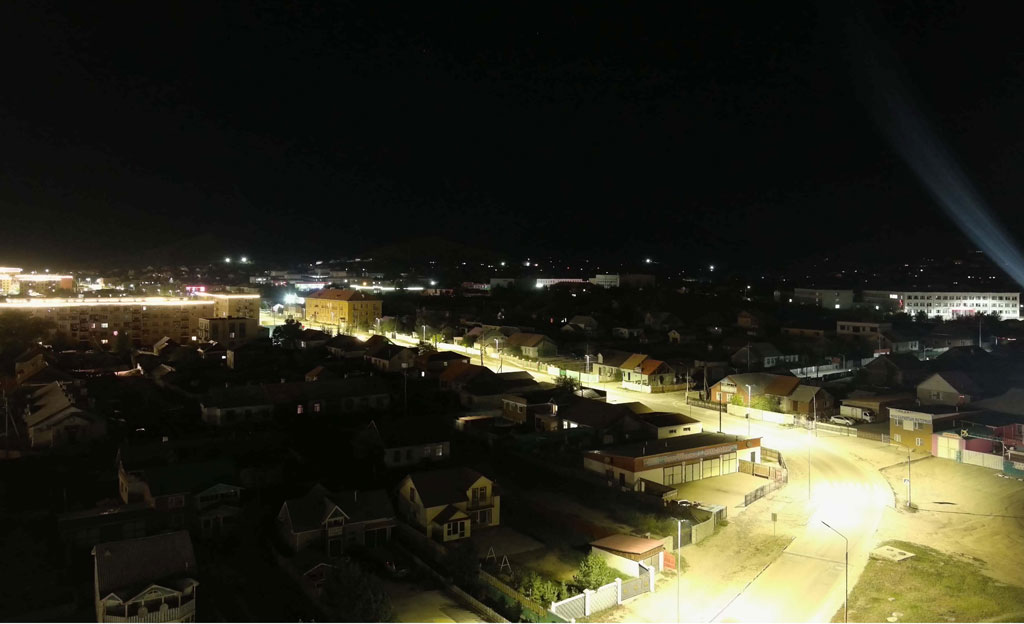 Cape Verde The island state is fighting its chronic water and energy shortages with international help. In June 2021, phase II of the seawater desalination plant of the public water and electricity supplier Electra went into operation. The entire system will provide 140.000 cubic meters of drinking water per day for the capital Praia with 10.000 inhabitants and, thanks to the reverse osmosis technology used, is comparatively economical in terms of energy consumption. The 6 million euro project was about a OeKB soft loan financed and by the UNIHA Wasser Technologie GmbH built turnkey in Linz.

Mongolia Street lighting is also a development factor. Therefore, in 2019, the Mongolian government issued the Zumtobel Group in Dornbirn was commissioned to provide light on streets and squares in the poorer northern provinces of Darkhan-Uul and Selenge - including planning, training and regular maintenance. At the end of 2021, the lighting company delivered the last batch of a total of 12.600 LED street lights and light poles on schedule. Most of the systems are already in operation, the rest are currently being installed. The OeKB financed the project through a Soft loan.

Belarus Not least because of a high accident rate, the Belarusian government would like to improve road safety in accordance with international standards. Supported on behalf of the European Bank for Reconstruction and Development MC Mobility Consultants with NAST Consulting (both from Vienna) and Civitta Belarus the traffic authority in the improvement of the road construction standards, the establishment of reports on traffic accidents, the certification of auditors as well as the creation of a strategy and a manual on road safety.

Liberia The government of the densely wooded country is striving to use the REDD + climate mechanism and, through forest protection and promotion measures, CO2-Selling emission rights. Created for it Geoville from Innsbruck and their Swedish partner metric a national forest inventory as early as 2015. In a further step, the consortium set up a satellite-supported forest and land cover map with funds from the Forest Carbon Partnership Facility. It provides the authority with high-quality spatial and statistical data for the continuous monitoring and evaluation of national forest resources.

Malawi The drinking water supply in the cities of Mzuzu and Ekwendi is reaching its limits. A EUR 20,5 million loan from the European Investment Bank (EIB) allows the responsible Northern Region Area Water Board to take some quick action. The sustainable use of funds has been guaranteed since 2017 Posch and Partner Consulting Engineers on behalf of the EIB. The Innsbruckers supported the water supplier with the planning of weir systems, a water treatment plant, the elevation of the Lunyangwa Dam and the planning and implementation of a groundwater drilling program.

Albania Thanks to donor funds coordinated by KfW, Albania has had a nationwide master plan for the water sector that is unique in the region since 2013. For the municipal infrastructure, this provides for investments of 5 billion euros by 2040. Supported on behalf of KfW Setec engineering the General Directorate for Water and Wastewater in Tirana is currently already in its 5th installment. For investments amounting to 40 million euros in the coastal cities of Vlora and Saranda as well as in Fier, the Klagenfurt-based company draws up plans, helps with tenders and supervises construction work until acceptance.

Participation in energy expansion in Uzbekistan and Nigeria

Uzbekistan Uzbekistan has large reserves of natural gas, on which energy generation is based. Several development banks now want to support the government in developing the gas sector. The aim is better supply and higher added value in the country. Placed on behalf of the Asian Development Bank ILF Consulting Engineers in cooperation with Roland Berger for this purpose, after one year of work, recently presented an extensive gas master plan, which shows several scenarios for investment requirements in the gas infrastructure (extraction, transport) including effects on operators and the climate.

Nigeria As part of its “New Deal on Energy for Africa” strategy, the African Development Bank has provided financing of 100 million dollars for the rehabilitation of the two privately owned hydropower plants Kainji and Jebba in Nigeria. With 1,3 gigawatts, they represent the most powerful power plant complex in the country Andritz Hydro the contract to modernize the Jebba machine set that has been out of service for years as a result of a major fire. The order, worth more than 30 million euros, is expected to be completed in two years.

Here you can find reports about international consulting projects in developing countries 2020, 2019