Start Magazine Global.business Reframing Africa: Too much black and white 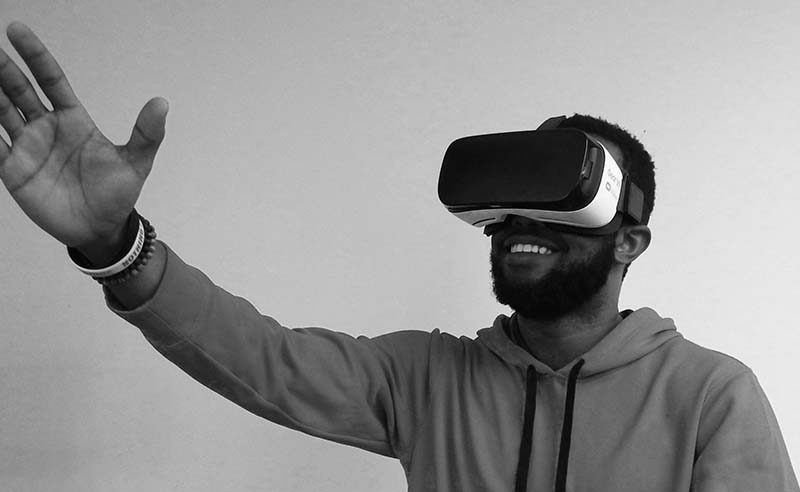 Veye Tatah still remembers her arrival in Dortmund, in western Germany, more than 30 years ago: "I was confronted there, through television or in the form of posters, with images of Africa that I didn't even remember from my childhood and youth knew. I had never seen malnourished children with flies in their eyes in Cameroon.”

Despite the culture shock of the time, the entrepreneur still lives in Germany and publishes the Africa Positive magazine there. Even today, she locates a dominant image of Africa that puts other narratives in the shade: “The first thing that most people in Germany or Austria associate with Africa is poverty. This image is extremely resistant, because anyone who grows up here is constantly told that black is poor. That happens in schools, in advertising, on donation posters.” Developed cities and educated people were missing from these depictions: “You only see poor children begging – and that runs deep,” says Tatah. Poor, violent or a place of longing for exotic dream trips - the framework for depicting Africa is narrow in the German-speaking world.

In fact, poverty is still a major problem in many parts of Africa. But at the same time it is just one aspect among many that Western minds often project across the continent. The purely crisis-focused images ignore current, positive developments, do not do justice to the diversity of the continent - and indirectly impede Africa's further development.

Because the economic effects of negatively exaggerated and generalized images of Africa should not be underestimated. Austrian companies exported goods to Africa with a total value of 2020 billion euros in 1,7. That is less than to Sweden and accounts for only about 1,2 percent of the total export performance. In a study presented at the Africa Day of the Austrian Chamber of Commerce in 2019, its author, the German economist Philipp von Carlowitz, emphasized that Austrian companies lack a local presence and the willingness to get involved in the local markets and to work them effectively. According to Veyeh Tatah, the reason for the self-consciousness that many local entrepreneurs feel about Africa is obvious: “As an entrepreneur, would I put money in countries where, according to the pictures, everyone is walking barefoot and, to put it mildly, there is chaos? Certainly not."

The Johannesburg-based organization Africa No Filter, which aims to successively change stereotypical narratives by promoting diverse reporting from the continent and research, published a "Business in Africa Narrative Report" in February. For this study of business coverage of Africa in international media, a keyword analysis of 750 million stories about Africa in both inside and outside African media was conducted. It became clear that the economic coverage of Africa in media outside the continent is much more negative than in African countries themselves, it primarily refers to the three dominant countries South Africa, Egypt and Nigeria and that the media attention is very much on the measures of African governments - instead of about companies – lies.
According to Africa No Filter CEO Moky Makura, “The troubled images of Africa that do not allow Africa itself to act are a global narrative. So the same patterns can be found in France, China, the Middle East or the USA, for example. However, framing is particularly problematic in German-language publications.” This is also underscored by a large-scale analysis of German reporting on Africa by the media scientist Lutz Mukke from 2009, entitled "Journalists of Darkness". Referring to the Austrian media, the Africanist and communication consultant Martin Sturmer comes in his work “Afrika! Plea for differentiated reporting” (2013) to very similar results.

criticism of the aid industry

According to Veye Tatah, in addition to crisis-oriented journalism, development cooperation also bears a share of the responsibility: "If European governments claim to want to promote economic development in Africa, they should stop supporting aid organizations that highlight Africa's poverty," said Tatah.

The fundraising on which these campaigns are based is an integral part of development cooperation and a main financial pillar when public funds are not sufficient. It becomes problematic when excessively emotional fundraising campaigns evoke feelings of guilt and the depiction of need and misery is disproportionate to the information conveyed and the participation of those affected. In a manual called "How to write about Africa", Africa No Filter draws attention to various problematic campaigns, including those by Unicef ​​and the World Food Program.

There are positive developments in the cultural sector in particular. But that about the African music scene more and more attention in other parts of the world and their protagonists like Burna Boy adorn the covers of Western lifestyle magazines and win Grammys, is not enough according to Moky Makura: "This purely cultural focus in its own way also feeds the cliché that Africa known primarily for his music. But Africa also wants to be noticed in the area of ​​technology and investment.”

Makura's Africa No Filter organization, founded in March 2020, has big plans to change the one-sided narratives: Young African content creators and media professionals will be supported in telling new, multi-faceted stories with up to 20.000 US dollars. The in-house media agency Bird supplies African media with stories on topics such as innovation, art or finance. At the same time, Africa No Filter sees itself as a watchdog that finds and documents negative examples. One media practice is striking: "Instead of telling stories related to events and countries, a trend for the entire continent is often constructed from individual phenomena," says Makura. She cites the example of the Ebola epidemic in 2014 in the four West African countries of Guinea, Sierra Leone, Nigeria and Liberia: “In the face of headlines about 'Ebola in Africa', many western tourists canceled their trips to Kenya, South Africa or Egypt – from Afraid of getting infected, ”said the Nigerian.

In the future, Makura and her seven employees will also pursue the claim of significantly expanding the narrative framework for Africa in the virtual world: At the end of last year, a cooperation with Meta (Facebook) was launched, which is entitled “Future Africa: Telling Stories, Building Worlds” is intended to counteract stereotypical images of Africa. African storytellers who work with virtual, augmented or mixed reality are supported. For Jessica Hagan, director of arts and culture programs at Africa No Filter, the multitude of applications shows “that Africa is also at the heart of global innovation and technology trends that are redefining the way stories are told and experienced “.

The news agency afrika.info, based in Oberndorf near Salzburg and founded by Martin Sturmer in 2007, also provides content for differentiated reporting. Sturmer has been working intensively for years on setting up and expanding a network of correspondents of African journalists, which today has 150 contacts and whose information he is making available to more and more companies. Investment opportunities in Kenya's start-up scene, the food crisis in Zimbabwe, environmental problems caused by the increasing demand for charcoal, African online shops with steadily increasing purchase numbers or the latest figures on corona developments in Africa - problems and (entrepreneurial ) Success reports are presented equally. The tone: calm. "But there is still a long way to go before the stories of technological developments and successful start-ups and companies reach us in the media canon," Martin Sturmer points out.

4th April 2022
According to the Africanist Martin Sturmer, stereotypical images of Africa are based on specific crises.
Martin Sturmer, afrika.info
The doctor of African Studies has been dealing with images of Africa since his student days.
To the website
Economy in Africa, Katja Scherer
The business journalist has been writing on her blog against stereotypical depictions of Africa since March 2020. In 2021 she was awarded the Golden Blogger Prize for the best topic blog.
Read more
Previous
Next

Katja Scherer is also committed to diverse reporting on Africa. The German journalist runs the Economy in Africa blog, subtitled Facts instead of Prejudices. Slums in Nairobi, children's homes, well projects - on earlier research trips she too first experienced those aspects of African reality that the development perspective likes to present. On later trips, she broadened her perspective and consciously sought contact with African start-ups and looked at climate protection projects on site. In doing so, she does not want to downplay or conceal the problems of the continent. These are currently becoming clear, for example, in parts of West and Central Africa that are characterized by political unrest. In the past few months alone, there have been successful military coups in Guinea, Mali, Burkina Faso, Chad and East African Sudan, as well as failed attempts in Niger and Guinea-Bissau. “It's not as if there is a continuous upward trend in all African countries. And the problems that Africa is facing will not be solved in ten years either. It is a long-term and, depending on the country, individual process,” says Scherer. Nevertheless, despite all the setbacks, she sees a fundamentally positive development on the African continent, especially economically.

In order for people in Europe to be aware of this, more diverse reporting is needed that increasingly addresses aspects related to business and innovation, literature or fashion. Veye Tatah also promotes this: “I advocate transporting balanced images of the different countries in Africa into society. You can and should talk about challenges and problems. But normality and everyday life must not be swept under the carpet.”

There is more on the subject in the latest episode of the corporAID Podcasts!