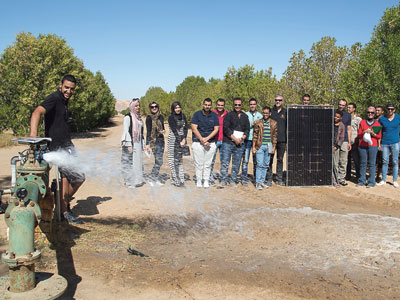 It bubbles! Since September 2017, another pump on the Sekem Farm in the El-Wahat El-Bahariya oasis in the western desert of Egypt, almost 400 kilometers south of Cairo, has been conveying precious water from a depth of 30 meters without a diesel generator crackling in the background. The pump for irrigating more than ten hectares of cultivation area now works with electricity generated by a photovoltaic system with a peak output of 60 kilowatts. The plant was built with technology, know-how and financing from Austria. As a training and demonstration system, it supports the efforts of several Austrian companies to heat up the solar energy market in Egypt.

The project was initiated by the Styrian consulting company Sekem Energy, which works closely with the Sekem Group in Egypt. Sekem founder Ibrahim Abouleish was a shareholder of Sekem Energy, his son Helmy has now succeeded him. Sekem is a social enterprise that operates biodynamic agriculture throughout Egypt, as well as schools, a hospital, a vocational training center and, with Heliopolis University, an academic institution in Cairo, where future leaders face global challenges and explore sustainable solutions for their country. A major subject for engineering students is renewable energy with a focus on solar energy.

Sekem already had two solar panels built with international funding for research: a first 2013 on the roof of Heliopolis University, a second 2015 on Sekem Farm in the aforementioned oasis. In cooperation with Austrian players, Sekem now wants to take a step forward by preparing for its own complete switch to renewable energy in the coming decades and promoting its entry into solar energy throughout the country. "Of course, the photovoltaic technology in Egypt is nothing new," explains Michael Puttinger of Sekem Energy, who heads the project, "the problem is that many systems quickly come to a standstill for lack of proper planning and installation. Mistakes in maintenance and operation then contribute to yours. "Puttinger sees the crux in the inadequate training of engineers and craftsmen, which is why the project starts here. ADA program manager Gottfried Traxler also explains why the Austrian Development Agency ADA supports the project as part of a strategic alliance "with the creation of green jobs through training hand in hand with the offer of an affordable sustainable energy solution in Egypt."

When the project was launched at the end of 2016, the Egyptian Energy Authority was breaking new ground. With power costs skyrocketing ever since the country had to import oil to meet its growing energy needs, 2015 opened up an attractive range of opportunities for private individuals to feed energy into the public grid for the first time. This had spurred the Austrian partners (see box) on their project to bring solar technology to Egypt. However, the regulation was gradually revised and finally withdrawn altogether. On the other hand, solar electricity generation became more and more attractive to bulk buyers as it was foreseeable that electricity tariffs and diesel prices would continue to rise until world trade levels were reached. Solar power was only a matter of time. Therefore, the partners decided to continue the project under changed circumstances and to shift the focus to industry, decentralized settlement construction, tourism and agriculture.

As project leader, Sekem Energy took over the state of solar power technology in Egypt, exploring possibilities of local production of plant components as well as financing models for solar power systems. At the same time Elektro Merl went to the planning of the flagship facility on the Sekem farm. During the installation, technology students from the Heliopolis University gained experience and the commissioning was also used for training the train-the-trainer course set up by the BFI Burgenland. Nearly twenty employees from several universities and delegates from the Ministry of Energy and Housing completed the first course of this kind successfully and can now operate as a certified photovoltaic technician. On the basis of guidelines for installation, operation and safety of solar power plants in Egypt, which was created by the project team, the BFI Burgenland also developed a practical training for electricians as well as apprenticeship as PV plant attendant, which already led to qualifications at the Sekem vocational training center. In addition, Sekem Energy developed a training for students for group tours to photovoltaic systems.

All findings and the state of affairs were presented at a conference on the future of solar technology in Egypt in October 2018 representatives of science, politics and business. Puttinger is particularly pleased that three certified graduates of the photovoltaic course have been hired to build a government megacolpark near Assuan. And that the Egyptian side already has concrete interest in solar projects involving Austrian companies.

THE PARTNERS IN THE PROJECT

The Sekem Energy Under the leadership of Birgit Birnstingl, Graz-based Graz has been developing 2009 energy concepts using renewable and regional resources for regions, communities and businesses. The consulter has already implemented a project for the market introduction of sustainable solar thermal energy in Egypt in cooperation with the Sekem Group and the Austrian Development Agency. Electric Merl in Bruck an der Mur is a traditional electrical engineering company, which operates in the specialized trade as well as in the service. Merl has implemented photovoltaic projects in several African countries. The international department of the Vocational Training Institute BFI Burgenland contributes Austrian expertise to vocational education and training in developing countries. The law firm Sattler & Schanda Lawyers in Vienna has a broad energy law expertise.