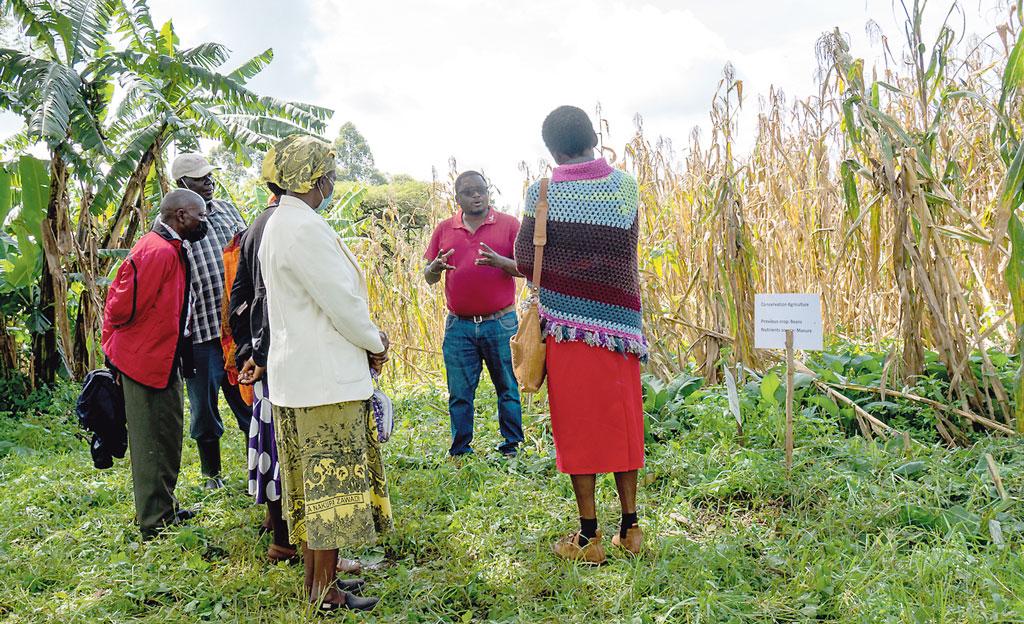 The Dutch Delphy is regarded as top advice for producers of flowers, vegetables and fruit. At the same time, the company is active in research. Questions such as the design of vertical gardens, new applications of data-driven quality management systems or the protein qualities of new types of grain are currently being investigated. Delphy emerged from the privatization of state farm support for Dutch farms in the 1980s and today leads the way for farmers across Europe and beyond. The aim is to improve the sustainable production of flowers or food crops.

Twelve years ago, Delphy set out to gain a foothold in the future African market. There are now small teams in several countries in sub-Saharan Africa. Sometimes they advise individual customers - as in South Africa, where large companies need expertise. Some of them implement market development pilot projects, where possible with financing from private or public donors. “Projects like this help us to gain insight into new environments, to train our employees and to formulate new research questions. Finally, we hope that the aspiring farmers will become good food producers and also develop an awareness that investing in advice pays off in order to keep improving,” emphasizes forestry and agriculture expert Bertken Leede from the Delphy Africa team.

With the ADA in Kenya

In the spring of 2020, Delphy initiated a three-year project in Western Kenya, funded by the Austrian Development Agency ADA is co-financed through an economic partnership. ADA program manager Gottfried Traxler justifies the funding as follows: "Increasing productivity in agriculture is a priority goal for Kenya within its Vision 2030. With its proven know-how, Delphy will support smaller farmers in precisely this."

Manor House Agricultural Center plays a key role in the project as a partner – and hopefully a future customer. The research and training center is located in Kitale, the capital of an agriculturally oriented, poorer district in western Kenya. It was built by Kenyans almost 40 years ago to introduce farmers to modern farming methods. Manor House has relied on organic farming from the very beginning. "Today that may be a matter of course, but Manor House has always worked ecologically even when this was not asked for," says project manager Leede in praise of the facility. For its training and research activities, Manor House has 18 hectares of agricultural land and well-equipped training rooms.

What needs to change to make agriculture in the region more productive? "A lot," says Leede. According to the expert, if you asked the farmers themselves, they would rightly say that climate change is a problem because rain is no longer as predictable as it used to be. They would also say they need cheap access to finance to buy agricultural supplies. They would also indicate a lack of workers, and rightly so, because young people no longer want to do the arduous work of their parents. "But they would never admit," says Leede, "that traditional thought patterns are an obstacle." They could be told a hundred times over that they would make a higher profit if they bought quality seeds - they would rather recycle their seeds as usual or buy them cheap, even if the harvest is getting leaner every year. In addition, there is the problem of fragmentation of agricultural land due to the continued distribution of land among heirs. That makes it difficult to use devices sensibly, says Leede. Furthermore, since farmers grow almost exclusively the staple crop corn and do not follow a good crop rotation, the soil is depleted and pests and diseases can spread more easily.

Manor House wants to break this negative spiral with Delphy's help. In the previous year, the center first of all broke new ground in training by planting two corn fields under the motto of visualization: one in a conventional way, the other in a new way, namely only superficially ploughed, organically fertilized and mixed with beans. Both fields were marked and farmers who came to courses at the Manor House were repeatedly able to see the different thriving. In order to spread the aha effect, this spring Manor House will appoint around twenty so-called lead farmers who are willing to lay out and demonstrate demonstration fields themselves.

The second task is to provide access to credit. The bankruptcy of a microfinance institution that was willing to cooperate meant a setback here. Meanwhile, Manor House is helping the farmers form groups to get credit for another local microfinance provider. Finally, the search for a digital tool in the form of an app is ongoing. This is almost indispensable so that the farmers can document their work, calculate their profits or quickly contact the Manor House experts if problems arise.

For its own development and that of the region, Manor House would like to use Delphy's services over the long term. Just how to pay for it? Project manager Leede sees an income opportunity for the partner in the fact that he takes on a strong role in marketing the harvests of the neighboring farms, which would make sense above all if the farmers ventured into growing vegetables. “There might be a demand for vegetable crates in Kitale and the nearby city of Eldoret,” Leede thinks. Manor House could also collect annual contributions from the farmers it advises. "However, that would be a culture break," fears Leede, because the farmers are used to free advice. The solution to this question is still being worked on.

Delphy is a leading research, consulting and training company for sustainable flower and food crop production. The company, based in Wageningen, Netherlands, has more than 250 employees and has branches in Asia and Africa. The takeover by the Canadian AgriForce in February 2022 will further advance the internationalization.

Here you will find reports on previous business partnerships of the Austrian Development Agency with various partners:

• 250 sofas and more: About the strengthening of a supplier in Kosovo by the object furnisher Foness (corporAID magazine issue 94, winter 2021/22)

• Retrieval of the forest: About a reforestation project in Kosovo by the cellulose fiber company Lenzing (corporAID magazine issue 92, autumn 2021)

• Pasture instead of coal: About the expansion of the biomass market in Serbia by an international consortium led by E3 International (corporAID Magazine Issue 91, Summer 2021)

• Window for innovation about the support of the social entrepreneur promoter Ashoka Austria in the transfer of successful tools to East Africa (corporAID magazine issue 90, spring 2021)

• Can hear! on the establishment of a wide range of hearing health services in Bangladesh and Ivory Coast by hearing implant manufacturer MED-EL (corporAID Magazine Issue 89, Winter 2020)

• Hygiene on the farm about market preparations of the company Calvatis in Brazil (corporAID magazine issue 88, autumn 2020)

• App helps with the number one topic about a Covid-19 consultation for doctors and nurses in developing countries by MedShr (corporAID magazine issue 87, summer 2020)

• Use instead of burning on lobbying for flare gas instead of imported diesel in traffic in Nigeria by ETEFA (corporAID Magazine Issue 86, Spring 2020)

• Professionals forge on the establishment of a training center for technical professions in Kosovo by Hysni Ymeri (corporAID magazine issue 85, early 2020)