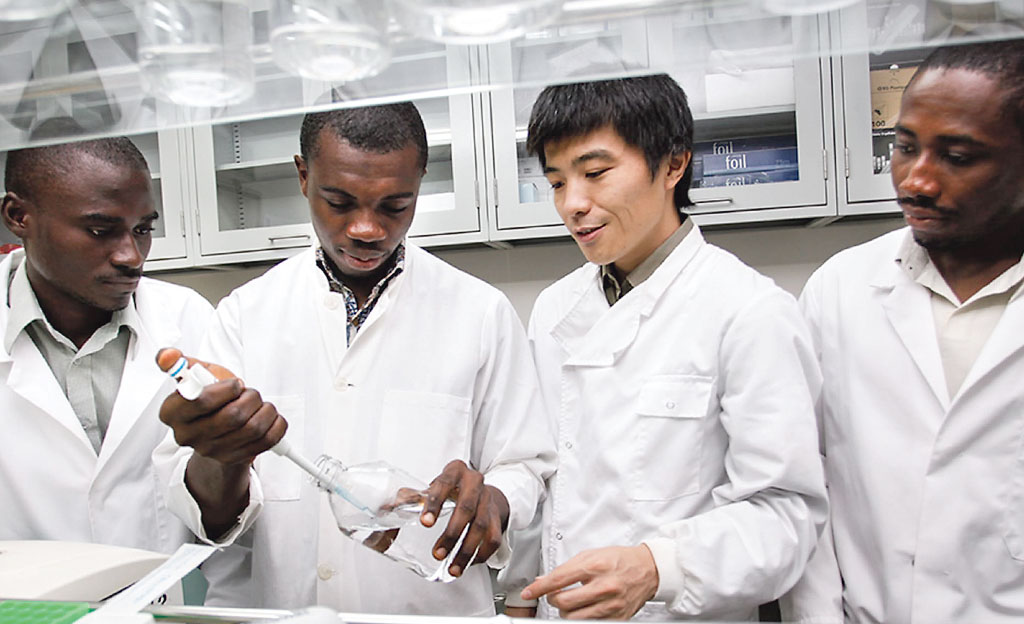 At the end of August, Japan, together with the United Nations, the World Bank and the African Union, is inviting Japanese and African leaders and development experts to a major meeting, this time to Yokohama, to discuss prospects for development cooperation and economic cooperation. The first so-called Tokyo International Conference on Development in Africa TICAD took place at 1993 and was the starting signal for intensified cooperation with the continent. The cooperation is primarily in the form of technology transfer and training, the improvement of the infrastructure, health and agriculture sector in sub-Saharan Africa has been in the foreground so far. With 1,5 billion dollars 2016 flowed about twelve per cent of the Japanese development budget into this region.

Japan has been providing development aid since the 1950 years - not a given in the light of the devastation caused by the Second World War. Today, the island state with a volume of 16,8 billion dollars is the fourth largest donor after the USA, Germany and the United Kingdom. However, based on its gross national income, its development performance, with a share of 0,20 percent, lies only with 20. Location.

Japan has always considered development aid to be an important tool for foreign policy - today, above all, to maintain peace, stability and prosperity - and from the outset was interested in working together with the industrialized countries. 1960 already joined the newly established DAC Development Assistance Committee of the Organization for Co-operation and Development (OECD), whose core concern is the definition of common standards for development cooperation. Japan often causes unrest here. "Japan has certainly always been a special donor: for a long time the only one and today one of the few non-Western members of the DAC," says Stephan Klingebiel of the German Development Institute, describing Japan's special role (see interview).

27th of June 2019
Japan has always gone its own way with its development policy, as Stephan Klingebiel of the German Development Institute declares.

Japan remained loyal to its own "Asian" principles. And among these, the basic law is cooperation on equal terms and the avoidance of donor-recipient relationships. Japan's understanding of assistance as a means of self-help has found its way into the DAC and is still less appreciated for its views on mutual economic benefit and pronounced preference for donations to donations, along with its insistence on aid and on demand Non-interference - all features that characterize South-South cooperations. The primary focus on the neighbors, and not on the poorest among them, is another facet of this logic.

The settlement of the bilateral public aid is transferred to the Japanese Agency for International Cooperation JICA. It manages two-thirds of the state development aid budget. With more than a hundred offices worldwide and 15 in Japan, JICA is one of the largest development agencies. She employs 2.000 employees. Since 2008, it unites the technical and financial bilateral cooperation under one roof and is organized as a one-stop-shop. This will enable them to combine technical cooperation - consulting services provided by Japanese experts and Japanese equipment - and grants in the form of grants, budget support and scholarships on a demand-driven and efficient basis with loans. In addition there are development projects of Japanese NGOs, universities or authorities.

With so-called development loans - loans with low interest rates and long maturities - the JICA governments, for example, enable the construction of roads, water supply or sewerage as well as the financing of engineering services. According to international criticism, which ultimately affected the majority of DAC members, Japan recently came out in favor of relieving at least the poorest developing countries of the obligation to buy equipment from Japan in return for financing. This widespread practice severely restricts recipient countries' room for maneuver and, in reality, means that products and services need to be bought at up to 30 per cent more expensive than equivalent alternatives. This is called bundled financing, as it also offers Austria in the form of soft loans.

Japan was once a pioneer of unbounded aid, but revised its policy with the onset of the national economic crisis 1990. Today, Japan advocates a "more positive view of committed aid" - with the by no means merely superficial argument that "committed aid is more readily understood in donor countries and thus more public money can be made available for it than for unbound".

Japan has a strong counterpart in China, which has supported it vigorously for more than 25 years, today as a competitor in its own primary target region. Japan has also found a way here and made a virtue out of necessity. In order to set itself apart from China, it offers what was always a characteristic of Japanese development cooperation in terms of its own development, namely the promotion of economic infrastructure such as ports, airports, roads, railways and power plants, today under the title "Quality Infrastructure". on. The point is that the construction is not only based on proven top technology from Japan, but also with explicit respect of environmental, labor and safety standards. In addition, unlike China, Japanese companies rely heavily on local staff to implement such projects - creating jobs in partner countries.

With the construction of the good 500 kilometers high-speed line between the Indian metropolises Mumbai and Ahmedabad the advantages of the cooperation with Japan are to be preexercised. With initial costs of more than 15 billion dollars, this biggest development project in Japan to be completed with 2023 is a nod to China, which Japan snatched up a similar project shortly before in Indonesia due to more favorable financing conditions. At the same time, the railway is intended to be an advertising medium for Japan's new geopolitical strategy for a free and open Indo-Pacific region, an alternative program to China's new Silk Road.

Cooperation with the economy

A central task sees the JICA in the promotion of the expansion of the Japanese private sector in developing countries. Support measures include infrastructure investment, training, feasibility study funding, product promotion support, and loans and equity. In a condensed form, such measures have enabled the construction of the Thilawa Special Economic Zone, which 2015 has established as a joint venture of Japanese trading companies and banks, the local government and companies within four years in Myanmar. JICA invested in the Special Economic Zone, awarded loans for the extension of the access road and the port, and provided technical assistance in the form of capacity development for the staff of the central service center. In general, Japanese private companies are invited to submit to various program lines such as the dissemination of Japanese technology, the Global Sustainable Development Goals (SME) or SMEs for financing by the JICA for the move to developing countries.

The Japanese development cooperation is accompanied and encouraged by the JICA Research Center, which is considered one of the best think tanks on development issues. Among the new concepts introduced by Japan, which were also imitated, are so-called triangular cooperations in which one donor supports cooperation between developing countries. However, Japan was also at the forefront of the concept of quantitative goals, contributing to the formulation and, most recently, to the multitude of global UN Sustainable Development Goals. Japan shows leadership on environmental issues and wants to start a debate on new financing mechanisms next. Shortage of funds is forcing it, as Japan's foreign minister said earlier this year. A reduction of Japan's bilateral aid is not to be feared according to experts. This is too much coupled with the economy.