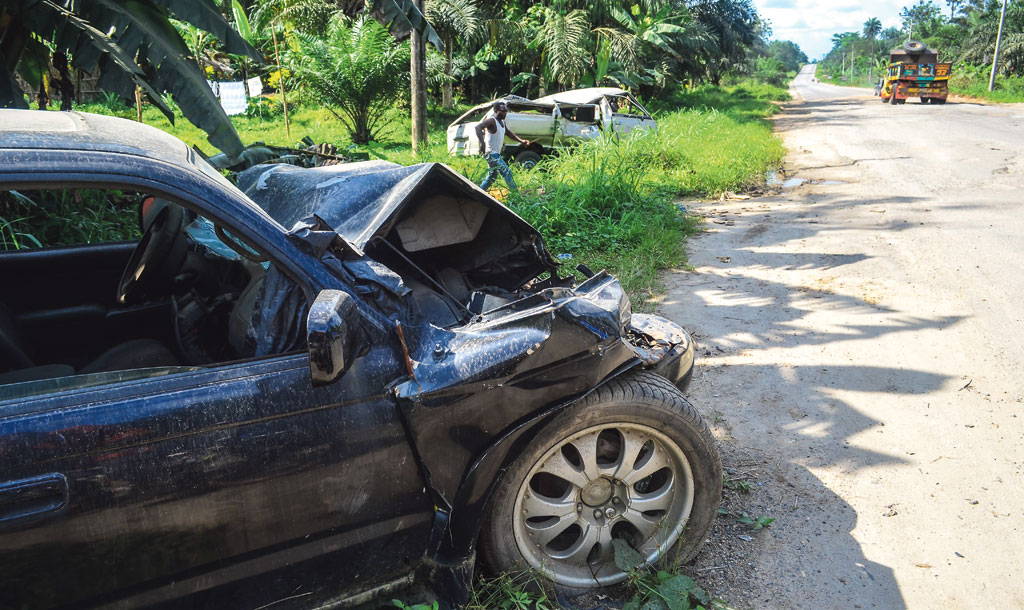 For Blade Nzimade holiday periods have probably lost some of its recreational value since he took on the job as Transport Minister of South Africa for 2018. For after feast days Nzimade takes stock regularly on the traffic accidents that have previously played on the streets of the country. And there are many: Alone in the period 1. December 2018 to 8. January 2019 claimed traffic accidents in South Africa 1.612 human lives. "The streets of our country are a slaughterhouse," Nzimade chooses harsh words, even calling vehicles "killing machines".

Death on the street

In South Africa, 100.000 residents statistically experience 25,9 deaths each year in traffic accidents. This puts the country on the Cape just above the overall African average of 25,2 traffic fatalities per 100.000 inhabitants. On the roads of the EU with 5,5 fatalities per 100.000 inhabitants it travels and walks with the lowest risk in the world.

The poorer a country, the higher the risk of not arriving safely at its destination, according to the World Health Organization WHO's "Global Status Report on Road Safety 2018", which refers to data and estimates for the year 2016 from 175 countries: More than 90 Percent of traffic-related deaths are in low- and middle-income countries, although only 60 percent of all motorized vehicles are on the road. And often it is not even car occupants who lose their lives: Globally, at least every second road death has been on foot, by bike or by motorcycle. Overall, the number of fatalities 2016 was around 1,35 million, plus up to 50 million injured. Compared to 2013 2016 100.000 people died more in traffic. Nevertheless, WHO traffic expert Nhan Tran recognizes even a glimmer of hope in this (see interview): Considering the growing world population and the worldwide increase in cars, trucks and motorcycles, it has "in recent years at least managed to stabilize the number of deaths".

However, in some countries the accident data are as uncertain as the roads: Not all accidents are recorded by the police, national counting of deaths and injuries can differ or, according to Tran, hospitals may record internal bleeding as a cause of death - a traffic accident the cause remains disregarded statistically.

Luca Persia, head of the Research Center for Transport and Logistics at Sapienza University in Rome, also warns against data gaps. "Especially in African countries, there is a serious lack of road safety data." Persia is project leader of the EU initiative Safer Africa, which wants to make African roads safer. In November 2018 presented the initiative therefore the project "African Road Safety Observatory". The purpose of the new observatory is to help African governments reduce the number of road deaths by centralizing the collection, analysis and sharing of reliable traffic accident data and providing a platform for sharing experiences. Persia is convinced: "Reliable data is a prerequisite to understanding the extent of traffic safety issues and taking action."

Many richer countries have already succeeded in improving the accident statistics as a result: national strategies and laws, better vehicle and road design, driving training and - not least - emergency medicine. The number of road deaths since 2010 has fallen by 21 percent across the EU and by as much as 28 percent in Austria. Even in the 1970 years, 2.440 people crashed on their homes every year - 2018 was 400. By contrast, no low-income country has been able to reduce the number of road deaths in recent years.

An ambitious goal is thus moving into the distance: 2015 has agreed on the United Nations' global goals for sustainable development. One aims to "halve the worldwide death toll and injury from traffic accidents by as much as 2020". However, when 2020 invites the Swedish government to the high-level Global Ministerial Conference on Road Safety in February, it is unlikely that the goal will be achieved, but a new agenda and new goals will have to be decided.

According to WHO estimates, around 300.000 people die on India's roads every year. In Mumbai, however, there is a positive trend: the number of road deaths fell from 611 in 2015 to 475 in 2018. With the help of international experts, the city has made some changes - for example, the high-risk junction "HP Junction", which is operated daily by 70.000 vehicles and 50.000 passers-by is used. New sidewalks, traffic islands and narrow lanes ensure pedestrian safety. According to initial analyzes, the flow of traffic has even improved as a result of the structural measures. Mumbai is now planning to redesign twelve more risk crossings.

Road safety is not just about preventing personal tragedies; death or long-term disability primarily affects the working-age population. According to the 2018 World Bank Report, "The High Toll of Traffic Injuries: Unacceptable and Preventable," the death of a working family member through death or serious injury can plunge families into poverty and affect overall economic growth. Based on data from 130 countries, study authors estimate that an average reduction in road traffic deaths by only 10 percent will increase real GDP per capita by 24 percent over a period of 3,6 years. Political decision makers are therefore well advised to prioritize traffic safety.

That's what the 6 wants. May 2019 draw attention to the launching of the UN Road Safety Week, which this year stands under the slogan "Leadership for Road Safety". Public health expert Kelly Larson has a lot to say about this motto: "We know how to save lives. But we urgently need governments that prioritize road safety as a public health issue. "Larson works for Bloomberg Philanthropies" by American entrepreneur and politician Michael Bloomberg. The charity organization has been investing around 2007 million dollars in road safety worldwide since its 260 Global Road Safety Initiative. Bloomberg works closely with ten cities in Asia, Africa and Latin America and advises mayors, city planners, policemen and other traffic regulators - not just because cities now have the majority of the world's population, but also in the hope that successes in a city become nationwide Could inspire the introduction of measures.

Lobbying for legislative changes also counts the initiative as one of its tasks. Adequate laws are not always state-of-the-art: According to the WHO, there is a seatbelt requirement in 105 countries, but only 45 countries have strict laws against drunk driving and only 46 countries are calling for generally recommended speed limits. Child safety systems are mandatory in just 33 countries, and only 49 countries have adequate helmet laws. Even the safety of the vehicles themselves - such as front and side impact protection, electronic stability control or seat belt anchoring rules - is comprehensively claimed only in 40, and here especially by richer countries.

That, as Larson says, "traffic laws and law enforcement are the basis for achieving road safety" is obvious. But in the implementation then often show that the crux lies in the detail: So the control of speeding is often difficult: "Especially in poorer countries, where there are hardly any radar devices for speed detection, the police can only enforce speed limits."

And even if the introduction of helmet duty in Vietnam 2007 had been a great success, the issue is still not done: "Until then, only about 40 percent of motorcycle riders wearing helmets, today there are already more than 90 percent. But many helmets are inferior in quality or are put on but not closed, "says Larson.

Thousands of children in Africa die on the way to school every year. Sarsai, a traffic safety project of the NGO Amend, is taking action and won the Ross Prize for urban transformation, endowed with 2019 dollars, in April 250.000. The NGO works with schools in the poorest urban areas, analyzes dangers and implements structural measures to secure the way to school. There are also training courses for children and teachers. The project started in Tanzania and is now running in nine countries. It is estimated that it protects around 500 children from minor to fatal injuries each year.

Incidentally, the focus on motorcyclists does not only seem worthwhile in Vietnam: small, inexpensive motorcycles and scooters are now shaping the streetscape in Southeast Asia and in many other developing regions. According to MotorCyclesData, 2018 alone has been sold worldwide to the 62 million motorcycles. Most of them went to owners in Asia and South America who commute to their jobs on the two wheels, deliver food, transport goods and people. But fast and cheap mobility has its price: Motorcyclists are particularly noticeable in the accident statistics - and emergency rooms - of many developing regions.

For example, in the Brazilian coastal town of Fortaleza. When Roberto Cláudio became city mayor in 2013 year, he decided to make Fortaleza the "avant-garde of traffic safety" (see info box). During visits to the city hospitals, he noticed that most of the injured corresponded to a description: male, between 18 and 30 years old, on a motorcycle and without a helmet. More than half of the deaths were also in this group. Therefore, he launched a tailored to young men multimedia campaign for helmet use and reinforced police controls. Finally, along with many other measures, Fortaleza managed to reduce the number of deaths by one third in just four years.

The coastal city of Fortaleza with its 2,6 million inhabitants has long been considered Brazil's hotspot for traffic jams and accidents. The mayor elected in 2013, Roberto Cláudio, put traffic at the top of his agenda and initiated numerous measures for safe, pedestrian and cyclist-friendly road traffic. These include awareness-raising campaigns, speed limits, police checks, narrowing lanes, dedicated lanes for buses and bicycles, raised zebra crossings and the redesign of unsafe intersections. The statistics confirm Cláudio's path: The number of road fatalities fell from 2014 to 2017 per 14,66 inhabitants in the period 9,71 to 100.000.

For safer roads, traffic experts have many suggestions: they redesign dangerous intersections, engage in emotional campaigns and recommend mass transportation to reduce more dangerous individual traffic. WHO expert Tran immediately advocates a paradigm shift. "There are many sensible measures," he says, "but it can not be 'that we repair ex-post, which was previously misconceived." He wishes that safety is always thought of as in the aviation industry. "Governments must begin to integrate security in all relevant decisions in advance." A way of thinking that would probably be recommended to many road users.