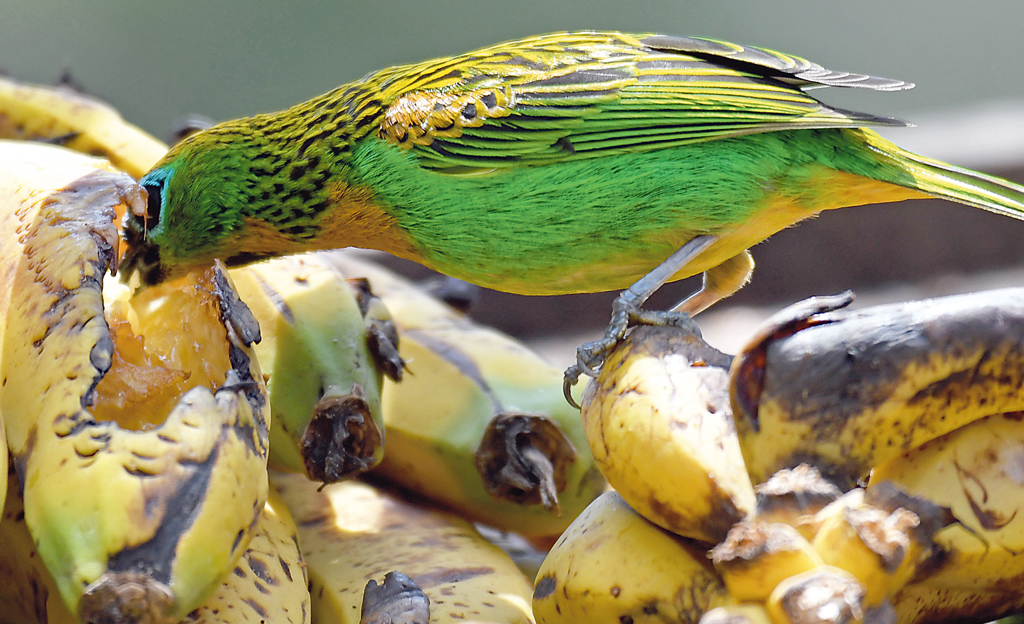 In India, as is well known, cows are very much admired. This spring, at the beginning of the corona crisis, some of them were particularly spoiled: Indian farmers fed their animals with strawberries, broccoli and salads, which they could not sell due to the lockdown.

The pandemic caught the food industry all over the world cold: In a short time, established supply chains to restaurants, hotels, catering companies, school and office canteens collapsed. International transport routes were restricted, harvest workers could not come. Some producers managed to divert their perishable goods quickly to retailers or to sell them through direct sales, some were given away to the needy - and yet the industry also reported reports of rotting crops in fields and the disposal of large quantities of milk, eggs or vegetables.

Never on the plate

How high the food losses caused by the crisis actually are can only be speculated about. "There are no numbers on the global impact and I doubt we will ever have any," said Daniel Gustafson, Vice-Secretary-General of the United Nations Food and Agriculture Organization FAO in a recent webinar on the Covid-19 crisis and food waste ". Because even in quieter times, food that is produced but never ends up on a plate is difficult to calculate. Only a few countries provide reliable data on this. The FAO therefore roughly estimates that around a third of all food production is not consumed annually, the World Resources Institute estimates the associated economic loss at $ 940 billion.

The “International Day of Awareness of Food Loss and Waste”, which the United Nations is organizing on September 29, 2020 for the first time, would like to draw attention to this inefficiency in the global food systems, sometimes referred to as the “silent crisis”.

Five years ago, the international community committed itself to the goal of halving global food waste per capita and reducing food losses by 2030. But what is the difference between waste and loss? One, waste, tends to be described as a phenomenon in rather rich countries: it is about food waste that occurs at the retail and consumer level: in supermarkets, in restaurants, in private households. And it is increasingly being discussed. This is ensured, for example, by surveys such as that of the University of Natural Resources and Life Sciences, according to which up to 133 kilos of edible food, especially bread and pastries, fruit and vegetables, dairy products and eggs, end up in the dung in every household. Impulsive buying decisions in the supermarket, ignorance of how to handle food and a certain throw-away mentality are likely to promote this development.

On the other hand, there is less talk about the waste that occurs at the beginning of the supply chain, from harvesting, slaughtering or catching to the retail level: For example, when fruit, fish, milk or grain is thrown away, spilled, incinerated or otherwise disposed of, even before they go on sale. This affects not only, but often, small-scale agriculture in developing regions. The FAO calculates that 14 percent of the economic value of all food produced is lost in the early stages, with losses occurring very unevenly. At the regional level, estimates range from five to six percent of total crops in Australia and New Zealand, and as much as 21 percent in Central and South Asia.

For reasons of food security and ecological sustainability, experts see an urgent need for action. On the one hand, a growing world population must be adequately supplied with food. The University of Washington predicts that the earth will be home to around 2064 billion people by 9,7, around two billion more than today. The pressure to get enough food on your plate, especially in the growth regions of Africa or Asia, will therefore increase rather than decrease. On the other hand, with unused food, resources such as water, soil, seeds, fertilizers, animal feed and working hours are also lost. And as far as greenhouse gas emissions are concerned, the FAO expects CO from food losses alone2-Equivalent of about 1,5 gigatons. Advances in this area would bring the world closer to the Paris Agreement goal of keeping global warming below two degrees Celsius. "Wasting food means wasting scarce natural resources, exacerbating climate change and missing out on the chance to feed a growing population," summarized FAO chief Qu Dongyu.

The loss rates are particularly high for roots, tubers and oil plants, as well as for fruit and vegetables. And there are many reasons for that. If, for example, harvested at the wrong time or simply incorrectly harvested, the fruit and vegetables can be too unripe, overripe or damaged. If goods are stored incorrectly, not adequately cooled or dried or protected from pests, they also lose value. And if a farmer does not make it to the market despite high quality goods, he is left with it. A study by the Rockefeller Foundation assumes that in sub-Saharan Africa, for example, 50 percent of fruit and vegetables, 40 percent of roots and tubers and 20 percent of grain are lost after harvest.

The good news: There is also inexpensive help for a number of problems. Lisa Kitinoja, expert on international agriculture (see interview) has been teaching smallholders how to treat their crops carefully or how to extend the shelf life of food for three decades. In her book “100 Under $ 100” she has collected a hundred inexpensive tools that can make a big difference in everyday farming life.

And a number of start-ups are also taking up the topic, as two examples from Africa show: The Nigerian agronomist Nnaemeka Ikegwuonuuu is devoting himself to the major problem of the lack of cooling facilities for most farmers: “In Nigeria we lose 45 percent of the vegetables harvested and one Third of the fruit because it spoils quickly when heated, ”he explains. Ikegwuonuuu developed "ColdHubs": These are walk-in, solar-powered refrigerated containers that are set up right next to farmers and on marketplaces. If you want to store your goods, you pay around 50 cents per day and box. The award-winning start-up operates around 50 ColdHubs in the country and is constantly expanding its range. The Ghanaian Isaac Sesi from Sesi Technologies has also developed a helpful solution: farmers can use a device called “Grain Mate” to determine the moisture content of their grain. You will then know whether further drying is necessary before storage or sale, can avoid fungal growth on your goods and thus significantly reduce your losses.

Such solutions are important but only small pieces of a large and complex puzzle. Many elements are necessary for the more efficient use of the global food supply: From farmers' access to training, investments in supply chains and market access to cooperation between smallholders and international food producers.

For experts from the FAO, the World Bank and the World Resources Institute, the creation of a political framework is the top priority: They recently demanded a prominent place for the topic on the political agenda in a webinar and hope that the Covid-19 crisis will be included Catalyst works. “Countries need to prioritize food loss and waste,” says Geeta Sethi, Global Lead for Food Systems at the World Bank. In their opinion, a promising approach is to explicitly include the topic in national climate protection goals. “Every country must have a strategy for achieving the Paris Climate Agreement. Agriculture is usually just a footnote in this. But a business-as-usual approach does not change agriculture, it remains emission-intensive. We must therefore also strive for climate protection by reducing food losses and waste, ”said Sethi.

To help, the FAO launched a platform in July that presents successful models for reducing food waste, offers e-learning courses and is working on improving the data situation. Some poorer countries are already developing national strategies. The World Bank and FAO are currently setting up multi-stakeholder programs together with six African countries to identify hotspots in supply chains where particularly high losses occur. The exchange between governments and companies should result in innovative and workable solutions. "You have to look at every raw material and every cold chain individually," says Hans Hoogeveen from the FAO, "because changes only happen where they are very specific."

Food losses can be significantly reduced through a variety of interventions. A small selection: 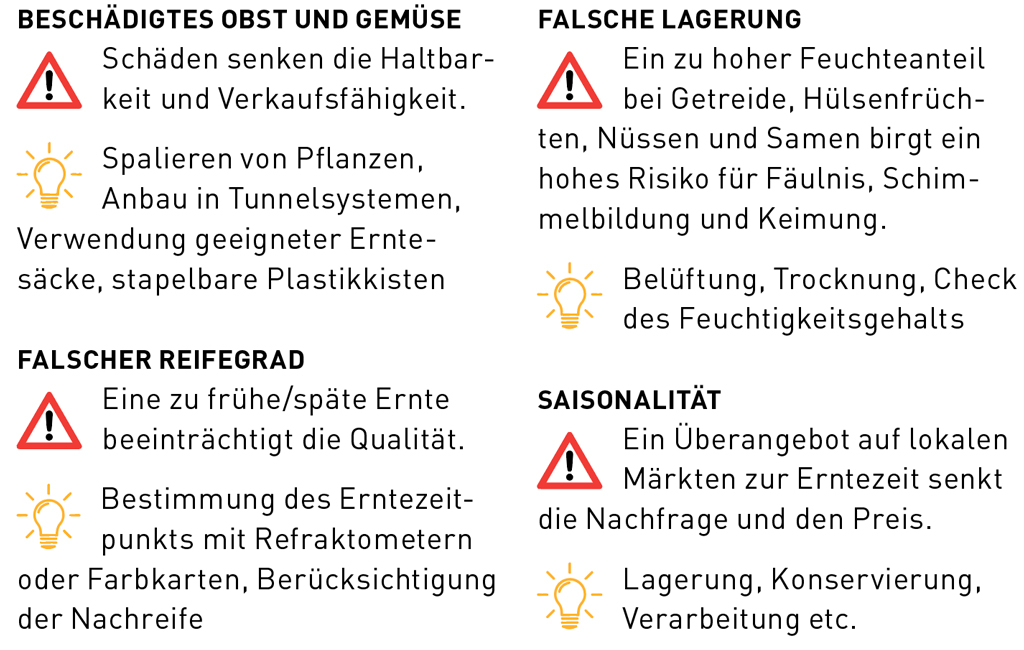