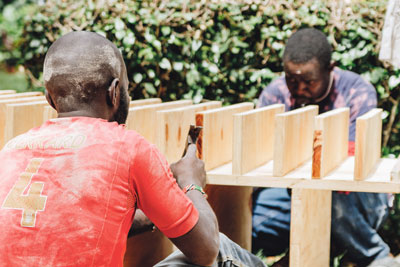 Innovation and Africa are increasingly mentioned in the same breath, but how does the new spirit of innovation in the neighboring continent actually affect Austrian companies? Martin Treml, Regional Director for Africa at the healthcare provider Vamed, which is active in 18 African countries, smiles: "In Senegal we have started an innovation project in medical care and strive for knowledge transfer. However, we have to do three times as many trainings as planned, because the first two clients are self-employed with the new knowledge and are suddenly our competitors. This is not necessarily optimal for us, but it is for development and growth. "

Such forms of spillover effects are worth gold for the development on the African continent, in which Treml and six other experts agreed on a corporAID Multilogue At the end of November discussed Africa's path towards prosperity.

While in cities like Nairobi or Lagos a start-up is founded after the next one, and entire steps in development - such as the landline phone - are simply skipped, in many places livelihoods such as water, electricity, roads, health care are lacking. Can digital transformation drive the whole continent forward, or should the focus be more on "classic" industrialization? How can industrialization and digitization come into balance so that Africa finds the best possible development path?

Actually, Africa is not developing so much differently from Europe or the US, it's just in a different phase of development, says Efosa Ojomo (see also guest commentary). The researcher from the US-based Clayton Christensen Institute points to the development of South Korea, which has successfully made its way out of poverty into prosperity since the 1950s, and emphasizes that he believes that many African countries can do just as well.

Only digital is not enough

Christopher Maclay works like many others on it. The Briton is the head of growth of Kenyan start-ups Lynk Kenya, who provides a digital mediation platform for the informal sector of Kenya and calls himself "LinkedIn for the LinkedOut". For Maclay, everything started with a pipe burst in his apartment in Nairobi and the subsequent search for an installer. The first person he contacted came seven hours later, did poor work, and demanded a disproportionate salary.

The day after, the problem was still not resolved, but then Maclay reached an installer named Julius, who stood fast on the mat, solved the problem and priced a fair price. Maclay's thought was simple: Julius should get the chance for much more orders - and the consumer a good, reliable installer. Meanwhile, Lynk Kenya has already brokered 22.000 jobs, not just plumbers, but also carpenters, drivers, hairdressers and cooks, earning two million dollars, with a significant upward trend: "We're just getting started," says Maclay, in a great start. up-style.

In sub-Saharan Africa, 80 percent of people work in the informal sector, this is where Maclay starts: "Before I came to Kenya, I lived in Liberia. Within a few years, two studies on unemployment were published in Liberia. According to the World Bank, 85 percent of Liberians were unemployed, according to the other study, it was seven percent. The question is: what is work? I prefer to involve the informal sector because it excludes a lot fewer people. "Maclay's start-up wants to build trust by creating a special entrepreneurial infrastructure for the informal sector.

To get them started, their own business concepts had to be overturned several times. "At first, we thought we were delivering the technology and the rest was working by itself. But far from it. We realized that it's our role to quietly poll any vendor offline and do background checks. The digitization in Africa requires strong analog interventions, "says Maclay and refers to about the controversial in this country carrier Uber, who enjoys not only a much better reputation in Kenya, but also trained each driver in the same way at the wheel.

According to Maclay, the new technology providers must always look for ways to profit from the success of the competition. Lynk Kenya itself would not exist without the mobile payment service provider M-Pesa. "The most important innovations are always linked to important fields of action. It's not about any advertising apps, but about education, health, work. And as great as the tech innovations are, Africa also needs classic industrialization, education and health programs. All of this has to work hand in hand, otherwise nothing will work, "says Maclay.

Last year, just under 130 new technology hubs were opened in Africa and 560 million dollar venture capital for start-ups acquired, a third more than last year. On the 14. and 15. December hosted the re: publica, Europe's largest digitization conference, its first edition of Africa in the Ghanaian capital Accra. The aim was to strengthen the digital exchange between Africa and Europe and also to explore the possibilities of digitalisation for development cooperation. In particular, the rapid expansion of mobile telephony in Africa - even in the lowest-income fifth, two-thirds of people have access to a mobile phone - is often highlighted as a major digital development opportunity in this context. The fact that more people have access to a mobile phone than to a clean toilet is not only due to the rapid spread of mobile phones, but also to the poor hygiene situation. And to be able to use mobile payment systems in the best possible way, the mobile phone does not help much if there is no money to transfer.

Jesus Crespo-Cuaresma, director of economics at the Vienna University of Economics and Business Administration, describes digitization in Africa in this context as a catalyst for development, but not as a source. This is the industrialization. In order to promote development, however, the political institutions should at least function in such a way that they can guarantee legal security for companies.

Do not reinvent the wheel

20. December 2018
Judith Helfmann-Hundack heads the Department of Foreign Trade and Development Policy at the Afrika-Verein der Deutschen Wirtschaft and acts as an EZ-Scout for the German government. She recommends a stronger focus on classic ...

Hans Stoisser, founder of the Ecotec consulting firm specializing in Africa, points out that there can be no question of either being or not talking anyway, since industrialization in Africa is already in its infancy - driven by Chinese companies. While some sniff it, others in China see Africa as an engine of industrialization, such as McKinsey expert Irene Yuan Sun, who pointed to corporAID (see issue no. 75)that there are no short cuts on the path to prosperity: this leads from the manufacturing industry to the service economy. European companies could help Africa along this path.

Judith Helfmann-Hundack (see also interview) The Afrika-Verein der Deutschen Wirtschaft states quite soberly that given the lack of activity of European companies in Africa, we would not have to wonder about the Chinese dominance there. However, in her opinion, the African market has not changed as much in recent years as has sometimes been postulated. It was our view of Africa that has changed and strengthened.

Nella Hengstler can only agree with that. She was the business delegate for seven years Außenwirtschaft Austria in Lagos, Nigeria, before assuming the post of regional manager for Africa / Middle East at headquarters in Vienna in August this year. "When I started in Lagos, I often heard the question from local entrepreneurs: Are you the brave young woman who is now in Africa? I do not hear that anymore. The image of Africa is changing slowly, companies are much more informed. "However, this awareness gain does not automatically go hand in hand with a real business rush to Africa.

Nevertheless, the current focus on the rapid digitization in Africa should not be underestimated: "The digital innovations show us a positive story that interests people here as well. In Austria, you can still surprise people by telling them that you are ordering your food in Lagos via app. "At the same time, Austria is sometimes a few steps ahead of digitization in Austria. "I recently talked to a taxi driver in Vienna who said it was not so easy for him to get to a point-of-sale card terminal so that customers could pay by credit card. In Lagos, anyone who weaves basket chairs under the bridge has such a device. Especially in the fintech sector, a lot has happened in Africa in recent years. "

Before her station in Lagos was Hengstler for the Außenwirtschaft Austria active in New Delhi, she looks back in retrospect, some evidence that Efosa Ojomos thesis of the different development phases underpin: "When I was from 2002 to 2005 in India, nobody in Austria has been interested in the country. That was the superexotic post. There you go to do yoga and to look at the Taj Mahal. Five years later, India was the boom country, as an export-oriented company you look at India today. Maybe Africa, and especially Nigeria, is right at this point, saying: It's the next big thing. "