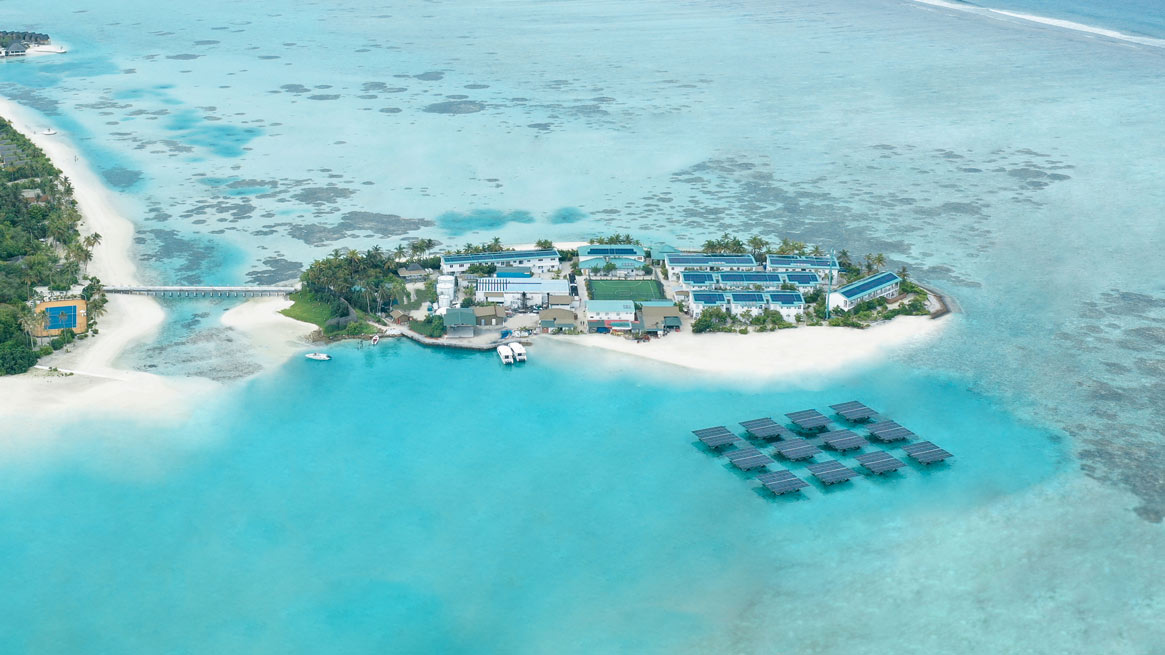 Countless islands with hundreds of kilometers of sandy beaches, crystal clear water, gentle waves: the Maldives are a paradise for tourists. However, upon closer inspection and listening, the pristine picture is thwarted by crackling noises. The islands are too small and the distances from one to the next too long to operate a viable power grid with underwater cables. Therefore, diesel generators form the backbone of power supply in everything from schools to hotel resorts.

Martin Putschek has this with his company swimsol firmly in sight for more than a decade now. Swimsol is a solar energy company specializing in tropical coastal regions, most notably the Maldives. “There are now 200 hotels in the Maldives that each require one to two megawatts of electricity, primarily for air conditioning. That corresponds to the needs of several thousand households in Austria,” explains Putschek.

So far, the Swimsol solar systems have primarily been given a place on the Maldivian hotel roofs. However, since both the roof and, in principle, the land area on the small islands is scarce, it is now - in accordance with the founding idea of ​​Swimsol - going more and more out to sea: with floating photovoltaic systems that bear the name Solar Sea. The systems are so robust that they are not restricted in their functionality by the waves, which reach a maximum of two meters high thanks to the protective reefs in the coastal area, or by the high salt content of the water. On the contrary: due to the cooling effect and the light reflection of the seawater, they are up to ten percent more powerful than their counterparts on the roofs.

“The Maldives doesn't have enough wind or big waves, so tidal or wind energy doesn't work there. The renewable energy of choice is solar energy. Since there is both a lot of sun and a lot of sea available there, we simply combine both,” says Putschek. Solar energy in the Maldives has been cheaper than electricity from imported diesel for years, even without subsidies. Putschek: "We don't have to give anyone anything, we simply replace expensive diesel power with cheaper solar power."

Today Swimsol employs 55 people, 35 in Vienna and 20 in the Maldives. And 20 Maldivian hotels are already being supplied with electricity. The systems, which measure an average of 200 by 200 meters and have a peak output of two megawatts, will remain the property of Swimsol. “The hotels are still reluctant to invest three to five million euros in a large floating solar system and battery. This would pay for itself within a maximum of ten years,” says Putschek. Swimsol is currently only selling the electricity generated as part of power purchase agreements - and links the price to the diesel electricity price in such a way that solar power is always cheaper.

It all started rather by accident. In 2009, Putschek, who was still working for a German solar company at the time, expanded a business trip to Pakistan and Sri Lanka to include a two-day trip to the Maldives. There he saw a country that spends around 20 percent of GDP on importing diesel and whose coasts have calm waves. "Then the idea came to me: Why isn't anyone building solar systems in the water?" Putschek remembers.

The first prototype swam in the paddling pool, then in different pools of the hydraulic engineering laboratory of the Technical University of Vienna. Finally, the inventors around the physicist Putschek moved it to the almost 200-meter-long tank of the Shipbuilding Research Institute in Vienna-Brigittenau. “Normally, the stability of seagoing ships is tested here with different wave patterns. We were also allowed to test our models here,” says Putschek. In 2014, the first floating solar system specifically designed for salt water and moderate waves was installed in front of the beach of a large resort in the Maldives.

Even the most experienced technicians experience surprises again and again: "We did not expect that weak currents would stimulate coral growth and that corals would then cut through one cable after the other at our pilot plant," reports Putschek - today Swimsol uses specially armored cables.

Swimsol: Directly connected to the Maldives

At first, sales didn't make big leaps. Although most of the hotel managers showed a general interest, they first wanted to see how the concept held up against the competition. "Only after we had completed the second project did the whole thing pick up speed," says Putschek.

But although the entrepreneur can now refer to a number of systems that have been installed, he still expects a lead time of around two years for each project. Also because the hotel managers are often not in the Maldives, but in Singapore, India or Thailand. If an order is placed, Swimsol procures the photovoltaic modules from China, the other components come from Austria, Germany and Hungary.

The system is then configured at the company's location in Putschek's hometown of Klosterneuburg before it is sent to the Maldives by cargo ship and put into operation there by a Swimsol team.

The experts can access the systems at any time from the Swimsol control center in the fourth district of Vienna. There is a relaxed atmosphere in the nested old building, and the optimistic start-up spirit does not seem to be dampened by the loss of sales caused by the corona virus. "Of course, Corona hit the tourism industry hard - and many hotels initially had other things to do than take care of new solar systems," says Putschek. However, Swimsol benefited from the fact that more than a third of the employees live in the Maldives and were able to continue working on the projects that had already been commissioned even in times of travel restrictions. In the meantime, the measures have been relaxed in the Maldives, and business initiation is picking up speed again for Swimsol.

Swimsol: The development bank on board

However, the greatest threat to the island state in the Indian Ocean is not the virus, but rising sea levels. In many places, the “sinking of the Maldives”, the lowest-lying country on earth, is already being prophesied. And Putschek also knows from his own experience: "Sometimes a beach that was there last year is simply gone."

Ex-President Mohamed Nasheed pointed out this existential danger for his home country a few years ago with a high-profile underwater meeting of his government. Nasheed and his ministers met in diving suits and signed their climate protection appeal with waterproof pens. What seems bizarre underlines the real danger: A rise in sea levels of less than half a meter would make the archipelago uninhabitable.

But even if Swimsol does not slow down the rise in sea level, Putschek wants to make advance payments with its sustainable power generation. He receives support from the Austrian Development Bank OeEB. OeEB finances projects that are economically viable and make sense in terms of development policy, with a focus on renewable energy projects in developing countries.

At the end of the previous year, it was granted to Swimsol in cooperation with the Swiss Impact Investor responsAbility a $14 million syndicated loan. OeEB board member Sabine Gaber emphasizes that "improving access to clean, reliable energy that enables economic development while protecting our climate" is a key challenge and is "proud to support Swimsol in expanding this innovative clean energy solution". For Swimsol, the OeEB loan means an enormous boost in expansion. “The bank finances 65 percent of the investments, and we raise the remaining 35 percent from equity. Altogether that makes around 20 million dollars - we can use it to generate more than ten megawatts of electricity," says Putschek happily.

Putschek's vision is to halve the diesel required for power generation in the Maldives in ten years - this currently amounts to 400 to 500 million liters a year. “To do this, we have to install 500 megawatts. For the next five years we are aiming for 100 megawatts - 20 percent of all hotels in the Maldives should be supplied by one of our systems," says Putschek. After that, the leap into other tropical island regions, which have similar conditions to the Maldives, is to be ventured - the first systems have already been installed in Malaysia, and Indonesia and the Seychelles are at the top of the list.

The rapid scaling should be made possible by significantly cheaper batteries in order to store the solar power generated during the day for the night. Putschek expects that in five years it will be possible to store a kilowatt hour for two cents - the current price is ten cents, i.e. five times as much.

In addition, the company should benefit from the increased international efforts to protect the climate. The first resorts are recognizing the marketing benefits of clean energy supply and are competing to see which hotel generates the most solar power. In the long term, Swimsol could also increase the price of CO2- Playing into the hands of emissions: "If coal-fired power is becoming more and more expensive, but photovoltaic systems are continuously becoming cheaper, solar power will have lower generation costs than conventional power in the near future. Then we can go to Jakarta or Bangkok – and then we'll no longer be talking about megawatts, but about gigawatts," predicts Putschek. Such mind games are not yet in the business plan.

Immediately following the meeting in February, Martin Putschek was due to travel to the Seychelles. A business trip, of course – because Putschek prefers to vacation in the mountains.

Martin Putschek founded Swimsol in 2011 as a research start-up. In cooperation with the Technical University of Vienna and the Fraunhofer Institute, he developed the first solar system to float on sea water. Shortly thereafter, Putschek brought his brother Wolfgang, formerly on the board of an investment bank, into the management of the company as CFO. Today, Swimsol employs 55 people - 35 in Austria who are responsible for planning the solar systems and project management, and 20 in the Maldives who are responsible for installation, maintenance and electrics. In the previous year, the turnover (due to corona) was five million euros, this year it should be almost eight and in 2023 more than ten million euros.