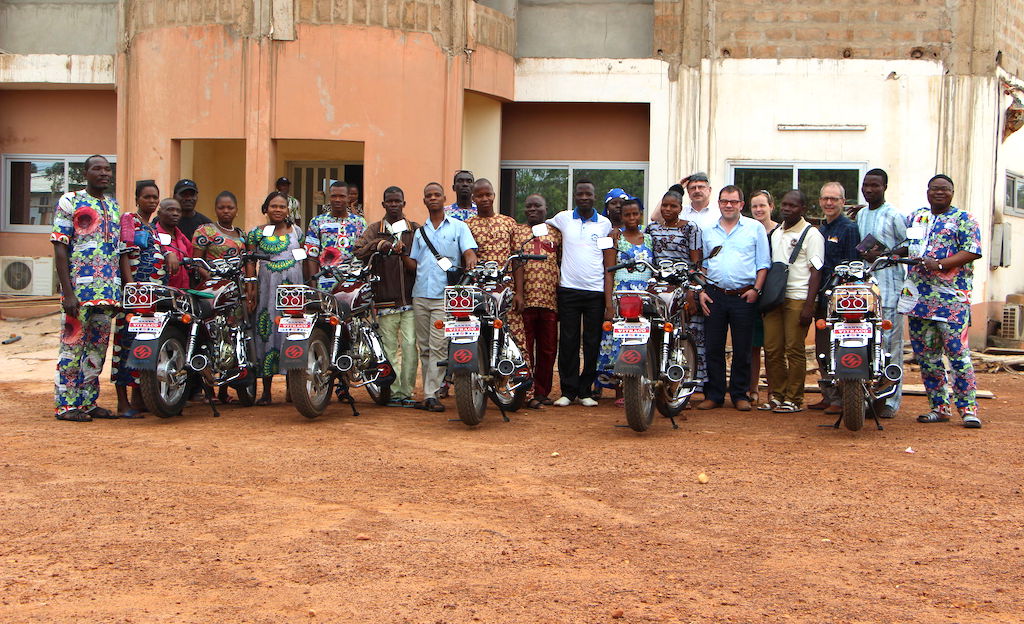 A trip to East Africa marks the beginning of a long-distance relationship that has existed for more than 35 years: in the early 1980s, the family of the Salzburg painter Wilhelm Kaufmann traveled to Tanzania and got to know the city of Singida. Back in Austria, the Kaufmanns began to initiate first aid projects for Singida. In 1984 the private commitment finally became an official partnership between the city of Salzburg and the East African city of 200.000.

A lot has been achieved since then, say Andrea Rainer and Judith Schröcksnadel from the Salzburg-Singida city partnership, including the improvement of the drinking water network, the construction of a rainwater reservoir and the establishment of the “Upendo” orphanage. Since the 1990s, the association has also been promoting educational and health projects as well as village development around Singida. In 2018, the association had 145.000 euros available for the activities in East Africa - around two thirds came from the city and state of Salzburg.

Town twinning became popular as a peace measure especially after the Second World War. At first they emerged mainly between French and German cities, later the idea was copied across Europe. Austrian cities also cultivate urban friendships, says Thomas Prorok from the KDZ - Center for Administrative Research in Vienna. "There are thousands of municipal partnerships in Austria," estimates Prorok, but there is no data on their number or type. The majority is between European counterparts. Sometimes, however, there are also more exotic relationships: Leibnitz has a friendship between cities with Pedra Badejo on Cape Verde, Linz is partnered with San Carlos (Nicaragua), Klagenfurt with Nanning (China) and Dushanbe (Tajikistan) or St. Pölten with Wuhan (China) .

"Vienna is constantly receiving partnership applications at the city or district level," says Madeleine Salinger of the Municipal Department for Europe and International Affairs. There are close cooperations with many cities, even if the federal capital does not run city partnerships in the classical sense. "The focus is on topics from which both sides can benefit - in the case of our cooperation with the Chinese city of Chengdu, it is innovative urban development and smart city initiatives, business, tourism and culture." Call for proposals NGO for projects in the fields of education, health and gender equality. In addition, Vienna provides humanitarian aid in Ukraine and Moldova through the sale of used medical equipment and furniture.

A focus on development policy is rarely found in Austrian town friendships, Prorok explains. "It's mostly about sporting and cultural exchange." And if development cooperation takes place at the local level, then it's "the work of committed individuals," says Thomas Weninger. General Secretary of the Austrian Association of Cities, the municipal interest representation of 255 domestic cities.

In other countries, cities are much more active in development aid. Decentralized cooperation mainly takes place between cities of countries that "share a common colonial past, including linguistic ties," says Marlène Siméon, director of the Platforma initiative. Platforma, an association of European municipalities and municipal associations, has been committed to decentralized cooperation since its founding ten years ago. One is convinced, so Siméon, that cities can do a lot as development partners. "Sustainable partnerships provide many approaches that address local and regional skills: waste management, wastewater, culture, public services, or the development of the business environment." She also sees the advantage of cities working close to the citizen, including engaging citizens, associations, or migrant organizations are.

For Eva Dick of the German Development Institute, there is a strength of urban cooperation "in dialogue at eye level and solutions to problems that are familiar to both partners" (see interview). In many projects, employees from municipalities work together to strengthen local government or public services. An example of success is the Belgian town of Roeselare, which has been friends with Dogbo in Benin since 2010. Together, employees from both cities have reintroduced the birth registration Dogbos. Due to the success and the role model effect, they received the first "Platforma Award" for this.

Learn from each other

28. February 2019
Eva Dick is researching the topic of "City in Development Cooperation" at the German Development Institute in Bonn and reports on local development cooperation, especially from a German perspective.

In Germany, too, an award ceremony aims to inspire local cooperation: Last December, the German Sustainability Award was presented for the first time in the "Municipal Partnerships" category: Hoi An in Vietnam and Wernigerode in Saxony-Anhalt won. The couple has had a lively exchange of information on culture, education, environmental protection, tourism and vocational training since 2013. For example, there is a project to train skilled workers in the hotel and catering industry. Together, they developed an action program on climate protection and adaptation to climate change with a focus on renewable energy and waste disposal.

Hoi An and Wernigerode had help building relationships. The Service Agency Communities in the One World SKEW advises German cities on getting involved in development cooperation, shows possible projects and how they can receive financial support for them. "Sustainable municipal development through partnership projects" is supported with up to 90 percent of the costs (maximum 250.000 Euro). "Financial incentives are an important driver for decentralized development cooperation," says Eva Dick. According to SKEW, since 2012, the number of German municipalities active in development cooperation has almost quadrupled to almost 800.

In comparison to its neighbors, there is a great deal of catching up to do in Austria, says Prorok, "in Germany, development cooperation is regarded as a federal issue". A funding agency of the responsible ministry like the SKEW in Germany does not exist. There is a lack of a strategy that addresses cities as development actors, so that, for example, municipal experts could contribute their skills in international assignments. Because activities in developing countries are not easily financed from urban budgets. The funds are tight: The public funds for development cooperation of the federal states and municipalities last moved only between 5,5 and 8,8 million euros a year.

A counseling center such as the SKEW "would be a clear political commitment to this form of cooperation and desirable," say Rainer and Schröcksnadel of the Association Salzburg-Singida. The two would be satisfied with less: a first step would already be the "permanent political consent at the local level," they explain, because "town twinning with countries in Africa, Latin America or Asia have different objectives than culturally oriented partnerships with European cities and one much higher accompanying needs. "And domestic cities have a lot to offer, Prorok is sure, such as" expertise around municipal services of general interest, local economic development, administrative skills or the organization of volunteers. "

Even if municipal development cooperation is hardly an issue in Austria today, Prorok sees at least some movement in the matter: In general, the discussion about the 17 global goals for sustainable development SDG is helping more and more cities to grapple with global responsibility. And with “BACID.eu” - the abbreviation stands for Building Administrative Capacities in the Danube Region - there is a first program in which the federal government financially supports the transfer of know-how between Austrian cities and towns in the Western Balkans and in Moldova and so on Consulting projects for tourism concepts and urban planning made possible.

This is about "developing the administrative institutions in these young democracies at the local level", explains Thomas Weninger of the Städtebund. BACID is funded by the Austrian Development Agency and handled by the Städtebund and the KDZ. However, the volume is very limited to 6.000 to 10.000 Euro per eligible measure.

Vincent Acakpo, mayor of Dogbo in Benin, has long since proven that the increased cooperation of municipal experts leads to the development of practical ideas and valuable solutions. "Decentralized cooperation makes it possible to learn from each other and to exchange good experiences," he says, and is convinced: "No country can develop without involving the municipalities."

"16.200 children were born in Dogbo over the past five years," says Vincent Acakpo, mayor of the West African town. The fact that he can name this number is due to a long-term partnership with the Belgian town of Roeselare: until 2010, a significant proportion of newborns were not registered in Dogbo. Henk Kindt, councilor of Roeselare, said, "This registration is essential for people to go to school, do training, get a driver's license and get a good job ". The birth registration program, which focused on capacity building, awareness raising and digitization, awarded 2018 the "Platforma" award for "Best European Decentralized Development Cooperation Project."