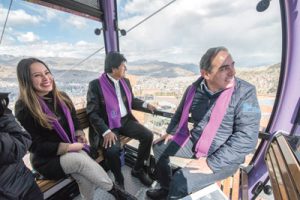 Thursday and Sunday are the big market days in El Alto, Bolivia: The offer ranges from shoes, doors and electronics to donkeys and coca leaves. An experience for every visitor - once you have made it into the city, which is 400 meters above La Paz, after all, the serpentine road is mostly clogged with creaking minibuses, road blockades are also a popular means of political protest in Bolivia. Thanks to the Vorarlberg cable car manufacturer Doppelmayr, these problems can now be easily avoided or bypassed.

On the 28. September opened the eighth cable car line in the largest Bolivian metropolitan area, the "Línea Morada" connects the two centers of La Paz and El Alto, "from heart to heart" is their slogan. 45 minutes of time saving including panoramic views over the market happening up to the snow-capped peaks of the Andes. The cable cars score with reliability, safety - and gentle nerves: "Surveys have shown that commuters save up to 17 days travel time per year when they take the cable car to work," says Reinhard Fitz, Head of International Business Development at Doppelmayr. By 2019, two more lines will be added in La Paz and El Alto to form the world's largest urban cable car network.

Next, the view is directed from the company headquarters in Wolfurt towards Africa. In Kenya's Mombasa, the first urban gondola lift in sub-Saharan Africa is in preparation, the Nigerian boom metropolis Lagos could follow as a cable car location.

Reinhard Fitz is convinced that cable cars are also driving development in African cities - but some skeptics still have to be persuaded: "As was the case in South America, the first step in Africa is awareness building: what can cable cars do in view of the urgent mobility requirements? contribute in big cities? One or the other initial project will then be followed by other urban cable cars. "Fitz will carry out these visions in more detail during his keynote address at the corporAID conference, entitled" Urban Development Markets "at 6. November in Vienna.

About a hundred years ago, Vienna was the seventh largest city in the world. The capital had more than two million inhabitants at that time, a value that is likely to be reached by 2030 again, but it is then far from the top ten largest cities. According to the United Nations, more than 230 cities worldwide already exceed this mark, with a clear upward trend. In 2050, more than two-thirds of the world's population will live in cities. And not at all in megacities that shoot at the sky, after all, almost half of the urban population lives in smaller cities with less than half a million inhabitants. And these are the fastest growing cities, especially in Asia and Africa.

While Vienna still benefits from infrastructure projects such as water pipelines and light rail lines, this is where the big challenges lie for rapidly growing cities in emerging and developing countries - as well as business opportunities for Austrian companies. Cities are already generating around 70 percent of global gross domestic product. And the economic recovery of emerging economies is focussing heavily on their urban centers. As well as the problem areas such as poorly trained mass transit systems, poor waste management, unreliable power supplies and air pollution.

"Public transport, water and sanitation, and waste management are the three sectors that have the greatest impact on sustainable urban development," said Patrick Avato, an expert on the World Bank Group's International Finance Corporation (IFC), focusing on the private sector in emerging and developing economies. Only if sustainable and cheaper solutions can be found in these sectors can cities truly serve as engines of sustainable development.

But infrastructure needs investment - and that's exactly where it hangs, according to a McKinsey study. 800 billion dollars is the annual gap between necessary and existing infrastructure investment. Anton Rettenbacher, Sales Manager of the Lower Austrian environmental technology specialist MUT sees structural problems in this respect in this country: "The financial conditions are not sufficient for Austrian companies. We are bound by the requirements of the Oesterreichische Kontrollbank, which provides us with too small an amount. We certainly can not distribute sweets. But there are competitors from other countries doing just that. "

IFC expert Avato, on the other hand, does not place the problem primarily in terms of financing: "There is a gap, but money is always found for well-structured projects. The main problem is that there are too few well-planned projects. Projects that clearly manage risks and apply the right technologies. Finding the money is not the problem then. "

Avato criticizes the prevailing paradigm that urban infrastructure should be driven primarily by public money: "It is necessary that more private funds flow into the area. That's the biggest screw that needs to be turned in developing countries. "

According to Mike Enskat, Head of Infrastructure at GIZ, the German international cooperation company, who will be holding the second keynote address at the corporAID conference alongside Reinhard Fitz, the framework conditions are inadequate in most cities in emerging and developing countries: "The administrations are there Bottlenecks for sustainable urban planning as well as insufficient revenues and structures to prepare investment projects. In addition, there is often a difficult access to financial markets, a lack of knowledge about economically viable technologies and business models that save scarce resources and have a positive climate balance. "

In this context, GIZ works according to Enskat to build up individual and institutional capacity to implement participatory urban development plans. This will be tackled through the active involvement of the private sector and the transfer of European know-how and technology solutions.

Urban implementation of the SDG

Enskat emphasized that in addition to the new entrepreneurial opportunities, the close connection between urban development and the United Nations Global Sustainable Development Goals (SDG) should be emphasized: "Cities are key players in the implementation of the SDG and the Paris Climate Treaty the new report of the Intergovernmental Panel on Climate Change has been substantiated with numerous supporting documents. "In principle, poverty reduction, food security, health care and climate protection can only be designed in the context of sustainable urban development. And under the slogan "Sustainable Cities and Settlements", SDG 11 has specifically set the goal of "making cities and settlements inclusive, safe, resilient and sustainable".

This creates completely new markets, from urban energy technologies to smarter mobility. In this context, the term smart cities refers to urban development projects that use digital technologies and networking opportunities to become more environmentally friendly and resource-efficient. This starts with bike sharing and eGovernment and leads up to the first fully networked Smart City in South Korea called Songdo City, in which sensors record everything and, for example, the refuse containers automatically report their fill level to the responsible authorities, so that garbage collection only takes the necessary routes ,

Above all, new concepts for the creation of (affordable) housing are in demand, according to the housing and settlement program of the United Nations Habitat would be in view of population growth and urbanization to 2030 daily 100.000 housing units completed - about the economic potential for energy-efficient buildings for this Period estimated at more than half a trillion euros.

Habitat concludes partnership initiatives with companies that are particularly committed to sustainable urban development with Doppelmayr. "Between Habitat and Doppelmayr an animated exchange of knowledge takes place. Achieving the SDG determines our daily actions. In many areas, such as the environment and health, cable cars help to sustain these goals, "says Reinhard Fitz.

How promising urban markets in developing countries can be identified for Austrian companies and what requirements functioning business models must meet in this context are explained by Fitz and many other experts at the corporAID conference on 6. November.