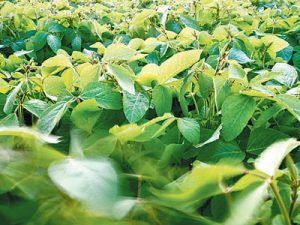 In Europe, soybeans are valued primarily as a high-quality source of protein. Soy is an essential component of animal feed today and is also gaining importance in food production. There is no tradition of soy cultivation in Europe, 95 percent of the demand is covered by imports, and around 40 million tons of soy, some of which has already been crushed, are purchased from overseas every year. However, a change is underway, not least because of the so-called protein plan with which the EU wants to increase the production of protein-containing plants. The fact that beans from third countries are mostly based on genetically modified seeds, which is met with growing rejection in Europe, contributes to the growing interest in home-grown soy. The main reference countries are Brazil, Argentina and the USA.

The cultivation of GMO-free soybeans in Europe is already being promoted, and Donau Soja in Vienna is one of the most important initiatives. The non-profit association has been active with the Donau Soya brand from Central Europe to the Black Sea since it was founded in 2012 and throughout Europe since 2016 with the Europe Soya brand. The fact that Austria harvested almost 2018 tonnes of soybeans in 200.000 and is the fifth largest soybean producer in the EU after Italy, France, Romania and Croatia is partly thanks to this initiative.

The top producers in Europe are Ukraine and Russia, which provide almost two thirds of the European soy production of 8,7 million tons. According to Donau Soja calculations, this amount could be increased to just under 2020 million tons by 11 and by at least another 2025 million tons by 3 - without new agricultural land. “To do this, fallow fields would have to be used, soy had to be included in the crop rotation and the area yield increased. With know-how and under favorable conditions, this can be increased to up to 3 tons per hectare, ”explains Donau Soja Secretary General Ursula Bittner.

Southeast and Eastern Europe will continue to offer the greatest potential for growing soybeans in the future, which is why Donau Soja has been establishing consultancy structures here for years, with repeated support from the Austrian Development Agency ADA, the agency for Austrian Development Cooperation. The current cooperation aims to establish 2021 soybean value chains in Serbia, Bosnia-Herzegovina, Moldova and Ukraine. "The production of high-quality soy products and access to the European agricultural market should offer structurally weak regions in the EU environment long-term income opportunities," explains Gunter Schall, head of the Department of Business and Development of the ADA, the promotion.

"We offer companies comprehensive training on cultivation and processing of soybeans as well as advice on the EU and the even higher Danube Soya standards," says Bittner about the program. Danube Soya is trying to set up so-called protein partnerships, whereby bulk buyers such as Rewe Germany are securing their demand for certified soya, while farmers are supporting their cultivation and, as well as the collection centers, receiving free certification as needed.

A total of 1.200 agricultural businesses, including collection centers and dealers, first processors (oil mills and toasters), but also feed and food manufacturers, should benefit from the training courses, documents, forums and trade fairs as well as the newly emerging certification structures. Farmers' associations, chambers of agriculture and research institutions are also invited to all events. “Ultimately, we want to bring the players together along the value chain so that cooperations can arise and challenges can be addressed together,” explains Bittner. In addition, Donau Soja experts are committed to improving the framework conditions, such as aligning the laws in the countries with EU law.

The participating companies are free to have their products certified according to the Danube Soya Standard. Danube Soya wants to label up to 2021 in the four countries up to 150.000 tonnes of soy and cover the fees with the running costs. An external certification for farmers is only required in the risky countries of Ukraine and Moldova, otherwise a self-evaluation, which is randomly controlled, is sufficient.

The increase in soybean sales in the producing countries and in the EU is an essential part of the cooperation with the ADA. According to Bittner, high-quality soya from Europe is already available for all animal species. One topic remains the price. Bittner is convinced that this question will be partly solved by an independent price quotation from European soybeans. In addition, a positive effect is to be expected from a higher soybean production, in addition, the utilization of soybean oil can provide financial scope. Last but not least, the European protein plan could bring subsidies.

In the meantime, Donau Soja is mostly bought out of sustainability considerations. In Austria, for example, 80 percent of laying hens are fed Danube Soya. There are also regular customers for pig fattening, such as the VLV Gustino straw farms in Upper Austria. Bittner wants to address aquaculture operators, pet food and food manufacturers as the next customer group.

In addition, Donau Soja focuses on communication with consumers and is also campaigning in the four Eastern European countries to inform about the environmental benefits of local, organic and, if possible, Danube Soya certified soy. After all, it is the consumers who are supposed to resort to the Danube Soya product.

Danube soy was founded at the beginning of 2012 as a non-profit association to establish GMO-free, source-assured quality soya from the Danube region as a brand, as well as to promote cultivation and sales. Today, the club already counts more than 260 members from business, politics and civil society from 20 European countries. Companies in the entire soy value chain - from seed production to the animal feed and food trade - have the club idea, especially Hofer, Spar and Rewe as founding members. By signing the Danube Soya Declaration - to promote soybean production in the Danube region and thus to the independent European protein supply - by already nineteen governments, the project also receives broad political backing. The association's chairman is Matthias Krön, co-owner of the Mona Group in Burgenland, which specializes in soy products. The system business - certification, consulting and training of the partners, research activities, promotion of framework conditions - is handled by Donau Soja GmbH with offices in Germany, Hungary, the Netherlands, Moldova, Poland, Romania, Serbia and the Ukraine and financed through licenses and partnerships ,