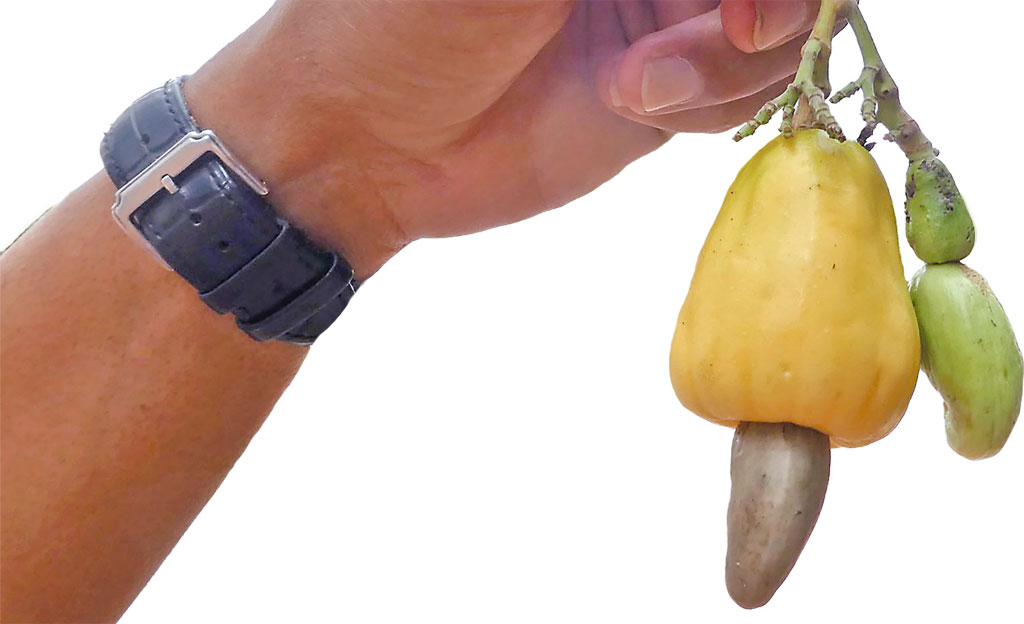 If you ask for the local tourist attraction in Parnamirim in the Brazilian state of Rio Grande do Norte, you will soon find yourself in a forest again. More specifically, in an 8.500-square thicket that swoops along winding paths and overlooks an 25 meter-high lookout tower.

The green oasis is daily photographed, filmed and admired. Because it does not consist of a variety of plants, but only one tree - a cashew. In its area 70 regular conspecifics could thrive. However, thanks to a genetic peculiarity, the branches of the natural wonder do not grow upwards, but to the side, forming new roots and branches as soon as they touch the ground.

Cashew instead of cow

For the inhabitants of Parnamirim, their "maior cajueiro do mundo", Portuguese for the largest cashew tree in the world, is an attractive source of income: tourists pay to visit the forest and buy souvenirs in the many shops around the green giant. For culinary souvenirs, the tree makes the same: It contributes to the 70.000 to 80.000 cashews a year. Many visitors learn on the spot how they actually grow: Cashew nuts look like the appendages of the so-called cashew apple, which in turn is reminiscent of a small pepper or pear. The apple is a false fruit: it has no seed in it, but is a thickened fruit stalk. The cashew kernel with its hard shell is the true fruit of the tree, which is also called elephant louse for further confusion.

Cashew nuts are available in local supermarkets and drugstores in flavors such as natural, salted or coated with chocolate. They can also be found in the form of puree, as a milk and yoghurt alternative and as an ingredient in protein bars and curry sauces. “The global demand for cashew nuts is growing steadily by around five percent a year. The trend towards veganism, which can be observed more and more in Europe as well as in the USA, will also ensure increasing sales in the future, ”says Gerard Klijn, Managing Director of Global Trading & Agency, a Dutch middleman in the nut and dried fruit business. There are already cashew camembert and cashew foie gras coated with noble mold as innovative plant-based substitutes for cheese and foie gras.

The sweet and sour cashew apple is not present in the fruit sections. It is so pressure-sensitive and perishable that it begins to rot just after the harvest. Cashew apples are therefore eaten immediately after harvest - sliced ​​and seasoned with chili, salt and sugar, for example. Or they are processed into juices, schnapps and jams. But millions of tons of fruit rot each year. In the Cashewanbau the apple is just a supporting actor.

The cashew tree (Anacardium occidentale, also Kaschu or kidney tree) is an evergreen plant, reaches a height of seven to 15 meters and, like the mango or pistachio, belongs to the sumac family. Today it can be found worldwide. The plant, which is native to Brazil, was brought to Mozambique and India by the Portuguese in the 16th century and planted there as a measure against soil erosion. The cashew tree later spread to other countries in Africa, Asia and Latin America. Cashew nuts are an important agricultural product for around twenty countries today. India and Vietnam are among the largest producers, and the Philippines, Cambodia and Indonesia are also active in cashew cultivation. More than half of the world production of raw nuts comes from Africa, above all from Côte d'Ivoire, Guinea-Bissau and Nigeria in West Africa and from Tanzania in East Africa.

According to figures from the International Nut and Dried Fruit Council 2018, the total world harvest in the 19 / 3,5 season is XNUMX million tons of raw nuts. However, extracting ready-to-eat nuts from these raw cashews is a laborious process. "Hardly any consumer who fully loads his hand with cashew nuts knows how much work there is in the snack," says Klijn.

Cashews must first be separated from the apple and dried - only one kernel is formed per cashew apple. Then the nuts are roasted together with the rock-hard casing or heated under steam. In the double-walled shell is the toxic liquid CNSL, which escapes through heat. The fragile shell can then be cracked gently. The tough skin surrounding the white cashew core is removed after reheating. Then the kernels are sorted, dried again and packed.

For the best quality, only whole kernels are selected. The top class of cashews is called “W180”: W stands for “whole”, and 180 refers to the number of kernels per pound of weight. When it comes to color, the lighter the better. Accordingly, the lowest prices can be achieved for fragments in a dark color. The most common quality class is called White Wholes 320, for which, according to Global Trading & Agency, between 2019 and 7,25 euros per kilo had to be paid from the port of origin in mid-June 7,60.

Two names usually appear on packaged products with the indication of origin: India and Vietnam. Both countries not only produce cashews on a large scale, but also import raw nuts from Africa and Asia and export them in processed form. India established itself as the center of cashew processing at the beginning of the 20th century and benefits from an intensely competitive environment, long experience - and a strong home market: the subcontinent is the world's largest consumer of kidney-shaped kernels. There is also high local demand for low-quality cashews, as they end up in powder form in curries and desserts. Today there are still a million people, mostly women, working in the industry that for a long time was characterized by manual labor and is now gradually converting to mechanization and automation.

Vietnam is the front runner in the export business: More than 60 percent of all cashew exports come from the Southeast Asian country, well ahead of India with 23 percent. The USA are the main importers of shelled nuts, followed by the Netherlands and Germany - the latter also export to many other European markets. Vietnam relied on fully mechanical processing systems early on, which, thanks to high hygiene conditions, met the quality requirements of the export markets and brought cost advantages. Because while a worker can process eight to ten kilos of cashews a day by hand, a machine can handle four to five tons. In terms of net processing costs, Vietnam is unbeaten: According to the Belgian Trade for Development Center, processing a ton of raw cashews costs 217 dollars in Vietnam, 254 dollars in India - and 309 to 704 dollars in Africa.

Not even a tenth of the nuts grown in Africa are processed locally today. For many African governments, higher local value added in the cashew sector has therefore been high on the wish list for years. In Tanzania, Nigeria or Benin, this is currently being intensively promoted. One reason for this is a recent higher price volatility for raw nuts, which was triggered in the previous year by crop fluctuations and price speculation. Also, "local processing in the growing regions could create many new and much needed jobs," says Klijn.

There have been attempts to develop the sector in Africa for quite some time. For example, help comes from the Competitive Cashew Initiative of German Development Cooperation. The initiative has been supporting six African countries since 2009 to improve production, processing, marketing and export. It will include local governments, international foundations and corporations such as Olam Inter-national, Intersnack and Walmart. The award-winning program has trained more than 400.000 small farmers, supported the formation of cooperatives and advised local processors.

Today, the largest cashew processor on the continent is Olam International, a Singapore-based food and agriculture corporation that processes raw materials, including factories in India and Vietnam, in Côte d'Ivoire, Mozambique and Nigeria.

Global Trading & Agency has also been doing pioneering work for eleven years with its own cashew factories in Burkina Faso and Benin. A large part of the production there is organic or fair trade goods, for which there are also Austrian buyers. The Dutch import agency CBI assumes in a current market study that investors from India, China, Vietnam, Brazil and Europe will build new factories in the large African growing areas.

In order for processed nuts from Africa to become a mainstream product in Western supermarkets at some point, local processors must succeed in keeping up with Asian competitors and supply larger quantities from certified factories. "This is not yet in sight," Klijn regrets and hopes that an increasing demand from Europe could lead to more momentum in Africa: "It would make ecological sense not to send the Rohnüsse around half the globe, but processed directly to deliver to Europe ".

Whether these initiatives will be successful or not, Africa is likely to remain an important source of cashew cultivation: recently, Tanzania, Kenya and Ghana have announced the planting of millions of new trees. Maybe one of them is underneath, who not only produces the Trendnuss, but grows up to the football field-sized tourist attraction.

The most famous product of the cashew tree are the magnesium- and protein-rich kernels, which are eaten mainly in nut mixes, confectionery or as an ingredient in Asian cuisine. They are also increasingly found in vegan alternatives to cheese, yogurt or milk. A mild, pale yellow cooking oil (Acajou, cashew oil) can be prepared from the kernels.

However, another oil is economically more important: the Cashew Nut Shell Liquid CNSL, which can be obtained from the shell, which mainly consists of anacardic acid and cardol, is widely used industrially due to its polymerizing and friction-reducing properties. The reddish-brown peel oil is used for the production of lubricants, paints, impregnants, brake pads, medicines and fungicides.

In addition, the cashew tree provides a resin - the cashew gum, which is comparable to gum arabic. The wood, on the other hand, is very hard and dense, resistant to termites and weatherproof. The leaves and bark of cashews are used in folk medicine to relieve inflammation and pain. The sweet and sour cashew apples contain a lot of vitamin C, are juicy and can be eaten raw. Natural and fermented liquids such as juices, concentrates, wine, vinegar and schnapps (for example cashew feni from Goa) are made from them. In Brazil, the drink Cajuína is said to have medicinal properties. The pulp can be processed into jelly, syrup, canned fruit, chutneys and jams. Nevertheless, the cashew apple remains largely unused - in India, for example, 90 percent of apples rot.