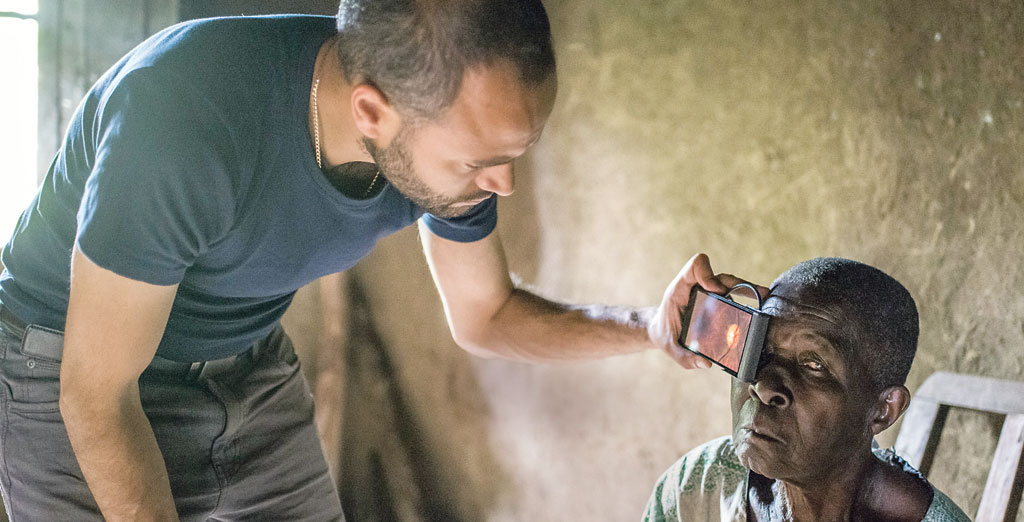 Andrew Bastawrous was twelve years old when he first saw individual leaves on trees and saw stars in the sky. This made glasses possible. Until then, the boy had known nothing about his refractive error. "Anyone who grows up with bad eyesight has no idea what he's missing," he recalls. For the British with Egyptian roots it was certainly a decisive moment: "Suddenly I could see the signs on the blackboard, follow the lessons better and become a good student. And recognizing facial expressions made possible non-verbal communication with other people. "

It was so formative for Bastawrous that he decided to study ophthalmology. The now 39-year-old is now an eye surgeon and researches and teaches at the London School of Hygiene & Tropical Medicine. And: He is co-founder and CEO of Peek Vision, a social enterprise dedicated to eye health in developing regions.

Worldwide, according to World Health Organization estimates, about 1,3 billion people with visual impairment live, around 36 millions of them are blind. "In four out of five cases, blindness can be prevented or cured," explains Bastawrous. For example, many people in sub-Saharan Africa or Asia would suffer from cataract, a clouding of the eye lens that causes blindness without proper treatment. This illness can be remedied by a "ten-minute operation for less than a hundred dollars," said the eye specialist. However, especially in rural areas, the aid fails in the approach: many patients do not know about the curability of their disease, because they have never been examined. And this is mainly due to a blatant lack of medical specialists. In Kenya, for example, says Bastawrous, 52 ophthalmologists have just 90 millions of residents, half of whom work in the capital, Nairobi. "In some regions, an ophthalmologist is responsible for five million people."

For a university health project, Bastawrous 2007 moved to Kenya. His job was to set up many smaller eye clinics in the rural Rift Valley. "We transported expensive and fragile medical equipment to remote areas, but we were often unable to use the equipment because of the unreliable power supply," he says. He therefore tinkered with a solution that manages without local professionals and expensive equipment - and discovered the smartphone as an ideal diagnostic tool. Together with British doctors, designers and software specialists, he developed the Peek Acuity app, which also allows lay eye tests to be carried out, and the Peek Retina camera adapter, which allows the retina to be photographed. The digital images can then be examined via the Internet by ophthalmologists or by artificial intelligence for abnormalities.

The spin-off Peek Vision, a social enterprise with initially seven and now 2015 employees - the abbreviation Peek stands for Portable Eye Examination Kit - emerged from a multi-year research project at the London School of Hygiene & Tropical Medicine. In the same year, Peek Vision set up a large pilot program: 35 teachers carried out smartphone eye tests on 25 schoolchildren in Kenya and found that 21.000 children had visual impairments. Such tests have now also taken place in schools and in communities in India, Tanzania, Ethiopia and Botswana, with the costs being borne by partner organizations and governments. More than 900 people have already been screened.

The system in view

From such mass examinations Bastawrous likes to produce pictures. However, he emphasizes, the "beautiful photos would end up in a very elaborate process". The vision tests are only a small part of the work: "The value of a diagnosis is low, if no treatment follows - and we do not want to create a demand that no one can serve." He is much more concerned about access to ophthalmology in underfunded health systems. And for that, first of all, it needs information about the current state. Peek Vision employees appreciate in advance which diseases and patient numbers are to be expected in a region. Then, existing structures are scrutinized: Are there any hospitals, ophthalmologists, health centers? Which stakeholders decide whether eye sufferers and defective eyes are treated? With whom are cooperations possible, who finances them? All components must be consulted and considered within the process design. "It's never easy and never boring," laughs Bastawrous. Only when the preliminary work is done, the smartphone comes to the train. Peek Vision employees then train laypersons in their use of apps and adapters - and in the procedure after the initial diagnosis. Because in the event of abnormalities, the persons examined will immediately receive information about the next steps via SMS. In parallel, the local healthcare provider will be informed about the potential patients.

A study published in the journal Lancet Global Health by 2018 confirms the success of this approach: According to Kenya, the number of children who also go for follow-up after the first diagnosis has tripled compared to conventional eye examinations.

By analyzing patient histories, Peek Vision wants to identify more hurdles. And there are many of them - lack of patient awareness, high treatment costs, long distances between patient and doctor or simply fear. "There is a widespread belief in Africa that cats eyes are used in cataract surgeries. Or people refuse treatment, because in their language the word for surgery is synonymous with slaughter, "said Bastawrous. Often, some explanation or an alternative term is enough to increase the acceptance of an intervention.

To really reach out to many people, Bastawrous hopes for more funding to fund a "total mission," "access to high quality ophthalmology for all." He places high expectations in an 2018-launched "Vision Catalyst Fund": this fund, founded by banks, NGOs and medical companies, aims to provide $ 1 billion to help governments in developing regions fund universal eye health programs. The fund was initiated by the Queen Elizabeth Diamond Jubilee Trust, an important supporter of Peek Vision. The trust has already provided the organization with one million pounds for free use of funds. Peek Vision started a pilot project for the early detection of eye diseases in Botswana. And this test run, Bastawrous says, has motivated the Botswana government to launch a nationwide program: By 2021, every schoolchild will be examined and treated as needed or given free goggles. The government has recognized the benefits, according to Bastawrous, because whoever sees well, learns and works better: "Every dollar invested in the sight of a child brings an 150-fold return over its lifetime."

Bastawrous is also striving for an innovation for Peek Vision: If the organization was initially financed primarily through donations, it should be self-supporting for the next two to three years. He would like to invest future profits through a foundation in ophthalmic services in poorer countries. Peek already sells consulting services, software and products to governments and NGOs. A cooperation with the NGO CBM has recently started to jointly implement eye health programs in Rwanda, Zimbabwe, Pakistan and Indonesia. Bastawrous: “This is our first transnational agreement with an international partner. We will help many people for whom eye health services would otherwise be inaccessible. "