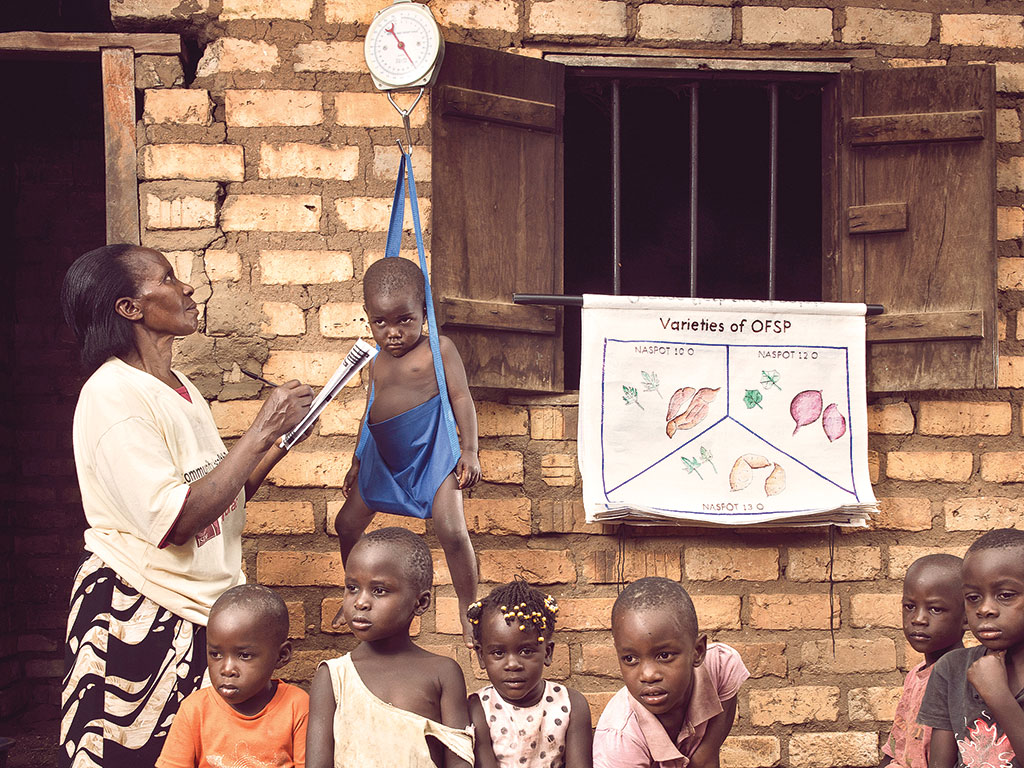 Whenever Cedric Habiyaremye gets a grumble in the stomach area, he opens the refrigerator and takes what he needs. For the Rwandan, this is a “luxury” that he recently rolled into one TED talk explained. Because in his childhood, which he spent partly at home and partly in a Tanzanian refugee camp, there were days when he only got leaves and grass to eat, and others when there wasn't even that. Today Habiyaremye is a US-trained agronomist and entrepreneur, but hunger has persisted. On the contrary: He is looking for solutions for better nutrition for people in poorer countries.

Habiyaremye is particularly fond of the Latin American pseudo-grain quinoa: “It is full of nutrients and contains all nine essential amino acids.” And he is convinced that if people were to eat more quinoa, an important contribution would be made in the fight against hidden hunger. Hidden hunger is not about calories, but about minerals and vitamins - a deficiency that affects two billion people worldwide.

Hidden hunger can also occur with well-filled plates. It occurs mainly in people who cannot afford varied meals and who have to make do with rice, corn, wheat or cassava. The insufficient supply of micronutrients is particularly widespread in sub-Saharan Africa and Asia. According to the World Health Organization, deficiencies in vitamin A, iron and zinc in particular have major adverse effects. In particular, experts warn of malnutrition among mothers and children during the thousand-day window, the critical period between the beginning of a pregnancy and the child's second birthday, during which the course is set for growth and the development of the brain and immune system.

Iron is the most common malnutrition in the world, and the resulting anemia kills around 50.000 women in childbed every year and hinders the physical and mental development of babies. A permanently low vitamin A level can in turn cause blindness, weak immune systems and thus increased mortality in children, while zinc deficiency can lead to growth retardation. The lack of iodine, vitamin B12 or folic acid can also cause permanent damage. The consequences not only affect individuals, but entire societies.

But not only malnutrition, but also classic hunger is widely a major problem. The Global Hunger Index 2020 classifies the global hunger level as "moderate"; however, it is based on data from 2015 to 2019. And even then it became clear that the world was not on course to meet the second of the 17 global goals for sustainable development - no hunger - to be achieved by 2030: In 2019, around 690 million people did not have enough to eat. 47 million children under five were emaciated, i.e. too light for their height, and 144 million children were underdeveloped due to chronic malnutrition, i.e. too small for their age. In addition, more than five million children died before their fifth birthday, often as a result of malnutrition, according to the index. 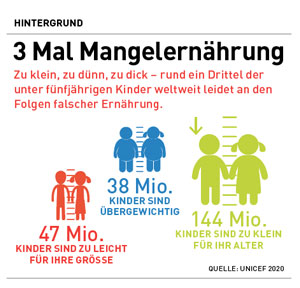 However, individual countries differ significantly in this regard: While the hunger situation in conflict and crisis-ridden countries such as Chad, Madagascar, Somalia, South Sudan, DR Congo and Yemen was recently classified as "very serious", others have shown progress in recent years. These include Cameroon, Nepal, Angola and Ethiopia, which - also due to their economic development - were increasingly able to feed their own people.

However, the Covid pandemic is now endangering positive trends. As economists from the International Monetary Fund point out in a new study, food prices rose by around 2020 percent worldwide between May 2021 and April 25 - the largest increase in ten years - while incomes fell, especially in poorer countries. This should make the diversity of the menu unaffordable for more people. School closings due to the pandemic also exacerbated the food crisis. According to a report by the United Nations Children's Fund, around 2020 million students missed an average of 370 percent of their school meals in 40 - for many children, however, school is the most reliable place for balanced meals.

The pandemic will cause the number of starving and malnourished people to rise again, fear nutrition experts such as Andreas Blüthner from the Bill & Melinda Gates Foundation. He hopes that nutrition will finally get the attention it deserves. The “Nutrition for Growth” year of action is currently running, culminating in two major events: the UN Food Systems Summit in New York in September and the Nutrition for Growth Summit in Tokyo in December. "The year of action is crucial in order to create impulses and concrete commitments to end malnutrition in all its forms by 2030," says Blüthner and hopes for financial and political commitment.

Andreas Blüthner: doing nothing is not an option

23th of June 2021
The number of malnourished people has increased due to Covid-19, warns Andreas Blüthner, director of nutrition at the Bill & Melinda Gates Foundation.

Many pieces of the puzzle in the fight against hidden hunger

There is no magic bullet to fight hunger and malnutrition. A wide range of measures are required, from agriculture to hygiene and health to education. Agricultural researcher Cedric Habiyaremye starts in the field: "Malnutrition often does not arise because too little, but because the wrong thing is grown," he explains. In addition to quinoa, Habiyaremye recommends smallholders to grow sorghum, fonio or amaranth. These plants could also defy progressing climate change.

Another approach is to make food supplements available to risk groups. According to its own information, the Canadian NGO Nutrition International supplies 150 million small children in 55 countries with two doses of vitamin A every year. This basic supplement reduces the risk of death by between twelve and 24 percent, reports the NGO.

Genetic engineering offers a controversial option. The golden rice hit the headlines 20 years ago: The genetically modified grain produces beta-carotene, which the body converts into vitamin A. However, critics fear hardly foreseeable effects on health and the environment. According to various media reports, however, golden rice will still be used in the fields: In Bangladesh, cultivation could begin this year, in the Philippines in 2023.

When it comes to supplying entire populations with micronutrients, fortification is often the method of choice - known in Austria for the iodination of salt. This is a widely used method. "Access to iodized salt was less than 1990 percent of global households in 20, today it is around 90 percent," said Venkatesh Mannar, former president of the Micronutrient Initiative, in a recent webinar. “More than a hundred million newborns benefit from a good iodine supply for their mother every year.” For him, salt is the perfect carrier for micronutrients, as the condiment is also regularly consumed by poor households and is comparatively stable in price.

Other basic foods also serve as carriers for food fortification: More than 80 countries fortify wheat, maize or rice. In Thailand there is fish sauce with iron, in Guatemala sugar with vitamin A and in Pakistan edible oil with vitamin A and D. This is also a cost-effective intervention because once the programs are in place, consumers and industry share the costs. "Every dollar invested in enrichment brings a 27-fold return because disease is avoided and income and labor productivity are increased," says Blüthner. This measure also presents some challenges in practice - for example when it comes to scaling and compliance with quality standards. The Gates Foundation therefore works with Indian authorities, among other things, to strengthen standards and their compliance, to ensure the supply of particularly vulnerable people and to disseminate newer products - such as salt with double iron and iodine enrichment.

Last but not least, good nutrition must also be affordable and in demand. For example, the World Food Program in Ethiopia has launched an initiative to make the diet of poor families healthier. They receive vouchers by SMS that they can redeem for fruit, vegetables and eggs at small retailers. With a campaign on social media, the World Bank is again trying to get Indian fathers interested in a balanced diet for their children. And the Global Alliance for Improved Nutrition GAIN recently launched digital tools for businesses to achieve healthier nutrition through the workplace. The program, which companies such as Olam International, Unilever and Google have joined, focuses on healthy eating in the canteen, education, health checks and support for breastfeeding mothers. GAIN hopes to reach millions of people around the world in this way.

SDG pioneers: working with an agenda