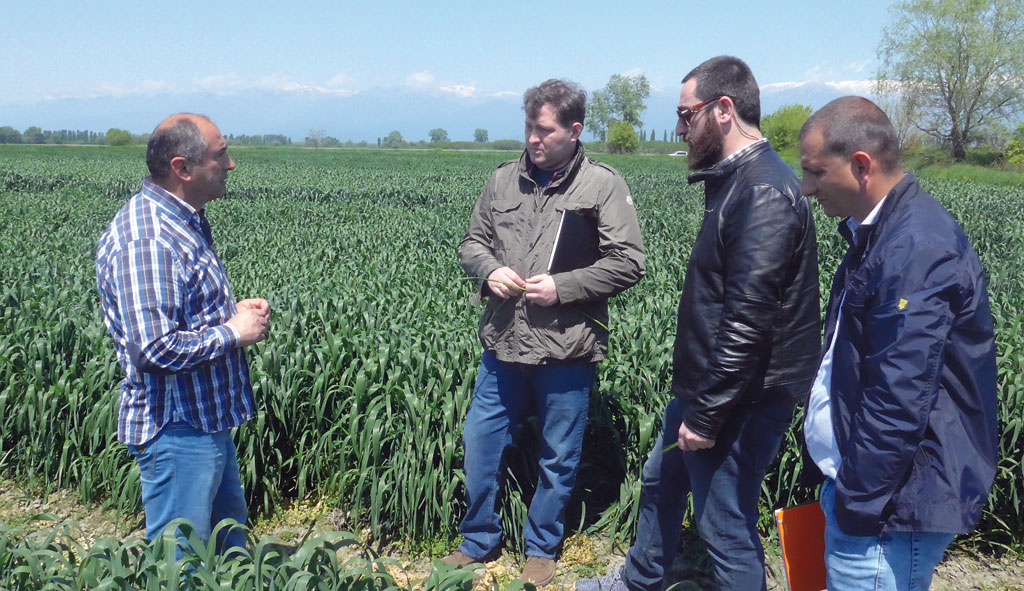 Due to its location on the Black Sea between the Greater and Lesser Caucasus, Georgia offers favorable conditions for agriculture. A quarter of the usable area is farmland, corn and cereals dominate. However, the sector lost a massive amount of productivity when the Georgian government distributed 1991 hectares to peasants in 1 hectares after the dissolution of the Soviet Union and at the same time lacked money for machinery and equipment - seeds, fertilizers and crop protection.

Through purchase and leasing, individual farmers have in the meantime reached arable land again, for which investments are worthwhile. However, for example, the area yield of wheat, which is grown in the east and southeast of the country at around 70.000 hectares, is currently only half that of Austria. In addition, Georgian wheat flour lags far behind the Austrian baking base in all its quality traits such as connective and elasticity, mineral and protein content. This does not matter much to bulk buyers, as most of the flour marketed in Georgia originates from Russia and Ukraine anyway, and the weaker Georgian flour is merely mixed - but the Georgian farmer is fighting for his own livelihood, and the country is more expensive depending on imports Bread cereals and seeds.

About five years ago, the Austrian Development Cooperation (OEZA) developed a willingness to help Georgia in the agricultural sector to support the country's EU accession efforts. As a possible partner for the project, the Austrian Development Agency ADA contacted Karl Fischer, an all-rounder in agricultural matters, who had promoted and internationalized Saatbau, the largest cooperative organization for plant breeding and seed propagation in Austria for nearly thirty years. The export quota is now more than 70 percent. It was a coincidence that Fischer had first visited the small country on the divide between Europe and Asia on the occasion of a wine expedition and had come into contact with Alexander Ediberidze, the owner of the important agricultural trading company Noblex in Tbilisi. Ediberidze is today Fischer's most important cooperation partner on site.

Since Georgia was a new market for the seed-building cooperative, a feasibility study funded by the ADA first examined how well Austrian wheat varieties were suitable for the country. Three-year field studies, such as Georgia's long-outdated, found that early wheat varieties such as Amicus and Gallus bring first-class crops.

However, the willingness of the Georgian government to establish a seed and variety system, as is customary worldwide, was also to be clarified. The fact that a seed law had been waived after independence for reasons of cost and that the associated checkpoints had been closed contributed significantly to the misery of Georgian agriculture. Fischer explains: "Certified seed of high performance varieties is the key factor in achieving high yields and quality. However, the considerable development costs involved in such seeds will not be delivered to a country where its product is not protected by law, as was the case in Georgia for a long time. "Fischer's educational work was fruitful, with Georgia announcing after much discussion Seed Act and end 2018 an associated regulation for the creation of a catalog of varieties, which already lists three varieties of seed-building. "The law is not perfect yet," says the expert, "but a basis to build on." Now, manufacturers can make a return by having their authorized partner - in this case, Noblex - license royalties for the seed produced and sold in Georgia paid.

As soon as the resolution was foreseeable, there was nothing to prevent a deeper engagement of the Austrians, which ADA supported 2018 as part of an economic partnership from April onwards. "The cooperation offers Georgia the opportunity to achieve a higher degree of self-sufficiency," says ADA program manager Daniel Rössler, calling for a promotion.

Firstly, two objectives are being pursued in parallel: Firstly, a system for the production of quality wheat seed at EU level is to be set up in the cereal growing regions Kartli and Kakheti, with the seed base coming from Austria. On the other hand, according to the Austrian model, contractually secured value-added chains between Georgian quality wheat producers and local bakeries are to be created.

Fischer has already been to Georgia for 16, advised authorities and farmers alone and with colleagues, advertised quality wheat in bakeries and inspected mills. "The difficulty of finding a suitable mill has made it difficult to build contract farming," he regrets, but admits that a lot of convincing was needed in Austria to set up a "green chain" The first large bakery signed a purchase agreement for quality wheat, it had taken five years.

With the variety development but you are on the right track. "Noblex has all the resources in hand here and has already been able to sell 170 tons of amicus grown by Georgian seed farmers", even Fischer is amazed at the speedy progress. This is also a success for the seedbed. She was already happy about the first royalty payments from Georgia.

The SAATBAU is an 1950 based cooperative that today belongs to 3.200 Austrian Farmers. From Leonding, it develops, produces and sells 50.000 certified seed per year for corn, cereals, oil and protein crops. Austria's EU accession enabled the expansion. Today it has ten subsidiaries in Europe and exports to Canada and China. The turnover was 2018 at 180 million Euro. The management went to 2013 Josef Fraundorfer and Karl Fischer, the name equality with the previous CEO and today's project manager in Georgia is a coincidence.

WiPa: retrieval of the forest