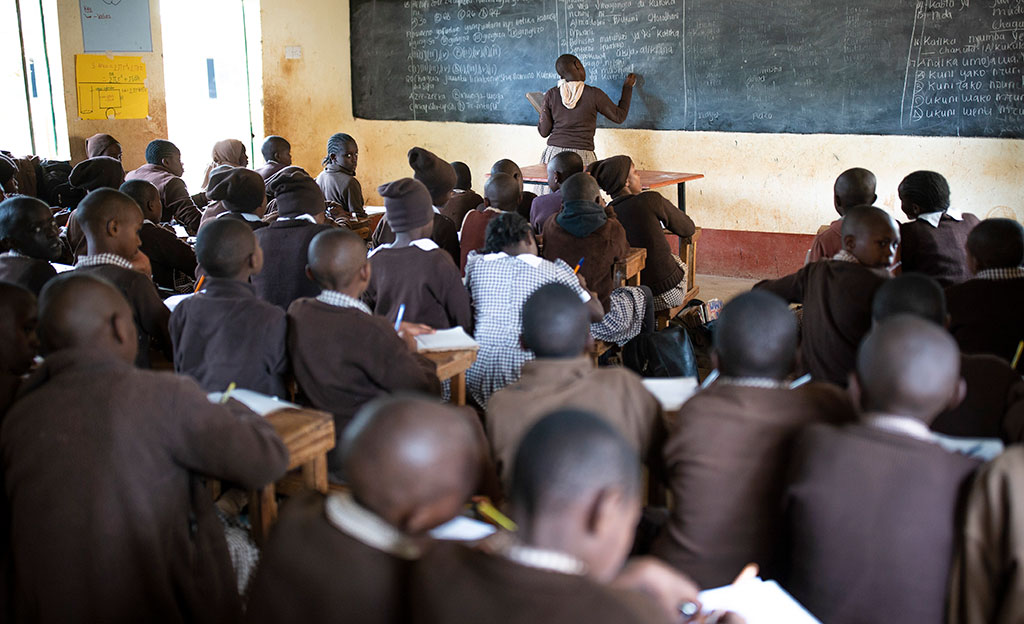 50 On average, students sit in a school class in rural Kenya. There are hardly any opportunities for individual support. There is not enough money at home for learning materials and only very few have an Internet connection. While homeschooling is a stimulus word for many parents in this country after this year's experience, it is a foreign word in Kenya. The social enterprise jumps into the breach Eneza Education from Nairobi. For eight years it has been bringing content to children via SMS - almost every family in rural Africa now has at least one cell phone.

With the help of the “Ask a Teacher” function, the children and young people can get in touch with a pool of teachers and work together on tasks. One SMS lesson costs around three cents per student. With millions of young customers already reached in Kenya, Ghana, Ivory Coast and Rwanda, Eneza can keep its head above water financially - while making a remarkable social impact.

Social enterprises suffer from a lack of income

Like many social enterprises, Eneza Education is primarily oriented towards its charitable goal and, far from government subsidies, can support itself through the sale of its services. Profits are largely invested in expanding or improving the offer. There are social enterprises in many places has become an important part of a fragile social network and a driver of innovation. Among other things, they contribute to affordable health and energy supplies, ensure the food supply and offer psychosocial support.

Joining forces for the social enterprise

But they need support to get through the crisis. Eneza can inter alia on the US Impact Investor Sorenson Impact Foundation to build. In order to reach the entire social enterprise sector, shortly after the outbreak of the global health crisis, it joined forces with around 60 other large organizations - the majority of which are active in developing countries. They have it in common Covid Response Alliance for Social Entrepreneurs launched to "mobilize support for social enterprises and raise awareness of the critical role they play in dealing with the crisis and beyond."

Leading the way back to the founder of the World Economic Forum Klaus Schwab Schwab Foundation for Social Entrepreneurship together with the Frankfurt-based venture capital fund Yunus Social Business brought everyone to one table (currently still digital): foundations, investors, corporations, philanthropists and international organizations. Also on board are existing supporters of social entrepreneurship such as Ashoka and the Skoll Foundation, corporations such as SAP, Johnson & Johnson or the Ford and Ikea foundations, as well as multinational organizations such as the International Labor Organization (ILO) and investors such as the Sorenson Impact Foundation.

“There is a wealth of organizations that support social entrepreneurs, but have often operated in parallel so far. Now these actors are getting together for the first time and pooling their resources, experience and knowledge. That shows the urgency of the situation ”, says Johanna Mair, professor for innovation and leadership at the Hertie School in Berlin and as a longstanding expert in the field of social entrepreneurship, a member of the Schwab Foundation's Board of Trustees.

As early as the spring, the new alliance raised $ 75 million as emergency aid for social enterprises. Now further funds are to be acquired and the social enterprises are to be given individual support in obtaining additional funds. The US American Duke University, meanwhile also part of this initiative, has Covidcap.com opened a portal that gives a global overview of corona emergency funds. The volume of listed aid offers in 62 countries already exceeds the astronomical sum of one trillion dollars.

For Johanna Mair, the dual benefit of the alliance is that it not only addresses financial needs, but also fulfills a platform and network function. Superordinate organizations and the social enterprises themselves receive legal aid, technological support and can exchange ideas with one another about their needs and opportunities for mutual support. "By providing the infrastructure for the exchange, the alliance has the unique opportunity to promote cooperation between different social enterprises and to improve this best practice transfer," says Mair. The past few months can already be seen as a great success: “Many social enterprises have been able to build resilience through the financial donations. And many social enterprises learned from others during this crisis because they were able to exchange ideas more intensively. "

Even if it doesn't feel like that at the moment, the corona crisis will be over sooner or later. The Covid Response Alliance for Social Entrepreneurs should, however, continue to exist beyond its founding purpose. And in the future it could accompany a process that leads to structural changes in the area of ​​social entrepreneurship. Many social entrepreneurs who operate in developing countries from the USA or Europe have been desperate for months because of the worldwide travel restrictions. “While this has been 'flying in, flying out' for many social entrepreneurs - similar to the World Bank, for example - we see a trend towards building local capacities that are much more resilient in the long term,” says Mair.

In rural Kenya, schools recently reopened after more than six months of corona-related closure. For Eneza Education, the forced homeschooling meant an enormous increase in demand. But instead of increasing prices, the social enterprise offered its SMS learning platform free of charge for six months in order to be able to help as many students as possible in the crisis - the service was financed with the help of the Kenyan mobile phone giant Safaricom. “In this way we were able to reach more than two million young people during this crisis and achieve a correspondingly large impact,” says Noan Njogu, spokeswoman for Eneza.

Eneza would like to expand its range in the future. Concrete discussions are ongoing with organizations from the agricultural and health sectors. With the help of the Eneza network, not only could the children in the most remote African villages learn better, but entire communities could also be effectively educated about health issues. And there are more than enough challenges in this area too.