Home Magazine Ethical.business In time on the spot 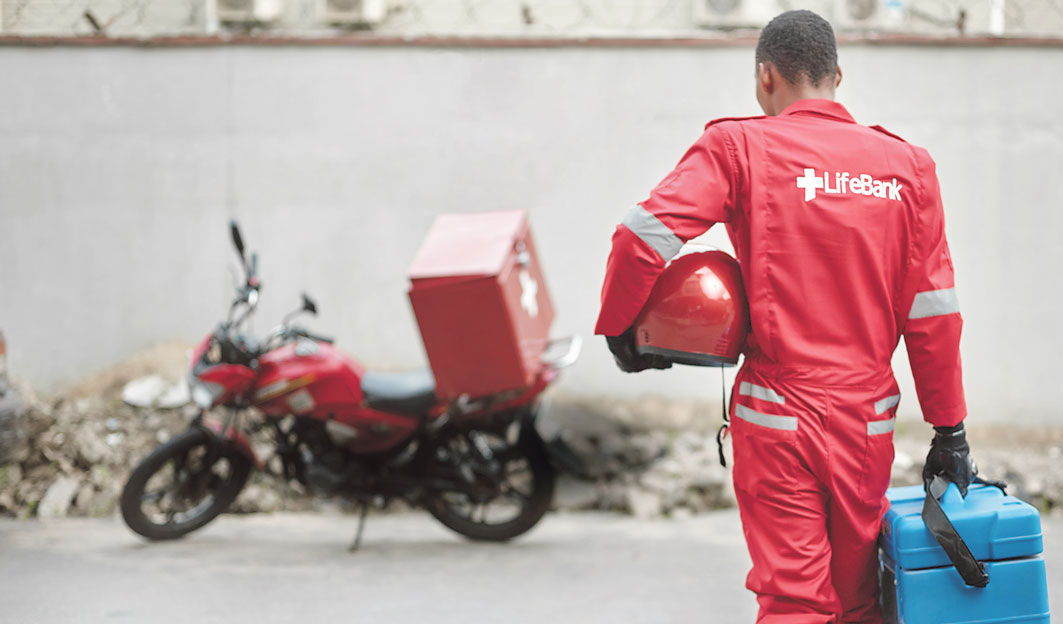 The birth of her five-year-old son was a traumatic experience for Temie Giwa-Tubosun, a US-Nigerian double citizen. The baby was delivered seven weeks early and delivered by emergency cesarean section at a hospital in the United States. Mother and child then needed intensive care. "If the birth had taken place in Nigeria, I would have died," she says. Namely, the country has one of the highest maternal mortality rates worldwide. Although the story went well, it worked: the expert in international health management decided to ensure in their native Nigeria that women with pregnancy complications are treated as well as they are.

For the British-Nigerian doctor Ola Orekunrin-Brown also a stroke of fate was the initial spark of her current activity: her sister died on vacation in Nigeria. The twelve-year-old girl, who was suddenly seriously ill, could not be brought to a suitable hospital fast enough, and no rescue plane was available throughout West Africa. Ghanese Gregory Rockson, on the other hand, read in a newspaper about a woman with severe cardiovascular disease, who only died in a Ghanaian hospital because a certain drug was not available on time.

What unites Giwa-Tubosun, Orekunrin-Brown and Rockson? All three are young, studying in English-speaking countries, and today lead aspiring companies in Africa to save patients - by increasing the pace of medical care.

Giwa-Tubosun's employees are of a particularly fast sort: young men in red coveralls and helmets racing through the megacity of Lagos on motorbikes. In their refrigerated boxes lashed to the luggage carriers they transport vital goods: donor blood. In no more than 45 minutes, the express couriers have to get the blood from a blood bank to the hospital, according to the instructions of the boss. "We are the Amazon of the Blood Banks," says the 33 year-old, who founded 2015 in December, the logistics start-up LifeBank in Nigeria and is known as "The Blood Lady". "Every third person who comes to a hospital in Nigeria needs donor blood. These include mothers after difficult births, infants suffering from malaria, accident victims or those chronically ill who suffer from sickle cell anemia, "she explains. To make volunteer blood donations more popular in Nigeria, Life Bank offers, among other things, a smartphone app for donor registration and occasionally organizes fundraisers. However, the startup is far from the target of one million active volunteer blood donors: only a few thousand names can be found in the database. However, the focus of the company is elsewhere, namely in the distribution of existing supply. Hospitals often do not know which blood banks have the right blood in stock, explains the founder. "On the one hand, doctors have problems organizing blood, on the other hand, blood banks throw away donated blood because it only lasts six weeks."

LifeBank works as a B2B interface: it collects real-time blood bank stock data and provides hospitals with an 24 hour delivery hotline. For delivery, it charges around seven euros per unit. If the hospitals also prefer transport in a box which can only be opened by the recipient, an additional charge will be made. "We do everything to ensure that the products are flawless. For example, in Nigeria, HIV is a major blood donation problem, "explains the LifeBank chief. For quality assurance, she therefore relies on certified blood banks who carefully test the blood. So far, the startup has been supplying 400 hospitals - since the previous year not only with blood, but also with medical emergency oxygen.

Even Gregory Rockson, 28, leads an exciting health start-up. Together with two friends, he founded 2013 mPharma, headquartered in Accra, the capital of Ghana. The political scientist, trained in the US and Denmark, recognized that many Africans are waiting to be treated for illness because they are not insured and need to pay for medicine from their own pockets. "For most families, medicines are the highest spending item right after food," explains Rockson. In addition, drugs in Africa are often sold much more expensive than in Europe. "Governments in most African countries are not pricing in drugs," says Rockson. In addition, important medicines are often not available in hospitals and pharmacies and can not be replenished quickly enough. In the search for affordable medicines, patients sometimes find unscrupulous traders selling inferior or counterfeit products - in Africa, the risk is higher than elsewhere.

With his start-up Rockson wants to fight these problems. It supplies small public and hospital pharmacies with prescription medicines and manages the camps. A self-developed supply chain software aggregates the data of pharmacies and recognizes demand patterns. This way, small orders can be bundled into larger ones and discounts can be negotiated with the manufacturers. MPharma replenishes the shelves of the pharmacies, avoids too high and too low stocks - and takes over the financing by the sale on commission: The pharmacies pay only for a medicine, if they sold it.

His service has many benefits, according to Rockson: The shelves are filled with original medicines reliably, prices are reduced by an average of one-third, pharmacists can concentrate on the consultation and doctors know at any time, where a drug is available. In addition, mPharma supports pharmacies in the modernization of their retail space.

With his business idea he not only made friends, says Rockson. “There is a big problem with fraud and corruption in drug procurement. People who benefit from it don't like us because we know about stocks and drug prices and provide transparent information. ”With mPharma he wants to show that you can be a“ good ”business and at the same time profitable. This also appeals to investors who have already provided the start-up with more than $ 24 million. This year mPharma bought Haltons, the second largest Kenyan pharmacy chain, with the aim of opening new branches under the well-known brand in previously underserved areas.

With 200 employees, mPharma now looks after a network of 400 pharmacies and 50 hospitals in Ghana, Kenya, Nigeria, Zambia and Zimbabwe. The company should contribute to systemic change, says Rockson and hopes to cooperate with African governments soon to improve drug availability on the continent.

While mPharma and LifeBank bring medical products from A to B, Ola Orekunrin-Brown's company is responsible for transporting the patients themselves. About ten years ago, British-trained doctor and helicopter pilot Flying Doctors founded the first Nigerian air rescue service. The tragedy of her sister, who died in Nigeria, opened her eyes to "the importance of getting critically ill patients to the right place in good time".

Today, she leads a team of some 50 emergency medical professionals, who are available at Nigeria's largest airport, Murtala Mohammed International Airport in Lagos, with a fleet of small aircraft and helicopters for emergencies where every minute counts. "Our airmen look like private jets. But inside, they're intensive care units with surveillance machines, respirators, and incubators for premature babies, "she explains. The most common uses include severe strokes, pneumonia and fractures. Flying Doctors accepts orders within West and Central Africa but, if required, also flies patients to South Africa, Germany, the United Kingdom and India. Customers include, for example, companies that are active in risky sectors such as oil and gas exploration or mining, and organizers of major events book helicopter teams. If you want to be protected in case of need, you can get a membership starting at 50 dollars per month, which covers transportation and hospitalization in an emergency.

According to Orekunrin-Brown, the Flying Doctors fly in the profit zone - and still have a lot of potential. "Many think that Africa's health care system has so many problems that air ambulances are secondary. In our opinion, they are more important for Africa than for other regions of the world: here the distances between patients and well-equipped clinics are particularly large, there are very few doctors and the road infrastructure is often miserable, "says the entrepreneur. She advocates that Nigeria should invest as a priority in the training of doctors and equipment and to enable the treatment of critically ill patients in special clinics. And, if necessary, the patient should be transported via the fast airway.

With a myth Orekunrin-Brown wants to clear up, namely "that air rescue is only available to the extremely rich". The Flying Doctors team also sets up temporary intensive care units on regular scheduled flights, reducing transportation costs by up to 90 percent. Rockson and Giwa-Tubosun are also seeking better affordability strategies: LifeBank launched the "Blood oxygen access trust" fundraising program this year, which supports destitute patients with free blood and oxygen supplies. So far, especially children with anemia and pneumonia have benefited. MPharma uses the "Mutti" financing service to make expensive medicines, such as cancer treatment, affordable. Moms pay only a fraction of the cost in advance and can pay off the rest in interest-free installments.

One thing that all three entrepreneurs like to emphasize often is that the African healthcare sector needs more entrepreneurial commitment and has many opportunities. The award-winning entrepreneurs themselves are forging ambitious expansion plans to enable more people to seek medical help in the future - always in the right place at the right time.