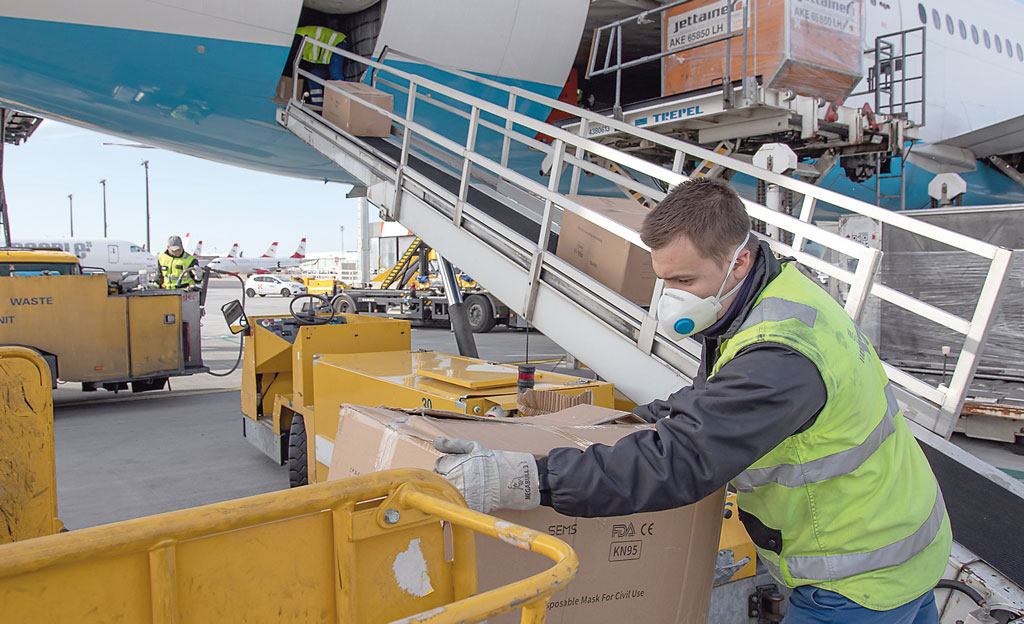 LSlowly there is movement in air travel again. For three whole months, from mid-March to mid-June, the Austrians - and not just them - had stayed on the ground. Larger passenger movements only occurred in the course of the return campaigns of Austrians stranded abroad. In addition, medical supplies from China and Malaysia were handled in Vienna-Schwechat. In April and May, flight movements at Austria's largest airport fell to four percent of the same period in the previous year.

Restricting passenger travel by closing the EU's internal and external borders has been a key government measure to prevent the further spread of the corona pandemic. In Austria, the barriers fell in mid-March. At that time it was not clear when they would be opened again.

The unprecedented situation poses an immense challenge, especially for internationally active companies. "Our companies are prepared for a blackout or a cyber attack, but planes won't take off for weeks, nobody expected that," says Christian Maurer, manager of the Cleantech cluster at Upper Austrian location agency Business Upper Austria.

Maurer looks after around 250 companies from the energy and environmental sector in the cluster, the export quota is 80 percent. Austria's abrupt switch to lockdown mode on March 16 turned the cluster manager's program upside down from one day to the next. Since then he has been intensively involved in clarifying questions raised by the new situation. “We have set up our own task force at the location agency to advise companies: How does short-time work work? Should employees be brought back from abroad and how can they be deployed? What about liability for delivery delays? How do you get bridging finance if payments are postponed? Where can production take place when supply chains are interrupted? ”Says Maurer. And he points out that the crisis also offers some member companies opportunities. At Greiner Bio One, for example, the production of plastic tubes for SARS-CoV-2 test sets is in full swing.

On the other hand, the Lower Austrian manufacturer of cutting and sorting systems for the flat glass industry, Lisec, is severely affected by the crisis. 95 percent of the family company's products are exported, around 20 branches and representative offices on all continents provide sales and service. Area Manager Johann Stöger does not describe the situation as rosy: “We had very little sales for three months, while the fixed costs remained.” Lisec is currently still on short-time work, but there will be no extension beyond July 15.

The fact that the lockdowns in the regions take place out of phase - China first took this measure, followed by large parts of Europe and then numerous other countries on all continents - made it possible to continue projects once in this region and once in that region: “A globally working one Again and again, companies experience that a region does not perform as it should for a while, ”says Stöger. In fact, Lisec has already celebrated sales successes in China. Stöger: "You can see that if the systems start up again, our business will continue." So far, the company has also recorded hardly any losses in Germany.

On the African continent, the sales region for which Stöger is responsible, the work of the technicians and fitters, like in Europe, was made more difficult by the patchwork of varying and constantly changing rules for containing the corona virus. State aid programs launched to deal with the crisis also vary widely. In some countries such as the United Arab Emirates, Lisec made use of these offers, while in others, such as South Africa, it was deliberately avoided in order to better protect employees.

With a maximum sales share of ten percent, developing country markets play a subordinate role for Lisec. The situation is different with the hydropower plant supplier Andritz Hydrowhere their contribution to the business is almost half. The company has run several hundred projects worldwide and was also able to use the time-delayed lockdowns. The early normalization in China was crucial for the restoration of the supply chain, explains Head of Communication Alexander Schwab. New orders also came from Australia and Brazil. "2020 will not be a record year," says Schwab.

The company found the official restrictions on freedom of movement and travel to be comparatively difficult. In order to complete a turbine renewal in New Zealand, for example, it had to be accepted that the technicians flown in from Indonesia would leave the prescribed 14-day quarantine in a hotel. Some construction sites were closed by the customers. In India, soldiers undertook to seal off two major construction sites overnight, which could only be shut down in orderly days later. "On the other hand, we had to withdraw our employees from numerous countries because there was no longer a guarantee that there would be opportunities to return, for example, in the event of an accident at work." This affected Morocco and Nigeria as well.

In many countries, however, the company's on-site structure built up over the years has proven itself, as Schwab explains: "We have competent local staff in more than 50 countries, which means we can compensate a lot."

Also for the logistics service provider 3LOG Premium Logistics the lockdown is a test. The SME handles international transports without having its own fleet. 3LOG can deliver to and from sub-Saharan Africa via the office in Dar es Salaam, Tanzania, which was founded two years ago. Freedom of travel is also crucial for many customers. "As long as the technician cannot travel, it makes no sense to send goods to Cameroon," explains founder Thomas Kopp using the example of a currently pending order. The activities in Tanzania put Kopp temporarily at a standstill, apart from the customs processing of imports, and brought the Austrian employee back in time. "Inquiries for transports have been coming back slowly since the end of May," Kopp now sees the first signs of a turnaround.

All four companies relied on digital communication instead of face-to-face meetings with employees and customers all over the world. Stöger describes the newly acquired competence in dealing with online tools as the greatest achievement of that time. At the same time, it was shown that personal encounters and informal discussions remain irreplaceable. "While project discussions, rough planning or detailed design can work via the Internet, negotiations and business deals will continue to take place at the customer in the future," says Stöger.

Christian Maurer is currently considering the question of the extent to which online trade fairs can be used as a marketing tool after important leading trade fairs and economic missions by the Chamber of Commerce have been canceled as a result of the corona crisis. He also sees new perspectives in this: “Online trade fairs could be particularly interesting for companies that would never have gone to a trade fair in Africa or Brazil. Not least because a virtual participation only costs a few hundred instead of a few thousand euros. ”Lisec is already one step further and has already announced a multi-day virtual in-house exhibition for its customers and prospects in October.

The systems for remote monitoring and control of systems, such as Stöger and Schwab, have proven particularly successful in the crisis. Both companies want to push these tools further and use them even more extensively.

Looking ahead, companies are cautiously optimistic. Lisec plans to increasingly serve emerging markets with inexpensive refurbished used machinery as soon as the willingness to invest returns. In the Upper Austrian cleantech cluster, the European Green Deal not only gives hope for additional demand from the EU. "There is a chance that environmental friendliness will also prevail as a purchase criterion in emerging countries," says Maurer.

At Andritz Hydro, too, the future is fundamentally positive. Experience has shown that public clients step in when infrastructure fails, and vice versa, explains Schwab. He also expects international financial institutions such as the World Bank and regional development banks to become more involved in the post-corona period in order to lead developing and emerging countries out of the crisis. And 3LOG managing director Kopp maintains that his bet on Africa will prove to be spot on in the foreseeable future.