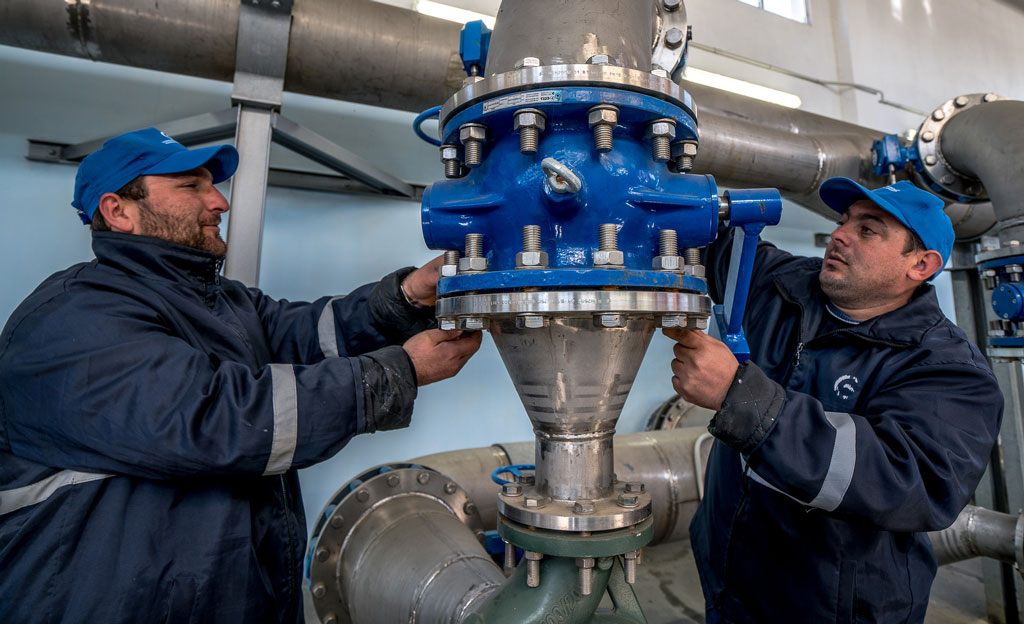 With the Oesterreichische Kontrollbank in the health sector of Asia

LAOS Supported by a soft loan from the Oesterreichische Kontrollbank, the Laotian Ministry of Health transferred the SFC environmental technology the task of improving the water supply and sanitation of the Mittaphab hospital in the capital Vientiane. At the core, Salzburg planned and constructed a turnkey drinking water treatment plant with two new deep wells and an 150 m storage tank as well as a wastewater treatment plant based on the ultrafiltration process developed by them. In the meantime, enough drinking water is available in the hospital and the risk of epidemics has been reduced. It has been extended to 500 beds.

SRI LANKA The Sri Lankan government has gradually improved the country's emergency infrastructure with foreign aid since the 2004 tsunami. The desire to build a modern emergency doctor and ambulance system led to a large order from the special vehicle manufacturer in 2018 Dlouhy in Tulln based on an Austrian soft loan. Dlouhy delivered a total of 100 ambulance vehicles with extensive medical equipment. In the summer of 2019, the last cars were handed over to a hospital in Colombo in the presence of the Minister of Health during a ceremony (see picture below).

Water projects of the German KfW Development Bank in the Balkans

Northern Macedonia The southern Vardar valley is well suited for high-yield agriculture, provided that water resources are used efficiently. KfW Development Bank contributed EUR 15 million to corresponding measures totaling EUR 24 million. The focus is on the rehabilitation and expansion of the irrigation infrastructure with a main line, distribution network and pumping station in front of the small town of Valandovo. A construction contract worth 14,6 million euros was awarded to the Strabag forgive. This wants to complete her part in the middle of 2021. User communities as well as an operating and maintenance concept already exist.

SERBIA In Subotica, just before the border with Hungary, the interconnected Palic and Ludas Lakes could provide a high quality recreational area. However, the quality of the water is still reduced due to wastewater discharges. With a KfW grant of 6,5 million euros, a biodiversity and lake conservation project was launched Posch and partner as an implementation consultant. Investments are made in sewage treatment plant and sewage system, a green belt is built around the lakes and the fish stock is regulated. The city and its municipal companies receive advice on water conservation, sustainable financing and public relations.

Northern Macedonia The Balkan country is integrated into the pan-European transport network, but has hardly made any profit from it so far. This should change with an electronic toll system that the EBRD is financing with 32 million euros. The toll stations on north-south corridor X should go online by 2020, while tenders for east-west corridor VIII are currently in progress. The advisors of iC consultants from Vienna support the state's road construction company in preparing the tender documents, monitoring the construction work and advising them on technical and legal issues up to commissioning.

UKRAINE Ukraine implemented a new building code in 2016 in accordance with the EU building directive. To support the changeover, the e7 Energy Market Analysis GmBH in Vienna on behalf of the EBRD developed a web-based software for the calculation of the total energy efficiency of buildings with consortium partners. The software, which will be freely accessible to all market players - designers, architects, energy auditors - enables the creation of easily verifiable energy certificates in accordance with the new standards. The project has already led to follow-up orders from Eastern Europe.

BOSNIA AND HERZEGOVINA The Balkan country has been participating in the stabilization and association process since 2005, which is expected to be the end of EU accession. This includes, among other things, the introduction of a computerized customs system, which enables the rapid, paper-free handling of the transit procedure in the EU. The people of Vienna; the Vienna Sausages wedoIT-solutions GMBH, Specialist in the development of IT systems for tax authorities, recently implemented a fully integrated electronic tax system called CATS in the country. This will now be followed by equipping customs by 2020. The EUR 1,7 million project is financed by Europaid.

ALGERIA In view of the increasing energy demand, the Algerian government decided in 2013 to launch an ambitious program to expand renewable energies and increase energy efficiency. The installed capacity of renewables is to increase to 2030 MW by 22.000. The EU is funding these efforts with a nearly three-year 8,2 million euro program implemented by an international consortium to which the Allplan GmbH listened from Vienna. Tasks include the development of technical and management capacities, institutional, political and regulatory mechanisms and the involvement of investors.

GEORGIA With the help of the Asian Development Bank, Georgia is improving water and wastewater literacy in the country. The water and sanitation experts at the Technical University in Tbilisi are also being trained. Setec engineering from Klagenfurt takes on this task with the University of Natural Resources and Life Sciences in Vienna. The latter conducts laboratory training on water quality analysis and assurance, Setec offers practical training on hydraulic solutions and leak detection methods so that water losses can be reduced and the water supply can be optimized. The one-year order is estimated at 450.000 euros.

MONGOLIA The Asian Development Bank supports Mongolia's efforts to improve governance and management in public hospitals. It is currently funding the construction of a model hospital in the capital Ulan Bator. The Austrian Vamed engineering won the contract to plan and build the Songinokhairkhan Hospital with eight departments and 200 beds as a general contractor and to equip it with medical technology. It is the fourth order from Mongolia for Vamed. The project is estimated at $ 25 million. The hospital is scheduled to start operating at the end of 2019.

LAOS The Graz e-education specialist bit media e-solutions completed its first major order in Laos at the end of 2018, which was financed by a EUR 3 million soft loan. The client was the Laotian Ministry of Education, which wanted to lay the foundation for a better educational offer, especially in remote regions, with modern IT infrastructure and localized software for learning management, school administration and content development. Among other things, several servers were installed in the ministry and 500 officials were trained, fifteen of them in Graz. Almost 30 elementary and vocational schools are already integrated into the system.

EGYPT The technology group received a soft loan of around EUR 10 million Frequentis In 2009, the Egyptian Inland Navigation Authority awarded the contract to set up a modern information system to regulate the transport volume on the Nile. Political changes brought delays. With the recent acceptance at the company's headquarters in Vienna by a high-ranking delegation from Egypt, a decisive step forward has now been made. The communications center in Cairo is scheduled to start operating at the end of 2019 and will monitor the 20-kilometer section of the river to Aswan with 960 base stations.