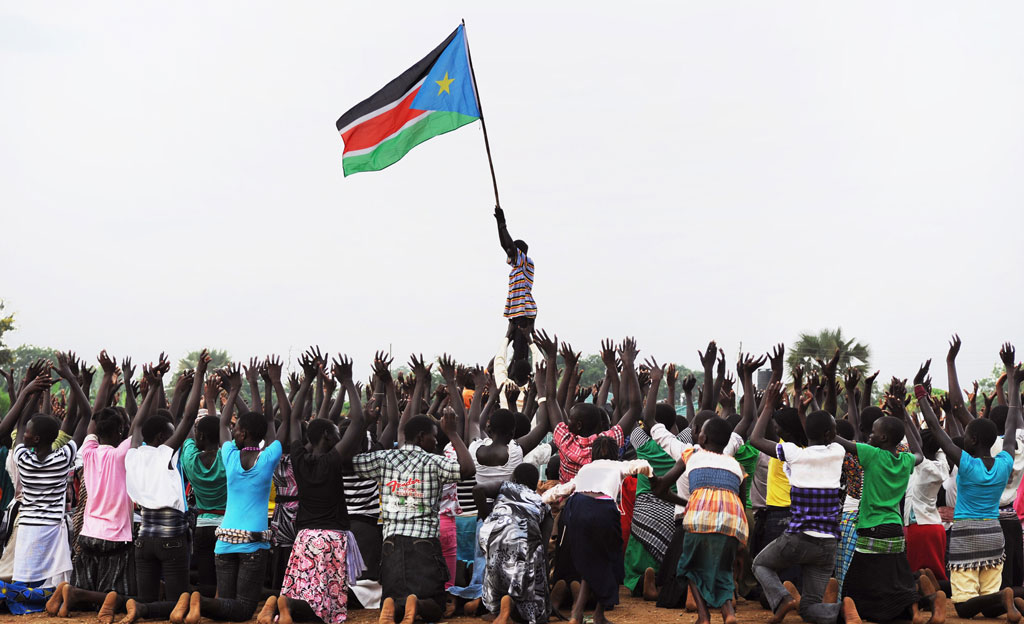 The desire for independence is in full bloom in Bougainville: on the Melanesian island with its 250.000 inhabitants, which, like the colorful climbing plant, was named after the French circumnavigator Louis Antoine de Bougainville, almost 2019 percent of voters voted for independence in a referendum at the end of 98 decided by Papua New Guinea. This could make Bougainville the newest member of the Independent States Club.

The stumbling block was made of copper: Bougainville and the government of Papua New Guinea fought for decades over the distribution of the profits from the Panguna mine in central Bougainville, formerly the second largest copper mine in the world and the main source of income for Papua New Guinea - a conflict it did in a comparable form in South Sudan or in the 1960s in Katanga in the Congo and in Biafra in Nigeria. As in those fateful constellations, tensions in Bougainville grew into a brutal civil war that claimed almost 20.000 victims - ten percent of the population of Bougainville - in ten years. A ceasefire and multi-year negotiations finally culminated in a peace agreement in 2001, the core of which was an independence referendum between 2015 and 2020.

The clear result of the referendum is not enough for independence, the final word is with the Papua New Guinea parliament. Border, trade, diplomacy and security are currently being discussed and negotiations could take years. Volker Böge, a conflict researcher at the University of Queensland in Brisbane, Australia and a proven connoisseur of Bougainville, expects independence to ultimately come. It is doubtful, however, whether this is such a good idea, particularly economically, because Bougainville is heavily dependent on the funds of the central government. For the people of Bougainville, this is currently irrelevant: “The Bougainvilleans argue that we lost 20.000 lives in this war and paid for our independence with blood. Rational considerations such as economy do not play a role at first, ”says Böge.

Even if it is not always easy to understand rationally: around the world, 60 independence movements are currently campaigning for state independence - from Abkhazia to Northern Cyprus. The main goal is a full seat in the General Assembly of the United Nations. Membership is not so much to be understood as a condition for statehood, but more as a kind of seal of approval - Switzerland, for example, only joined the United Nations in 2002.

In any case, the road to get there is rocky for independence movements. At least nine of the 15 Security Council members must consent to independence, and none of the five permanent members can veto. The biggest hurdle, however, is the question of whether the state from which the secession is sought is raising or lowering its thumb - the Security Council generally adheres to this decision.

The youngest members of the United Nations are South Sudan (2011), Montenegro (2006) and East Timor (2002). What unites the three and also applies to Bougainville: Independence was preceded by armed conflicts - in the case of Montenegro not immediately, but the Yugoslav Wars were decisive for statehood. Even though the big countries and organizations always recommend independence movements to renounce violence, good behavior often remains unrewarded: the largely peaceful and stable Somaliland, for example, is not recognized by any state. South Sudan, on the other hand, has achieved international recognition, even though international law and human rights were seriously violated during the civil war.

The prospects of independence movements are undoubtedly better if the administrative structure of the state allows separation without creating a greater precedent. In plain language, this means that the new state already exists as a more or less autonomous region. Scotland could become independent, but Cornwall could not. The boundaries for potential new states are therefore mostly already drawn. Secessionist groups that do not coincide with autonomous regions have little chance of peaceful secession.

The principle becomes even clearer using the example of the dissolution of the Soviet Union: Soviet republics such as Ukraine or Uzbekistan became independent, while the so-called autonomous Soviet republics such as Chechnya or Abkhazia that existed within such a state were denied the desire for statehood. Abkhazia, an autonomous part of the Georgian Soviet Republic before 1991 and today, like Somaliland, an established de facto regime, is sticking to its endeavors, but is only recognized by a few states due to the Georgian resistance. Probably little consolation: Abkhazia won the world championship title of the 2016-member football association for stateless nations in 47. The current title holder is Zakarpattia (Ukraine) after beating Northern Cyprus on penalties.

26. March 2020
Ryan Griffiths, American secession researcher, dares to predict which new states we will welcome in the future.

Before the First World War, at the height of the imperialist age, which was marked by the constant expansion of the great powers, there were around 50 sovereign states; today the United Nations has 193 full members. Can you predict which new states will be found on the world map in the future? It is not quite that simple, because the international trend has turned again to the detriment of the independence movements in recent decades.

Crucial to the transition from an era of state aggregation to an era of fragmentation were the first decades after World War II. The basis for this was provided by the widely accepted standards for statehood, which were laid down in the 1933 Montevideo Convention. These include a permanent population, a defined national territory, a government and the ability to establish relationships with other states. The USA in particular, which strongly insisted on the self-determination of the peoples, gave strong support to the independence movements in the middle of the 20th century.

After the end of the main wave of decolonization in the late 1960s, political factors and interests increasingly took precedence over supposed principles. This can be seen, for example, in the Western Sahara conflict: the referendum on the independence of Western Sahara from Morocco, which was decided in 1991, has not yet occurred; the European Union is either holding back or expressly supporting Morocco - the relationship with the North African country is too important in economic and migration issues. In addition, countries such as China and India are gaining in importance on the international stage, which, with regard to the recognition of new states, are also somewhat negative internationally with regard to possible independence movements in their own country.

And the United Nations was also rethinking. Already in 1992, the former UN Secretary-General Boutros Boutros-Ghali emphasized that peoples' right to self-determination does not mean entitlement to their own, new states, but - apart from a few special cases - relates to the granting of minority and autonomy rights within an existing state.

So it can be assumed that the pace of state start-ups will slow further - perhaps also because the examples from the past decades have been rather daunting. For example, Kosovo, which declared itself unilaterally independent of Serbia in 2008, is a kind of precedent for many independence movements, for example in Nagorno-Karabakh (Azerbaijan) or Transnistria (Moldova). In 2010, an opinion from the International Court of Justice in The Hague stated that unilateral declarations of independence in general and those of Kosovo in particular are not illegal under international law. However, the country has still not applied for membership of the United Nations, as Russia would not agree to this, referring to Serbia's resistance. In addition, the de facto state is now being crushed by poverty, lack of the rule of law and corruption.

At the same time, independent South Sudan is sinking into civil war and famine, while in Sudan one can cautiously dream of a democratic future. East Timor has also had significant successes in democratization and peacebuilding, but the economy is suffering from total dependence on oil exports and rampant corruption. There is a danger of a deep fall if oil reserves disappear. The price for freedom is high: after the first joy in independence has subsided, there is a risk of falling, in addition to this, the lack of a functioning state and other separatist divisions are recurring phenomena.

The question arises whether secessionism is still a contemporary and above all sensible idea. Isn't it primarily about civil rights, opportunities for self-determination and demands on the state to be transparent and fair? A multiethnic state can serve its citizens if they take these factors into account and thereby promote the growing together of the population, an ever-widening division based on ethnic categories, to put it mildly, is no guarantee of a better life.

In Bougainville you see it differently today. The fragile peace on the small island now depends on Papua New Guinea's decision to become independent. Some government officials have already signaled that they would prefer Bougainville not to be fully independent. However, given the great effort and international expertise of the referendum, it will be difficult for the government to refuse the clear vote for independence without risking further clashes.

The basic dilemma of the secessionists remains there as everywhere: they want to be sovereign and enjoy territorial recognition, but at the same time they fight the sovereignty and territorial integrity of the state from which they want to free themselves.