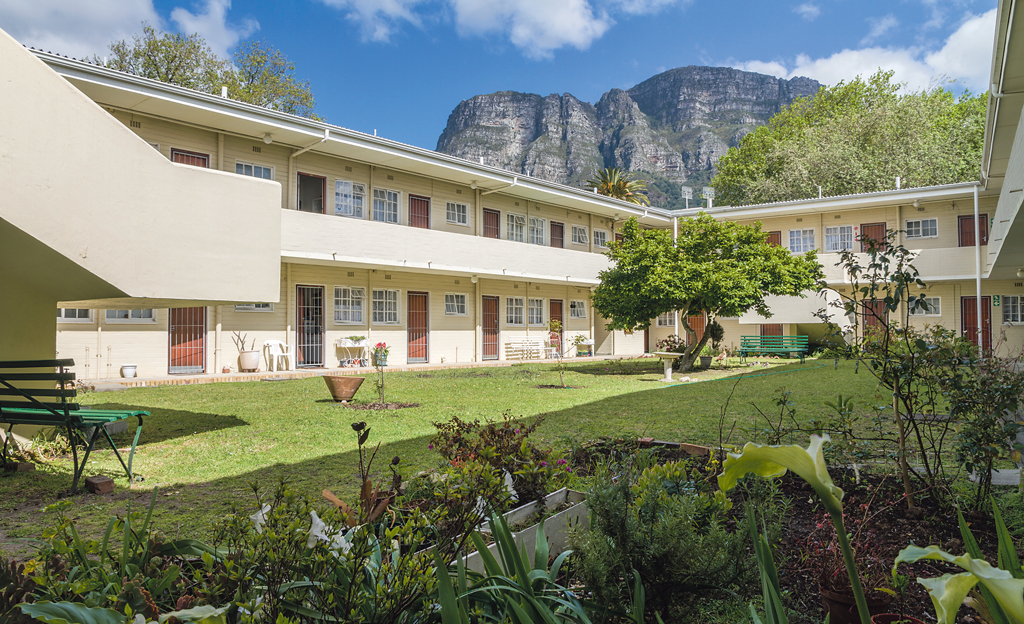 Stay at home, keep your distance - this has been the motto for months in large parts of the world. This makes the spread of the coronavirus more difficult, but also the lives of all of us. But while in the industrialized countries many people can resort to gardens, balconies or at least living rooms and other rooms, billions of people, especially in developing countries, live tightly packed in a very confined space, with virtually no alternative. The United Nations Human Settlements Program, UN-Habitat, has been warning for years that the number of people living in slums could triple by 2050 in view of growing populations and increasing urbanization - it is currently 1,4 billion worldwide. In Mumbai's largest slum, Dharavi, between 600.000 and a million people live on two square kilometers. For comparison: In the most densely populated district of Vienna, Margareten, there are also around 50.000 people on two square kilometers.

Governments are responding to the housing shortage with different concepts, and in many developing countries it has been shown that large-scale social housing on secluded areas only partially reduces the problems of many people who have to commute for hours and often with expensive money to work. In addition, slums are not just sleeping quarters, but also multifunctional commercial areas - an aspect that has so far been largely neglected in most efforts. The positive news is that there are more and more social enterprises around the world that are creating new and better living space with their innovative solutions.

Communicare is a both traditional and innovative social enterprise that operates in the Cape Town metropolitan region in South Africa. Founded in 1929, Communicare's history reflects a piece of South Africa's eventful past. Communicare was launched as an NGO before this term was even known to help poor white South Africans with publicly funded housing solutions. In the 1980s Communicare also opened the offer to the black majority, whereupon the apartheid government withdrew its financial support. Against this background, the realization matured that social housing solutions can only be offered if the model is financially viable. “It's very simple: we have to make money to do good. Social housing that is not self-sustaining is doomed to fail, ”said Michelle Matthee, spokeswoman for Communicare.

Based on this knowledge, a concept was developed that relies on cross-subsidization: Communicare rents out part of the houses and apartments at market prices and subsidizes profitable housing solutions for the poor with the profit. A robin hood approach? Matthee laughs and shakes his head when she hears that. "It's a bizarre name. We don't steal from the rich. Those who pay us rent at market prices or even a little less would do so anyway. Only that in this case your rent also helps fellow citizens who really need it. And every cent that is left goes to new houses, ”she says.

The spectrum of tenants accordingly ranges from the poorest social classes to those who have a secure job but do not earn enough to be able to borrow money for a home from banks, including South Africa, for example, teachers or nurses. There is no typical Communicare house that can be seen from afar, the offer ranges from detached houses to large complexes with apartments for single seniors. The residents of each facility are offered their own social development program to protect them from isolation and lack of prospects. Currently, the main focus is on the important hygiene measures in the fight against the corona virus.

What all Communicare living solutions have in common: They are located in safe neighborhoods, far away from crime in the townships and as central as possible. “We want to open up opportunities for tenants. They can suddenly send their children to a good school and they also pay less for transportation. It's not just about a new roof over your head, it's about a better life. We could build cheaply 50 kilometers outside of Cape Town, but that's not an advantage for the people who need it, ”says Matthee.

And there are more and more of them, because rapid urbanization and economic problems, which will become even worse in the course of the current crisis, are causing the demand for affordable yet livable living space in South Africa to skyrocket. Ten thousand people in the Cape Town metropolitan area currently live in the 3.400 Communicare apartments, and thousands are expected to increase in the coming years.

25th of June 2020
Anthea Houston, an expert in social housing in South Africa, will get even more work as a result of the corona crisis.

Hasit Ganatra, founder of the social enterprise ReMaterials, is still a long way off from such dimensions; he has so far taken care of around 700 houses. The busy Indian with his almost 70 employees does not build houses, but takes care of the roofs. This is the greatest weak point in many slums. Most of the 65 million Indians who live in slums do so in makeshift houses and huts with corrugated iron roofs. Hot in summer, leaky and loud when it rains, brittle - corrugated iron roofs lead to enormous problems. The only alternative is concrete roofs in the Indian market, which are, however, unaffordable for most poor people. “People want long-lasting, dense flat roofs that are also suitable for collecting rainwater or drying spices,” says Ganatra.

Ganatra, who returned to his hometown Ahmedabad in the western Indian state of Gujarat after studying technology in the United States, spent years looking for a sustainable and cost-effective solution and experimented with different materials. After 300 attempts, the prototype for roof panels was found under the name ModRoof. The solution consists of light-colored sheets of cardboard and plastic waste, as well as coconut fibers and sand, which are waterproof and durable, and easy and quick to install. Thanks to their insulating properties, the temperature in the houses is reduced by up to ten degrees compared to corrugated iron roofs. A roof for an hut with an average size of between 20 and 25 square meters costs the equivalent of around 700 euros - that is more expensive than a corrugated iron roof, but significantly cheaper than concrete slabs. Half of ReMaterials' customers finance the new roof with micro-loans, which will be repaid in installments within two years.

Ganatra leaves nothing to chance. Bananas were distributed on the prototype to test whether the roofs can withstand jumping monkeys. And they can easily withstand the weight of several people. “Our customers are proud of their new roofs. They have dinner there, some of them sleep on them, and children let kites fly from there, ”says Ganatra, who does not want to be discouraged by the drop in sales, which ReMaterials has to accept this year because of the corona virus. "In 2021 things will go up again", he is convinced - and is already planning roofs with solar panels and, recently, also modular walls for slum houses.

Ganatra was supported in the development of his idea by the management consultant Deepa Prahalad, daughter of the world-famous economist CK Prahalad. She gets enthusiastic when she reports on the positive effects of the new roofs. 30 percent of customers would have founded or expanded a company within six months of installing their roof. After all, they would no longer have to spend their nights protecting the children and their property from the rain. “Having peace of mind is a completely underestimated state. Imagine that entrepreneurs in Austria have to take care of water, electricity or dry floors - how much time do they have to make their customers happy and expand their business? Taking a few worries away from people is a really effective way to boost entrepreneurship, ”says Prahalad.

Austrian journalist Sonja Sagmeister also discovered her heart for recycled roofs. A taxi ride in Vienna got the stone - or rather: the brick - rolling. Cameroonian taxi driver Ferdinand Nforbi showed her videos of mountains of plastic waste on the streets and on the beaches of his home country, Sagmeister then researched innovative recycling systems worldwide - and finally found a solution with multiple uses. The plastic waste can be pressed together with sand to form roof tiles, which in turn represent a more stable and ecological alternative to the corrugated iron roofs that are also omnipresent in Cameroon.

Nforbi quickly returned to Cameroon to organize the plastic collection. Other employees of Sagmeister's newly founded company Amabo take care of the recycling. "The bricks are locally produced ecological products, and they are also durable and unbreakable, which is a huge advantage when it comes to transport in Cameroon because of the miserable road conditions," says Sagmeister.

What was initially a kind of hobby project for which Sagmeister took a sabbatical is beginning to take shape. The first ten houses are covered, significantly more are to follow. Amabo received significant support in the start-up phase as part of an economic partnership from the Austrian Development Agency ADA and was the first company to receive funding from the African-Austrian Investment Facility launched by the Austrian Development Bank OeEB in 2019. Due to a lack of competition, Amabo is already the leading roof tile manufacturer in Cameroon - in the long term, Sagmeister would also like to turn its start-up into an important plastic recycling company.