Home Magazine Global.business Green recovery as a way out of the crisis 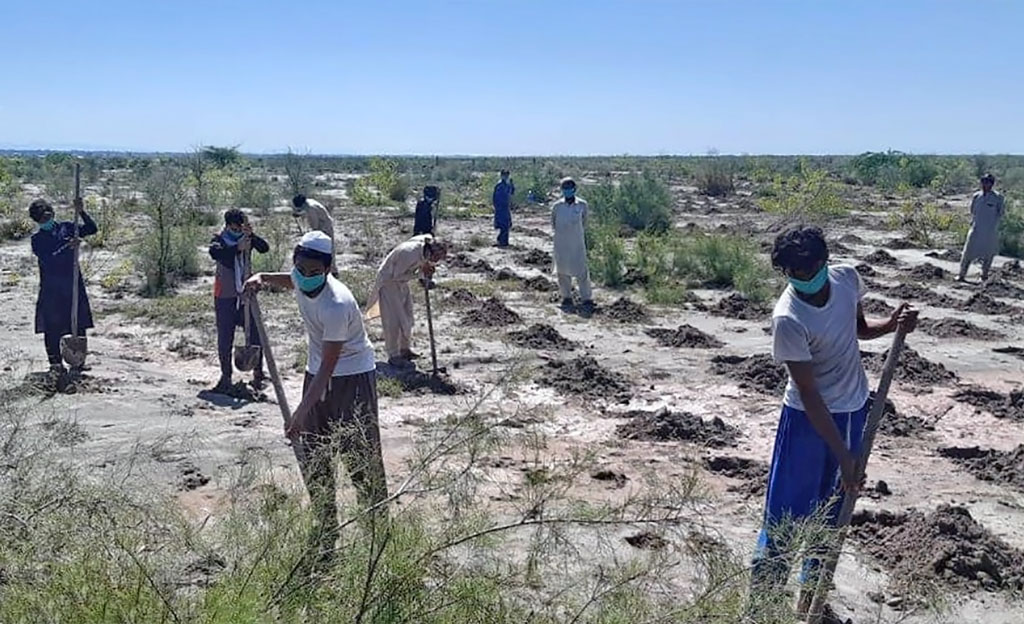 Three billion new trees and 1,5 million new jobs by 2023: that is the goal the government of Pakistan is aiming for a large-scale reforestation program tracked. Launched in 2018 by Prime Minister Imran Khan under the slogan "10 Billion Tree Tsunami" to make the country, which is plagued by rising temperatures, droughts and floods, more climate-resilient, this project is now really picking up speed in the Corona year. In the spring of Pakistan, millions of people lost their jobs as a result of the lockdown. Day laborers, workers and migrant workers who had returned home were left empty-handed without any security. The government then hired an additional 84.000 people as tree planters. The pay, like the minimum wage, is just under three euros per day - the demand for the planter jobs is nevertheless enormous in times like these.

For Stephen Hammer, this combination of new jobs and new trees is “a good example of how the demand for paid work can be reconciled with environmental goals in developing countries.” Hammer is responsible for the so-called green recovery at the World Bank Recovery or green recovery. It's not just about planting trees. Rather, the slogan describes measures that combine coping with the economic and social consequences of the corona crisis with efforts to reduce greenhouse gas emissions or to increase resilience to the consequences of climate change.

Like many other experts, Patrick Schröder, energy and environmental analyst at the British think tank, sees it Chatham House, a historic opportunity in green recovery that opens up new business activity after the corona crisis. “We are running out of time in the climate context. Now we have the unique opportunity to set the course for the future, for example by massively accelerating the energy transition, ”said Schröder.

Already in April, during the first lockdown, the participants of the Petersberg Climate Dialogue, an annual ministerial meeting initiated by the German government in preparation for the United Nations climate change conference, agreed that after the pandemic, “a climate-friendly restart of the economy for a more crisis-proof future” is required. "We have to shape economic stimuli globally in such a way that we succeed in simultaneously achieving the goals of the Paris climate protection agreement and the global goals for sustainable development," said the German Environment Secretary Jochen Flasbarth.

The main protagonists of the green recovery discourse can be found in the USA and Europe, such as the World Bank or Chatham House. The European Green Deal is regarded as the most tangible undertaking to date for how the political goal of the Paris climate protection agreement of operating in a carbon-neutral manner can be tackled and linked with an economic upswing. The deal is a broad-gauge program designed to reverse the trend on three fronts: resource use, biodiversity, and pollution. All economic sectors are to be involved - specifically, it is about switching to environmentally friendly technologies and innovations in industry and transport, decarbonising the energy sector and increasing the energy efficiency of buildings. The project is inclusive. For example, countries with a higher dependency on fossil fuels are to be supported in the transition to sustainable energy sources through a “mechanism for a just transition” on both a technical and a financial level.

Patrick Schröder is convinced: “What is currently happening in the EU will ultimately also have an impact on developing countries.” And the latter give clear signals that one wants to participate in a green recovery under the motto “Building back better”. Only: while the industrialized countries are counteracting the crisis with enormous stimulus packages and at the same time investments in a green recovery are conceivable and feasible, things are completely different in poorer regions of the world. On behalf of many emerging and developing countries, for example, Costa Rica's Environment Minister Carlos Manuel Rodríguez declared in the spring that as a result of the global pandemic, fiscal leeway is shrinking as never before, debt is growing and unemployment is rising. How dramatic the situation is a few months later can be seen in the unprecedented flood of emergency and help calls received by the International Monetary Fund. At the end of November, the latter had released new loans totaling more than 82 billion dollars for 100 countries so that they can weather the crisis.

Economic growth is declining around the world compared to last year, but some developing countries have been hit particularly hard by the crisis. The recovery forecasts are also very different.

In addition, the top of the IMF and World Bank promoted debt relief for the poorest countries at their autumn meetings. A topic that Ulrich Volz, financial expert at the German Development Institute and Director of the SOAS Center for Sustainable Finance in London, according to the utmost urgency - otherwise a global debt crisis of unimagined proportions threatens in the near future. In his opinion, in the current context, only a concerted haircut can release sufficient funds so that the developing countries can act in the short term and invest in a green restart in the medium term (see interview).

9. December 2020
Ulrich Volz, head of the London SOAS Center for Sustainable Finance, calls for a haircut for developing countries in an interview.

In addition to the debt problem, the concrete provision of financial aid for developing countries is required. At the World Climate Summit in Copenhagen in 2009, the industrialized countries agreed that from 2020 onwards, 100 billion dollars will be available annually for developing countries to generate significantly more CO2 can save and the costs of adaptation to climate change are cushioned. However, this high sum has not yet been reached, and there is still a lack of uniform accounting rules. The fact that multilateral climate funding reaches the target countries via various channels is only one factor that ultimately makes it difficult to calculate and predict.

In any case, a central channel is the one established in the course of the Copenhagen Agreement Green Climate Fund GCF. He has around ten billion dollars at his disposal over the next four years. Only in November did the Board of Management approve a dozen new projects: They range from the establishment of a green finance instrument in Mongolia to helping smallholders in Guatemala adapt to climatic changes to the introduction of energy-efficient technologies in Bangladesh's textile sector. Most of the projects were prepared before the pandemic. During the implementation, however, particular attention should be paid to the link between climate protection impact and the creation of jobs, says GCF spokesman Simon Wilson. However, he expects corona-related delays in implementation and additional expenses, such as the purchase of protective equipment.

Austria is now also spending additional funds on the GCF. After there has been a lot of criticism in the past few years about the rather small sums of money that flowed from Vienna to the fund by international standards, the federal government quintupled the domestic contribution a few weeks ago. Instead of the 26 million promised to date, 2023 million euros will now be paid in by 130. "With this international contribution - especially in times of the global corona pandemic - we are creating a threefold benefit: Investments in climate protection save our livelihoods, enable economic reconstruction in particularly crisis-ridden countries and create jobs and perspectives against poverty," stressed Environment Minister Leonore Gewessler the added value.

The big players for a green recovery

The multilateral development banks play a key role in financing green recovery in developing countries. With their direct crisis aid, the banks are currently working primarily to support health systems and cushion economic and social shocks. For example, the World Bank provides up to 160 billion dollars over a period of 18 months.

In addition, according to Stephen Hammer, the World Bank also wants to actively shape green recovery in developing countries. Hammer already has in April a sustainability checklist presented, which is intended to help political decision-makers examine planned measures to revitalize the economy, from cash transfers to direct investments in new infrastructure, for their suitability for green recovery. Hammer: “We learned in the last global financial crisis that governments can take measures that ultimately set a country back. With the loosening of environmental regulations and taxes, there are already examples of this in this crisis. ”The modest core message of the World Bank is currently:“ At least don't make it worse. ”

The World Bank is now in talks with the individual developing countries in order to advance specific projects, for example in the energy, water and transport sectors. The starting points for cooperation with developing countries are the nationally determined contributions (NDC) - climate goals that each country formulated as a result of the 2015 Paris Agreement.

The interest of investors from the private sector should also be encouraged. According to the World Bank, blended finance and green bonds are among the most important instruments that financial institutions can use to mobilize private investments in difficult environments. However, Hammer complains that the necessary data is sometimes lacking with regard to developing countries. If studies praise the advantages of electromobility, that does not mean that the market in a certain African or Latin American country is ready for widespread use. “Oxford researchers looked at 125 studies in this context - only three of them looked more closely at less developed countries. That shows the discrepancy that needs to be reduced, ”says Hammer.

The economic chances of a consistent green reconstruction are immense. McKinsey, for example, estimates that investing 75 to 150 billion euros in green stimulus programs could mean 180 to 350 billion euros in added value, three million additional jobs and a 15 to 30 percent reduction in carbon emissions by 2030. Many developing countries are well aware of this - but only very few want to put everything on the green recovery card. And there is no clear trend towards this at the development banks either.

This was most recently made clear at a summit on sustainable financing organized by the French government in mid-November. There, the representatives of 450 public development banks from all over the world agreed to significantly expand and accelerate investments in renewable energy, energy efficiency and clean technologies. However, it was not possible to agree on binding criteria. The Asian Development Bank in particular did not endorse the corresponding final declaration. As far as the pace of the coal phase-out is concerned, no one wants to be pushed by Europe. The Inter-American Development Bank and the World Bank also abstained from signing. Nonetheless, the Asian Development Bank emphasizes the importance of green recovery - and is mobilizing 2030 billion euros for climate finance by 80. In addition, it announced in July that it would expand its partnership with the Green Climate Fund.

And in Pakistan, too, the green recovery that has been initiated is not without ambivalences: While billions of trees are being planted, the country is simultaneously investing in numerous new coal-fired power plants in order to improve the gaps in the electricity supply and stimulate the economy. It is clear that the endeavor to set the course so that a green recovery also takes effect in developing countries in the next few years must be brought into line with the reality of many poorer countries.