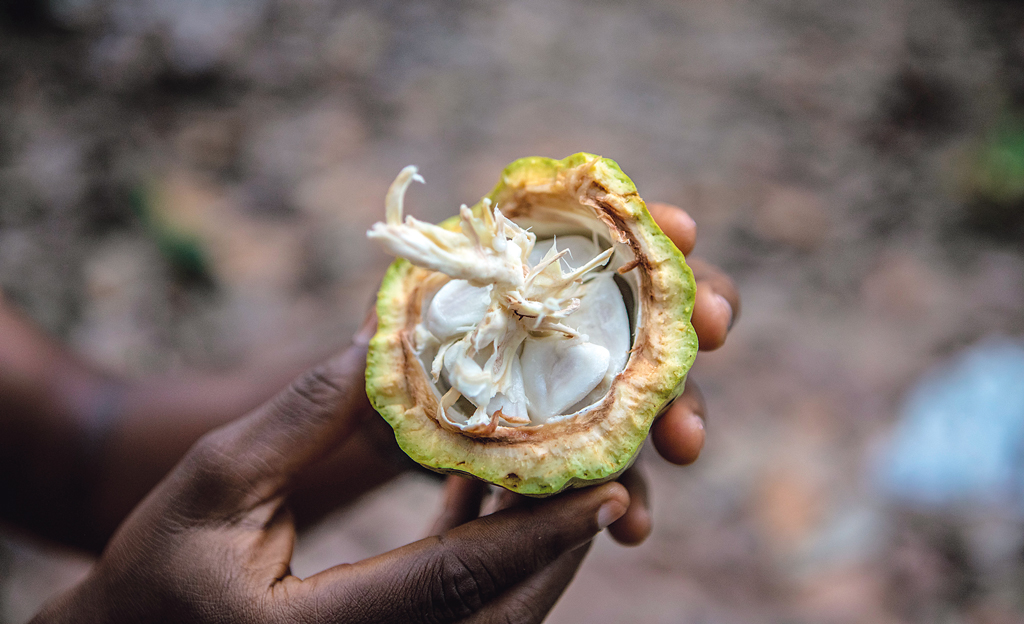 Anyone who eats or processes fruit usually sticks to the simple formula: pulp yes, seeds no. This applies equally to cherries, avocados and mangoes. The cocoa pod is an exception, as it is harvested primarily on the basis of its seeds. The 20 to 50 beans that are in each of the elongated fruits are extracted, fermented, dried, roasted and processed until they are finally consumed as chocolate, cocoa or ice cream. In conventional production, only a small part of the white pulp is required for fermentation. Most of the pulp, the bean husks and the fruit husk, however, are disposed of.

This means that at least 80 percent of the fruit remains unused. Far too much, say some manufacturers and researchers, and are looking for innovative ways of recycling leftovers. Because the cocoa farmers in Côte d'Ivoire, Ghana, Ecuador and Indonesia have always known that there is potential in the whole fruit. They eat the cocoa pods fresh, squeeze juice from the pulp or prepare cup tea.

Delicious as a whole

The Fraunhofer Institute for Process Engineering and Packaging in Germany is one of those players who want to increase the industrial use of the fruit. The research project "CocoaFruit" has been running since 2019. Together with industrial partners, new ingredients are to be developed from the previous waste products. According to process developer Susanne Naumann, it's worth it: “The pulp tastes tropical, fresh and fruity, its extraordinary aroma is suitable for drinks, jam and yoghurt. And a food ingredient rich in protein and fiber can be obtained from the cocoa pod. ”Since the low increase in value of cocoa beans and price fluctuations in recent years have had major economic and ecological consequences for cocoa farmers in America, Asia and Africa, the expert sees other ingredients in the sales opportunities the fruit also has potential for poverty reduction.

In fact, there are already the first products on the market that don't just focus on the bean. The Swiss chocolate manufacturer Barry Callebaut, who supplies customers such as Cadbury, Hershey's and Nestlé, is doing pioneering work. At the end of 2019, the group presented “Cacao-fruit Experience”: a line of ingredients made from beans, pulp, the fiber-rich peel and the fructose juice of the cocoa fruit, which are suitable for smoothies, baked goods and confectionery products, snacks and chocolate. With Mondelez International, the first branded company has jumped on the bandwagon; cocoa balls and fruit strips are available in the USA under the CaPao brand. With "Wholefruit Chocolate", Callebaut also offers a chocolate made only from components of the cocoa fruit, which therefore contains 40 percent less sugar than conventional products. Chocolatiers and restaurateurs are expected to work with it in the coming months, and in 2021 the XNUMX% product could also be offered in stores. Above all, it is intended to appeal to “Millennials and centennials for whom food not only has to be tasty, but also good for the planet,” says Bas Smit, Global Vice President Marketing.

But the new line not only has marketing advantages: the more efficient use of raw materials can help to increase the overall production volume of chocolate. Cocoa and chocolate manufacturers are geared towards growth; at least in February 2020, forecasts still assumed that the market, which currently weighs 43 billion dollars, would grow by more than five percent annually by 2025. And last but not least, says Smit, the growing countries themselves would also benefit: "Since the entire harvest is now valuable, this also means more added value for the cocoa farmers."

The latter in particular is a key concern for the Swiss-Ghanaian start-up Koa. Koa was founded in 2017 by Anian Schreiber, Michael Acquah and Benjamin Kuschnik to "contribute to sustainable growth in rural Ghana" (see interview). Koa produces 35% cocoa fruit juice in its own factory in Assin Akrofuom in central Ghana. A separate process had to be developed for this, because the juice is highly sensitive due to the warm climate: it is obtained and cooled directly at the farmers' premises with the help of solar energy. In the factory, where XNUMX people have found a job, the cocoa fruit juice is pasteurized and bottled for export to Europe and Japan. It can be used as a fruity ingredient in pralines or as an exotic component in cocktails. In July, the Swiss chocolate manufacturer Felchlin launched a couverture that consists only of Bolivian cocoa beans and Ghanaian juice as a sweetener. Koa has recently also been sold as “Majus - Jus de Cacao” in Germany and as “Kumasi Juice” in the Netherlands.

The Basel start-up Kokojoo is also trying to get customers excited about a new type of cocoa drink: Kokojoo is not made from the pulp, but from cocoa bean shells and is available with or without caffeine. But founder Dayog Kabore wants to be more than just a beverage manufacturer. Its declared goal is the complete processing of the cocoa pod into new, innovative products. In August he therefore launched a health and fitness line under which beverages, bars and biscuits with cocoa ingredients are to come onto the market. Like the Koa founders, it is important for Kabore to create as much added value as possible in West Africa - he is also planning to market cocoa products in the growing areas themselves.

Interview with Andrea Werdin, Head of Marketing at Koa

3. September 2020
Andrea Werdin, Head of Marketing at Koa, is convinced that cocoa fruit juice will soon be on everyone's lips.

A lot is still possible with the use of cocoa pods. The bean shells are already used in the cosmetics industry or as fertilizer. The German start-up Spoontainable makes edible spoons from the shells of the beans. If products made from single-use plastic are banned in the EU in 2021, the cocoa spoon might be the hour. And the vast amounts of packaging that arise with takeaway orders can be reduced by using reusable containers - cocoa could also play a role here. In any case, in July the London design studio PriestmanGoode presented the first containers made from bean husks. As it stands, the cocoa pod could soon no longer just stand for chocolate enjoyment.