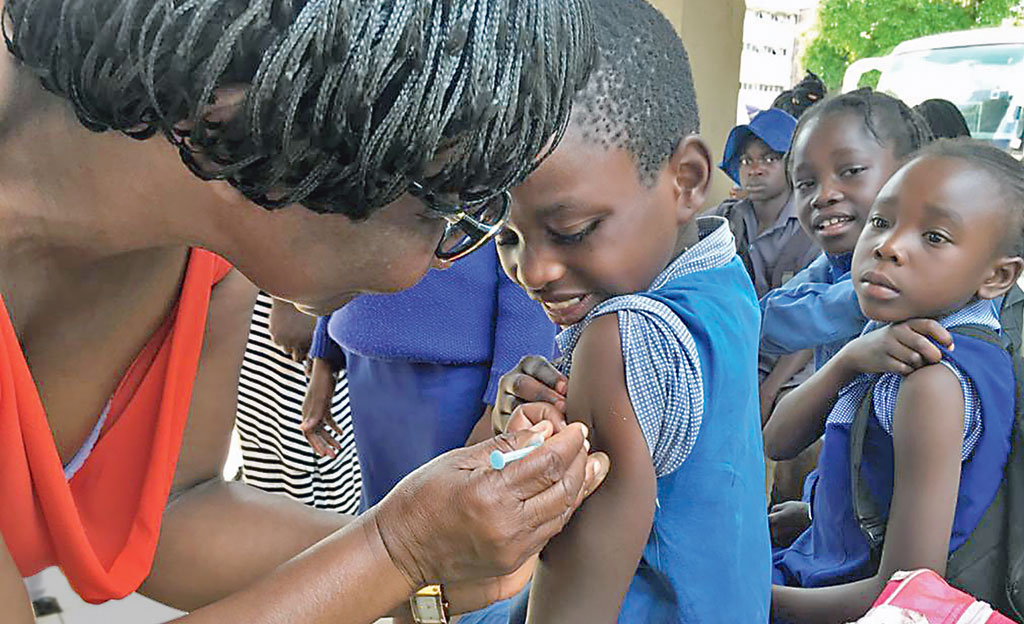 Schools are closed, public transport is stopped, panic is spreading because of the rampant epidemic, because not enough has been vaccinated. Ebola in West Africa? Plague in Madagascar? Measles in Carinthia! 25 measles cases have already been registered there this year, according to a regional news portal, the measles even have "the Carinthian population still firmly under control". Sounds dramatic, it is also, especially when you expand the perspective. Because there is no question of a supposedly harmless childhood disease: 112.000 measles cases were reported worldwide in the first quarter of this year - and every year around 100.000 people are still dying from the consequences of this infection.

Decades ago, measles claimed 2,6 million deaths each year, and 2000 to 2017 vaccinations reduced 80 percent. According to Cochrane Collaboration's global network of researchers, since the turn of the century measles vaccination has prevented more than 20 million deaths.

But now the number of cases is rising again - and not only in developing countries. According to the World Health Organization (WHO), around 2016 reported some 5.000 measles cases in Europe last year, which were already more than 80.000 last year. In Austria, currently only 84 percent of people are vaccinated with the necessary two doses against measles - far too few to achieve the so-called herd protection, which also protects infants who can not be vaccinated against measles. That would require an 95 percent immunization rate. The fact that this is not achieved in Austria is not due to the money - the measles-mumps-rubella vaccine belongs to the free vaccine offer - but to a widespread Impfskepsis and negligence.

According to a recent survey by the Austrian Association of Vaccine Manufacturers, 16 percent of Austrians consider vaccines skeptical, with more than half of the population even believing that they often cause serious side effects. The opposite is true: health damage due to measles disease is by the factor 100 to 1.000 more likely than risks from the vaccine. "It's really a paradox that people doubt one of the best protection we have in medicine today. Especially with the vaccinations there is so much secure knowledge that it shakes me personally deeply, "says Ursula Wiedermann. Four printed labels with stop signs and an unequivocal "admission forbidden" are hanging in front of the tract that leads into the realm of Mrs. Wiedermann - she is director of the Institute for Specific Prophylaxis and Tropical Medicine of the Medical University of Vienna, President of the Austrian Society for Vaccinology ÖgVak and thus Austria topmost vaccine. On her white coat hangs an orange badge with the inscription: "Vaccinated! - Protected! - Sure! "The slogan is part of a campaign to help the busy doctor reach out to Austrian health workers.

For example, in the current discussion about the introduction of compulsory vaccination, Wiedermann also believes that care must be exercised when it comes to restricting the decision-making ability of the population, but health workers need clear guidelines: "The compulsory vaccination should cover all health care workers. So doctors, nurses, midwives - apply. It should also be considered whether the measles-mumps-rubella vaccine is mandatory for children before entering kindergartens, daycare centers and schools. I believe that the approach that was last followed in the Ministry of Health - 'Everything is in one's own responsibility' - makes things a bit too simple. "She justifies this with the lack of health literacy in the population:" You can Only release people into self-responsibility if they also have sufficient knowledge. The public sector and the entire school and education system are therefore required to provide information as early as possible in education and training. "

In New York, 300 people have contracted measles since last October - after only two cases a year in 2017 - after which Mayor Bill de Blasio declared a state of emergency for parts of Brooklyn and introduced a compulsory vaccination. Violations will be punished with up to 1.000 dollar penalty. Measles vaccination was partly introduced years ago in ten EU countries, above all in Eastern Europe. Hungary shines with a vaccination rate of 99 percent, Slovakia achieves 97 percent and Slovenia 94 percent. According to a recent study by the European Commission, however, citizens from countries with mandatory vaccination are particularly skeptical about vaccinations.

But what would happen if people could no longer be vaccinated? Which almost forgotten diseases would return? It is absurd that people in developed countries voluntarily give up vaccinations, while in other parts of the world children are denied vital vaccinations because of the lack of funding and hurdles.

As always, a look at the neighboring continent is worthwhile, because in Africa there is a glimmer of hope in the fight against the most common infectious disease in the world: malaria. Of the 219 million malaria cases worldwide in 2017, 90 percent fell to Africa. All in all, 435.000 people, including 266.000 children under the age of five, died there - one dead child every two minutes.

A new vaccine has now taken up this fight: RTS, S, from which the pharmaceutical company GSK now provides up to ten million doses of the WHO free of charge after decades of research and development (see interview). "The malaria vaccine has the potential to save the lives of tens of thousands of children," says WHO spokesman Christian Lindmeier. The World Health Organization recently launched the world's first malaria vaccination campaign in Malawi, East Africa. In the next three years 360.000 infants will be vaccinated in Malawi, Ghana and Kenya - and in the long term, the campaign could be extended to the whole of Africa.

However, the chances of success are currently no more than 40 percent. The malaria parasites transmitted by the Anopheles mosquito bites are highly complex, resistant and adaptable parasites that are far more difficult to control with vaccines than viruses that cause measles or Ebola. Therefore, mosquito nets and basic educational efforts remain indispensable until further notice. Pedro Alonso, director of the WHO's malaria program, describes the new vaccine in this sense as a reinforcement of the unfortunately still imperfect toolbox in the fight against malaria.

Savior at the minute

27th of June 2019
The director of the malaria research program of the pharmaceutical company GlaxoSmithKline, Lode Schuerman, has declared war on the deadly infectious disease. Tuberculosis should soon be vaccinated ...

Another difficulty is that vaccination requires four injections over a two-year period - a challenge especially in rural Africa. The problem is the WHO wants to gradually. According to Lindmeier, however, the first experiences are a source of happiness: "So far, there has been a great deal of commitment to implementing this pioneering program, including health workers and communities committed to protecting their children. This will be crucial to the final success. "

Beyond that confidently makes that also in the fight against Diphtheria Tetanus whooping cough (DTP), which requires likewise several inoculations, in many countries of Africa impressive achievements were achieved. This is the conclusion of a recent large-scale study by several US and UK universities based on DTP vaccine data from around 880.000 children in 49 African countries. For example, estimated third-dose coverage in Africa increased from 2000 to 2016 by 72,3 percent. However, the discrepancies between countries are still huge: in Morocco (99 percent) and Rwanda (98 percent), DTP vaccination coverage is particularly high, particularly low in Somalia (42 percent) and Southern Sudan (26 percent). In addition, the city-rural divide: For example, in the Ethiopian capital Addis Ababa 93,1 percent of children vaccinated against DTP, in parts of the North Ethiopian Afar region, there are only 9,7 percent.

Like in Rwanda, where the US company Zipline has been using drones to bring urgently needed blood to hospitals since 2016 (see also corporAID Magazine issue 75), vaccines could also reach remote regions in the future. Ghana is the start here: In April, the world's largest drone network for beekeeping supplies was installed in the West African country. Around the clock, 120 drones launch from four distribution centers and supply 2.000 health care facilities across the country - the vaccines are to be delivered no later than thirty minutes after telephone appointment, which can be vital for emergency treatment such as snakebite antisera.

"Innovative distribution technologies make the transport of vaccines easier and, above all, safer," reports WHO spokesman Lindmeier. This safety also includes a continuous cold chain, which is currently often a major logistical challenge. The blockchain technology could also help in the future: the German Development Bank KfW and the vaccination organization Gavi have recently launched a pilot project to explore the possibilities of this technology for supporting vaccination campaigns through a complete tracking of consignments.

The future of vaccination is on the move more than ever, not only in terms of transportation, but above all in terms of research into new vaccines: "In the future, it will no longer be only vaccines against infectious diseases, but also against cancer, diabetes and Alzheimer's - because these are the diseases of civilization, with which we have to do more in our latitudes, "says the domestic expert Ursula Wiedermann. And this future is not so far away: "I expect that in the next ten years, some exciting vaccines will be added. There's been a revolution in thinking and technology. "

Revolutionary successes have marked vaccination for decades: smallpox, which caused up to every tenth death in the Middle Ages and even the 20. In the 19th century, around half a billion people fell victim to vaccinations, which has now been eradicated for almost 40 years. There were only polio cases in two countries - Afghanistan and Pakistan - and diphtheria and many other diseases have been repressed. Forty years ago, every fifth child in the world received life-saving vaccines, today it is 2018 percent. This benefits above all the children in developing countries.

But in Carinthia, too, vaccinations are currently in high demand again: a few days after the measles cases became known, more than 1.000 measles vaccines were issued in Klagenfurt alone - in the entire April 2018 it was only 38.

Infobox: Successes in the fight against cholera and meningitis

A severe cyclone raged in Mozambique in March, not only killing more than a thousand people and causing serious damage, but also led to a cholera outbreak as a result of the floods. The Mozambican government reacted quickly and, with the help of international organizations, had 800.000 people vaccinated within ten days - even in the most remote areas reached by helicopter, motorcycle and boat. In addition, the destroyed water system was quickly repaired. Just four weeks after the outbreak of the epidemic, the specially established cholera centers were closed again.

After 1990 people in sub-Saharan Africa became ill with meningitis in the late 250.000 years, health ministers in the countries concerned, international organizations, and the pharmaceutical company Serum Institute of India made the development of an affordable meningitis vaccine a priority. 2010 launched the first MenAfriVac vaccine specifically developed for Africa, more than 300 millions of people were vaccinated in the so-called meningitis belt and, wherever this happened, the disease disappeared. MenAfriVac is therefore considered a model for public-private partnerships in the field of vaccine development.