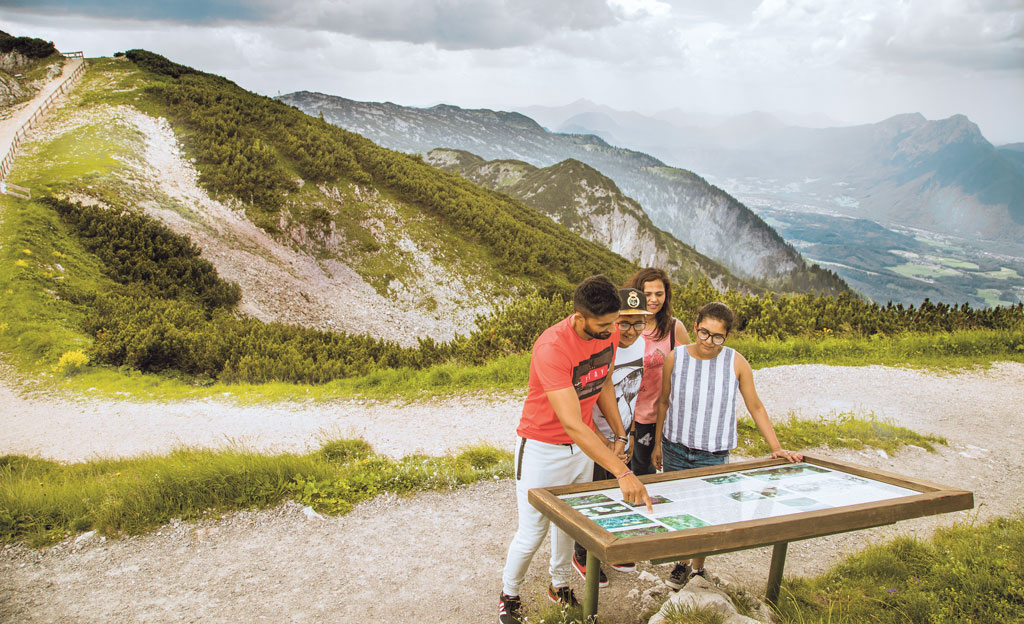 ZTo welcome you there are non-alcoholic cocktails and a long list of vegetarian dishes. A warm dinner is also served after 21 p.m. In the room there is a kettle for morning tea and the toilet is separated from the bathroom and has extra water access. With small details like these, hoteliers are well positioned if they want to make guests of an aspiring travel nation happy.

This does not mean travelers from China, even if everyone is talking about them because of their numbers: According to the World Tourism Organization UNWTO, the Chinese made a record 2018 million trips abroad in 149 and spent 277 billion dollars on them. From Hallstatt via the North Pole to Sydney, the new major travel power is omnipresent today (see also corporAID magazine 76).

In the shadow of China, the next Asian globetrotter giant that the tourism industry is adapting to is growing up: India. In terms of population size, the country already plays in the same league with China. According to statistics from the Population Reference Bureau, the subcontinent currently has a population of 1,392 billion, while China is just over 1,398 billion.

However, Indian citizens are still moving across the border in significantly fewer numbers than the Chinese counterparts: Vivek Neb, an expert in global tourism at the consultant Grail Insights, estimates that there will be around 28 million trips abroad this year (around $ 25,4 billion) in Singapore. "The difference is explained by the size of the middle classes of both markets," said Neb. "But since India's foreign travel market grows by ten to twelve percent annually, it will soon be about 50 million trips a year. In the coming decade, India should offer tourism professionals similar opportunities to China. ”

Christine Mukharji, who experiences this dynamic on site, also expects the Indian travel market to “mature and have a strong future”. The tourism expert has been working for Austria Advertising in New Delhi for more than twenty years. “Even if the consumption behavior of Indians drops again and again in the short term due to economic reforms, their travel activity is becoming increasingly important due to the socio-demographic development,” she explains. "The population is growing rapidly, and rising incomes are creating a larger and more affluent middle class that can and wants to afford to travel."

18. December 2019
Christine Mukharji, who has worked for Österreich Werbung in India since 1997, tells about the emerging travel nation.

For Neb, there are several types of travel who like to pack their bags: “It is young people who, we assume, travel to demonstrate their social status. It is important for them that their holidays are Instagram-compatible. Young families and middle-aged group travelers who want to break out of their routine and recover are also important market players, ”says Neb. And every fourth traveler is traveling for business reasons.

Mukharji estimates that 200 million Indians could potentially afford a vacation abroad today - although they also take budget-friendly, regional trips by a few hundred euros into account in their projection. Cheap vacations have become affordable for many due to the constant addition of new flights and the advent of low-cost airlines. And another travel hurdle, namely missing documents, is assessed by Neb as quite surmountable: “Today, only a fraction of the population, namely around 68 million Indians, have a passport. With more and more issuing offices and simpler processes, it is becoming increasingly easier to get one. ”

The two experts believe that Indians are mobile anyway, and the figures from the Ministry of Tourism on domestic tourism confirm this: According to them, the population made around 2018 million trips in their own country in 1.800 - in 2000 it was 220 million trips.

"Indians like to go on a beach vacation in Goa or are traveling in northern Rajasthan or Kerala in the southwest," says Mukharji. Since the country offers numerous pilgrimage sites and sanctuaries to followers of all major faiths, spiritual journeys are important. And well-known sights are also on the must-see list of many compatriots: The Taj Mahal Palace is visited by around 5,4 million locals annually.

First India, then the world

If Prime Minister Narendra Modi has his way, the Indians should "first get to know their own country well before they go abroad". In the past few months he has addressed the population several times with a travel recommendation: “By 2022, before India celebrates its 75th year of independence, I would like to ask all of you to visit at least 15 local travel destinations.” Indian tourism is supposed to be one of those receive a strong development impulse. Modi encouraged people to travel to areas without a good tourist infrastructure. “Sometimes difficulties bring new opportunities,” he explained, “people will build new facilities and thus create jobs.” And as a result, it is hoped, foreign guests would also come. According to the government, the huge and multifaceted country counted only 2018 million international arrivals in 10,5.

Despite the directive on home leave, trips abroad will probably not lose their appeal. Especially from April to August, when it is hot and rainy in many regions, Indians like to visit destinations with a temperate climate. In Europe, many are drawn to mountain peaks and lakes. The scenery is seen as a landscape of longing, fueled by Indian mythology and blockbuster films that were often shot in the Himalayan region of Kashmir and later in Switzerland - and also in Austria - in many cases. "Austria is known as a family destination with clean air and rich in water," said Mukharji. Indian tourists especially like to visit Zell am See / Kaprun, Innsbruck, Salzburg and Vienna. And they are coming more and more often: In 2018, Austria Advertising counted almost 193.000 arrivals from India, an increase of 400 percent compared to 2008.

France, Italy, Switzerland and traditionally Great Britain are even more popular: A large number of Indian descendants live there who keep in touch with their homeland. Around 40 percent of the 500.000 Indian tourists visiting the UK visit family and friends.

A phenomenon that Australia is now also experiencing: Because around 600.000 Indians have now settled Down Under, visitor tourism is growing from year to year: More than half of the around 330.000 Indian Australian tourists travel primarily to maintain personal contacts. Spirituality is also a reason for long journeys: Saudi Arabia as an important place of pilgrimage for Muslims is supposed to attract around 200.000 pilgrims from India for the annual Hajj. "These Mecca trips for Indian Muslims are often heavily subsidized and are handled with our own charter flights," says Mukharji, which is why she does not count the Hajj among the classic vacation trips.

Other popular foreign destinations for Indians are practically on their doorstep: Malaysia and Singapore are important bases for the Indian diaspora in Asia and have steadily increasing flight connections with smaller and larger Indian cities. Singapore with around 1,4 million Indian guests in 2018 is considered the top destination, Malaysia lags a little behind with around 600.000 guests.

Indians on the radar

The new tourists are now being wooed by many destinations. “More than 70 countries have opened tourism offices in India,” said Neb. Only one country is currently afraid of the often discussed “overtourism” phenomenon: Bhutan. The kingdom, which focuses on high-end tourism, requires minimum sales and fees of $ 250 per day from international guests. So far, the Indian neighbors have been exempt from this, so Bhutan is considered an inexpensive short trip option for many families. But because Indian guests now account for two thirds of the approximately 275.000 arrivals (2018), Bhutan should now pull the brakes - and Indian tourists will soon have to dig deeper into their pockets for their break in Bhutan.

Other countries are rolling out the carpet for Indian tourists, who are considered to be exceptionally generous and who also arrive in the off-season. A welcome strategy is, for example, easier entry. The Brazilian President Jair Bolsonaro recently announced that Indian citizens will be able to enter Brazil without a visa in future. Not a matter of course for them: According to the Henley Passport Index, they can only visit 59 countries without visa applications. For comparison: For holders of an Austrian passport, 185 destinations are visa-free.

Malaysia, in turn, attracts Indians with quickly processed online visa applications and positions itself in campaigns as the ideal destination for newcomers to the trip: as a cultural melting pot, the country offers a familiar culture and - for many of the new tourists elementary - a rich culinary offering that reflects their own way of life and religious ones Conviction corresponds. Indians appreciate it when they find a large selection of vegetarian dishes and Indian restaurants on vacation and are not actively offered beef or pork, Mukharji explains.

In current campaigns, Australia emphasizes their shared love of cricket: When 2020 cricket world championships are held in seven Australian cities, many Indians should cheer on the spot - and then stay longer and enjoy skydiving and hot air ballooning.

Two top destinations already chosen by Indians continue to make an effort: The shopping paradise Dubai with two million arrivals a year attracts visitors with Bollywood testimonials and also advertises new guests in smaller cities. And trend destination Thailand wants to inspire the new globetrotters for areas that are still underdeveloped for tourism in the north and east - and increasingly organize Indian weddings: hundreds of guests, who are accommodated in five-star hotels, often fly in - a particularly lucrative segment.

Indian travelers will be encountered more and more often. The travel giant that grows up here is unstoppable.

The Comeback of trees