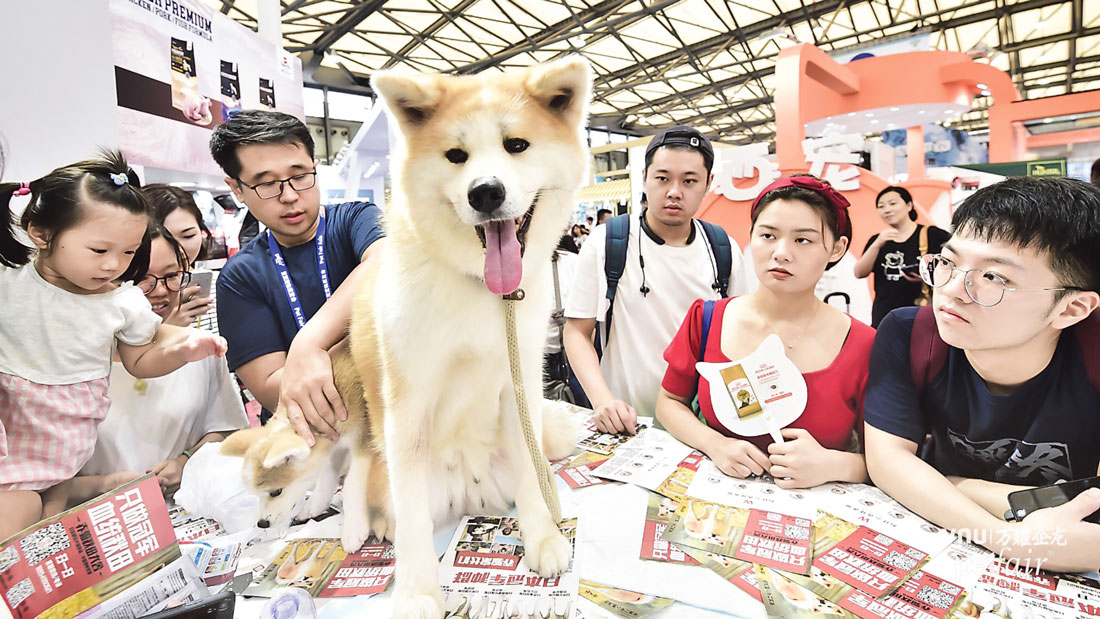 There are queues at Austrian dog breeders, kittens quickly find a home, exercise bikes are provided for golden hamsters and aviaries are lovingly set up for budgies. Since many people's lives have mainly been happening in their own four walls, the longing for a special closeness is likely to have awakened in some: to animal companions with which pandemics and lockdowns are supposed to be easier to cope with. Pets are - in addition to food deliveries, walks and zoom calls - another corona phenomenon that was recently even worth a cover story for Der Spiegel magazine under the headline “We stay at the zoo”.

Heinz Schabreiter not only reads about the boom, he also experiences it first hand. He is the managing director of C&D Foods Austria, a Styrian manufacturer of cat and dog food. In any case, in the production halls in Birkfeld there is no trace of the poor economic situation: “We work in extra shifts and at full capacity,” says Schabreiter about the “luxury problem of strong demand”. Around 16.000 tons of wet feed are processed, packaged and provided with colorful labels for sale in 30 European and Asian countries on behalf of international branded goods here every year.

Pet food is part of the pet supply industry, which includes grooming products, medical treatment, insurance, and toys. You are prophesied positive future prospects. By 2027, sales in the industry are expected to grow by around six percent annually. "Pet Care" is already a huge market, the size of which is estimated by Global Markets Insights at around 195 billion euros (2020). In the traditionally most important regional market, the USA, sales totaled 85 billion euros and in Great Britain, the largest market in Europe, around four billion euros.

The main drivers for future growth, from which large corporations such as Mars Petcare and Nestlé Purina, regional players and emerging start-ups want to benefit, are primarily two factors: first, the willingness of pet owners to spend more and more money on their pets, and second, an increasing one Number of households with animals - both trends can not only be observed in richer countries. According to analyzes published by Euromonitor International last year, many neo-pet owners live in emerging countries or countries that were previously not exactly known as pet hotspots. According to this, young Colombian singles increasingly want to live with cats, in Peru there is already a pet in every second household - with a growing love for cats and small dogs - and in South Africa Boerboels, shepherds and Dobermans are no longer just frightening guardians in front of the house, but already on the threshold from protective farm animals to valued pets. Even Saudi Arabia and the United Arab Emirates seem increasingly to be joining the global pet trend.

The industry is paying particular attention to the Asia-Pacific region, and especially China. Because whether young single women in Shenzhen, small families in Beijing or seniors in Shanghai: Family growth with fur and on four legs has been in great demand for several years. According to the Chinese Pet Industry White Paper, the one hundred million cats and dogs mark in urban households was broken for the first time in 2020. “Rising incomes are definitely the contributing factor behind the pet ownership explosion in China. After buying an apartment, a car and being able to finance everything for their own child, many people turn to pets. The growing loneliness in the big cities also plays a major role here, ”says Yannick Verry, project manager of the international trade fair Pet Fair Asia, a strong link between wealth, urbanization and keeping pets (see interview).

A few years ago, "larger dog breeds such as huskies, which are suitable as status symbols," smirked Verry, were particularly popular in China. Today, smaller breeds such as pugs, Shih Tzu, Shiba Inu, poodles or corgis are being fetched from pet shops or animal shelters as they are more suitable for city apartments. In 2020, however, pet owners began asking for cats, while dogs lost their popularity.

Rodents and reptiles, which, as is well known, do without walking, are also popular. The fish traditionally popular in China, on the other hand, are becoming less and less popular with the younger generation. According to the Chinese Pet Industry White Paper, the love for cats and dogs alone has created a market of almost 27 billion euros (2020). Pet food accounts for more than half of sales, with growth in the veterinary and pet accessories sectors in particular.

25. March 2021
Yannick Verry explains why the love for pets is growing in China and Southeast Asia and what characteristics shape the Asian pet market.

Also in India, the second Asian giant, an animal seems to be part of the happiness of life more and more: In 2019 the Indians only had 20 million domestic dogs, but this number is expected to rise to 2023 million by 31. According to Euromonitor, the dog trend is also being driven in India by the growing number of small families living in cities. During the long lockdowns in spring 2020, even the “virtual dog adoption” boomed as a remedy against loneliness, as reported by the media portal Quartz India: sponsors commit themselves to pay for an animal in the shelter for life. In return, they can build a relationship with their sponsored animal through video calls and visits. In addition to video and domestic dogs, cats, fish and birds are increasingly popular in India. And although India's 360 million euro pet market is still in the puppy age compared to China, it is one of the fastest growing in the world today.

The industry also has high expectations with regard to the potential that is emerging between India and China: “600 million people live in Southeast Asia. Many local markets will develop in a similar way to China, ”Verry is certain. Attitudes towards pets change with generation and purchasing power, as Euromonitor has found for Vietnam, for example: While older Vietnamese still regard cats and dogs as unclean and untamable, young, high-earning city dwellers in Ho Chi Minh City, Hanoi and Da Nang increasingly want live with furry companions - and enjoy bragging about them on social media. And Thai society is also developing, according to Euromonitor, "gradually a more relaxed attitude towards dogs in public spaces".

For the growing group of Thai animal lovers, state and privately organized pet fairs are increasingly being held across the country. And the industry is also turning out to be a relevant export factor: Thailand's strong food industry, which sends rice, seafood, fruit and ready meals all over the world, has become the fourth largest pet food exporter in the world after the USA, Europe and China. According to the Ministry of Commerce, exports rose to a value of 2019 billion euros in 1,4.

Premium instead of leftovers - only the best for pets

Feeding scraps of food to pets is still a common practice in many emerging markets today. “Just as it was common in Europe 30 years ago,” explains Heinz Schabreiter from C&D Foods Austria, “until the realization that animals need special nutrient compositions in order to stay healthy.” This awareness is now also developing getting stronger in Asia. Incidentally, this is anything but new territory for Schabreiter: He began supplying a Japanese company with dog and cat food 25 years ago. From Japan it gradually went to other countries in the region: first to richer markets such as South Korea, Singapore and Hong Kong, and later to Thailand, Malaysia and Indonesia.

The Styrian manufacturer's share of sales in Asia exports is still fluctuating between five and eight percent, but it is expected to double in the next three years - mainly due to the market entries planned for this year in China and Vietnam. “Austria enjoys a very good reputation in Asia as a quality leader in food. We are not in price competition here, but are well positioned in the growing segment of premium and organic products, ”says Schabreiter confidently - and is currently building more cold rooms, filling and packaging systems in order to expand capacities for ever larger order quantities.

"Austria enjoys a very good reputation in Asia as a quality leader in food. We are not in price competition here, but are well positioned in the growing segment of premium and organic products."

At the same time, the generosity extends far beyond the edge of the food bowl. Demand is also growing for animal cosmetics, clothing and photography, surveillance electronics, insurance and animal sitting - and providers are increasingly appearing digitally. Peto in Indonesia, for example, is a smartphone app that organizes professional pet care, delivers food and toys to your home and can even be used to arrange a rendezvous between playful dogs. The Malaysian app JomPaw also offers services such as walking the dog, last-minute animal sitting, training and taxi services for stressed or lonely animals in the greater Kuala Lumpur area - including turtles and rabbits.

The offer for generous animal lovers is growing especially in the boom country China: According to business data provider Tianyancha, almost 2020 animal-related companies were founded in the first half of 115.000. This dynamic can also be seen in the trade fair sector: the international Pet Fair Asia trade fair in 2020 - despite Corona - featured 17 exhibition halls in Shanghai with almost 1.700 exhibitors. The format is not only growing year after year, it is also presenting more and more self-confident Chinese providers. And some of them want to go out into the big wide world. Like the company XCHO from Shenzhen, which has been producing dog leashes for years on behalf of international branded goods and is now increasingly appearing on the world market itself. Petkit from Shanghai has already done this: Its smart drinking fountains, automatic feeders or transport backpacks for cats with built-in fans are also popular in the USA and Europe.

Schabreiter advises European suppliers of pet supplies who are striving for the Asian growth markets "to be as flexible as possible", because in competition with local companies "one cannot stubbornly rely on European products and rely on their good image". On the other hand, those who respond to the needs of the new pet owners, said Schabreiter, will "certainly benefit from the great dynamism in Asia."

At the hot spot