Start Magazine Global.business Together instead of alone 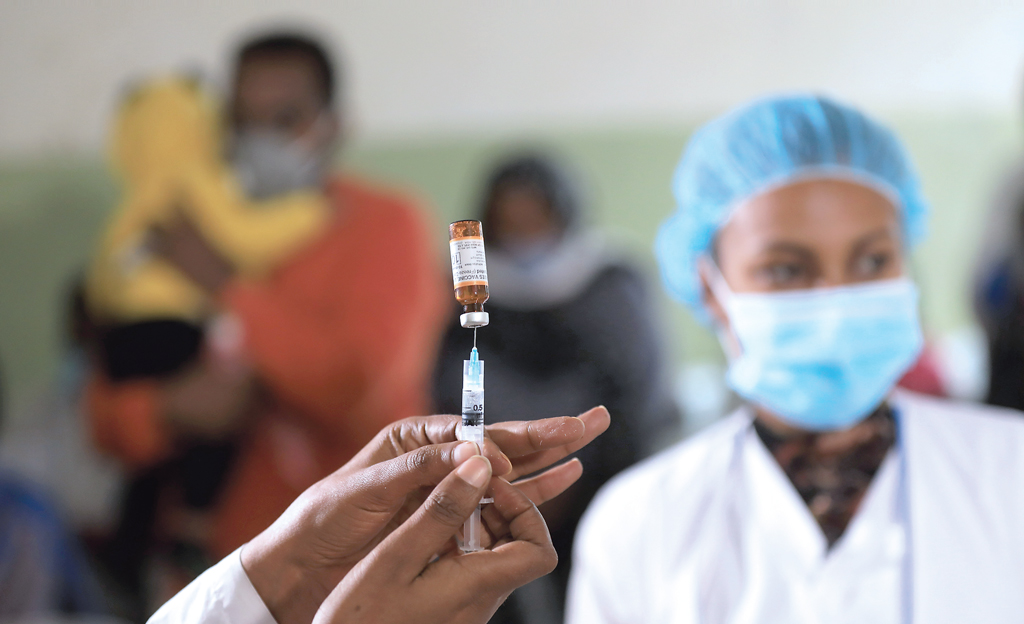 The corona pandemic triggered panic buying all over the world - and not just for toilet paper, pasta and soap in the supermarket. Masks, protective clothing and ventilators were also hotly contested. Governments sometimes waited weeks for supplies to keep their health systems running. And the next round of shopping is already underway: While researchers around the world are working under high pressure on an effective vaccine against the SARS-CoV-2 pathogen, we are experiencing a kind of arms race in individual countries for enough doses of a still unknown, promising vaccine candidate with little consideration for losses. Even when it comes to the flu vaccine, there is concern that it could become a scarce commodity in autumn, even if the Austrian federal government has significantly increased the procurement volume compared to previous years.

Who gets what vaccine and at what price, when? This question only comes to the fore when there is a (threatening) supply shortage. Global demand for vaccines totaled around 2018 billion doses in 3,5 and increased by more than 20 percent compared to the previous year - largely driven by large-scale vaccination campaigns in India and the generally growing demand in Southeast Asia and Africa.

If you take a closer look at the global market for vaccines, it quickly becomes clear: transparency looks different. On the one hand, there are a large number of industrialized countries which - usually subject to confidentiality - negotiate individual contracts and conditions with pharmaceutical companies. High-income countries are the main drivers of the global market for vaccines, which is estimated to be worth $ 26 billion: They usually pay the highest prices and also often choose more expensive vaccines that, for example, have fewer side effects or offer effective vaccination protection with fewer partial vaccinations. On the other hand, there are developing countries, whose negotiating position is usually significantly worse due to limited financial resources and market weight. New vaccines in particular are expensive to introduce. Besides some diseases occur predominantly in poorer countries, these therefore have a partly different vaccine requirement than industrialized countries. In addition, there are special requirements for the storability and form of administration of the vaccine, so that it can be brought to even the most remote regions.

Vaccination protection for everyone

The most common basic vaccinations around the world today include those against diphtheria, tetanus, whooping cough, hepatitis B and Haemophilus influenzae type B as well as vaccines against rotaviruses, pneumococci, polio, measles and rubella. "It is mostly the rich countries that drive innovations in this area and signal what they are willing to pay for it," says Kalipso Chalkidou from the US Think Tank Center for Global Development. For many corporations it is hardly possible to develop and offer vaccines exclusively for poorer countries - these are either provided at comparatively high prices or not even fully researched. To counteract this, manufacturers rely on so-called tiered pricing. Put simply, this means higher prices in developed countries, which also cover the research and development costs of a product, and lower prices in developing countries, which only cover the immediate production costs.

Affordable prices for the most common vaccines are in any case an important prerequisite for increasing the global vaccination coverage: This has stagnated at 85 percent for ten years and varies greatly, particularly in populous countries. In addition, the latest data shows that routine vaccination campaigns in around 70 countries have been interrupted due to Covid-19 and that around 80 million children under one year of age will not receive basic vaccinations this year.

3. September 2020
Global health expert Kalipso Chalkidou calls for more transparency and care in the current efforts to get a Covid-19 vaccine.

A key actor advocating the vaccine interests of developing countries is Gavi vaccination alliance, a global alliance of governments, public and private organizations (see box). Gavi provides financial support for vaccination campaigns and vaccine procurement to poorer countries. By bundling the demand of many developing countries and securing the necessary financing, the vaccine alliance reduces commercial risks for vaccine manufacturers and thus makes this market significantly more attractive. In addition, this way Gavi can negotiate better prices and thus continuously reduce the costs of vaccines. At the end of 2018, for example, the cost of basic immunization for a child was around 16 dollars, 21 percent less than in 2015. Gavi is currently promoting the use of 17 vaccines.

The special thing about it: All countries supported by Gavi have to share in the costs of the vaccines - with the long-term goal of maintaining a high vaccination rate and ensuring access to life-saving vaccines with increasing economic output, increasingly independent of international aid. 16 countries - including Angola, Bolivia, Georgia, Indonesia and Sri Lanka - have now achieved this “graduate status” and can finance their vaccination programs entirely themselves. But the big graduation ceremony is still pending. Many of the heaviest recipients of Gavi funds, such as India, Pakistan and Nigeria, are expected to be self-financing by 2030. The figures already show that Gavi was successful in her core concern: while the vaccination rate for diphtheria, tetanus and whooping cough (DTP3) in sub-Saharan Africa was 20 percent 51 years ago, it has risen to 2019 percent by 73.

However, the vaccine alliance is faced with a challenge that the number of supported countries is shrinking - thanks to increasing prosperity, mind you. "The more countries that lose eligibility and leave the Gavi pool, the more difficult it becomes to maintain their unique market position," said Chalkidou. In addition, Gavi's loss of eligibility does not mean that immunization goals have been achieved. The vaccination coverage for diphtheria, tetanus and whooping cough in India in 2019 was a respectable 91 percent. Pakistan and Nigeria are well behind with 75 and 57 percent respectively. In order not to jeopardize continuous progress in immunization, countries will receive low prices for certain vaccines even after Gavi’s support has expired. A number of manufacturers have committed to a transition period to this end. In the long term, these countries will still pay higher prices for vaccines in any case (see graphic), whereby self-procurers are also confronted with very volatile pricing, which depends heavily on factors such as the number of manufacturers, the order volume and the duration of the contract.

The cost of vaccines varies widely between self-procurers and countries that purchase vaccines through procurement platforms. Gavi countries receive the lowest market price (in US dollars) per vaccination dose. 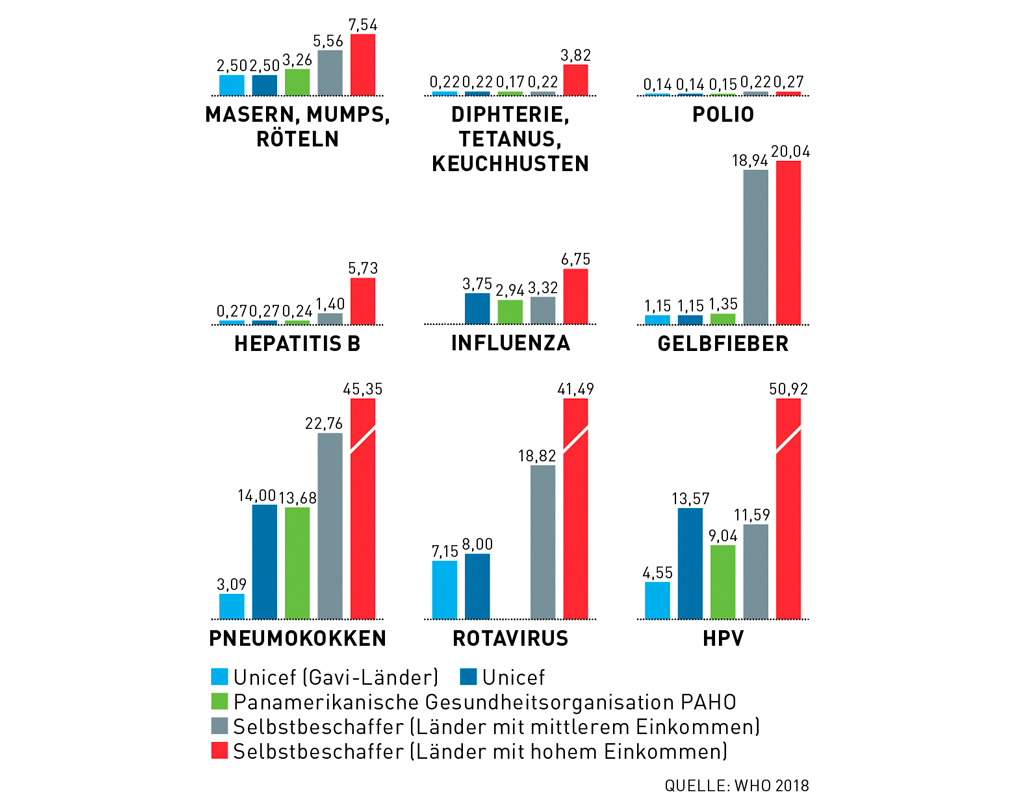 Most of the Gavi-sponsored countries obtain vaccines through the United Nations Children's Fund's Unicef ​​procurement system, which supplies a large number of emerging and developing countries with medical products and equipment and usually achieves the lowest market prices for many of these goods. In 2019, Unicef ​​procured 2,43 billion doses of vaccine for more than $ 1,6 billion on behalf of 99 countries. The Pan American health organization PAHO, the WHO regional office for all of America, also maintains a joint procurement system in which 41 countries in Latin America and the Caribbean are involved. At the EU level there have been similar efforts since 2014 for such a procurement mechanism for medical countermeasures, but it was only the corona crisis that really got things going: all EU and EEA countries as well as Great Britain, Albania, Montenegro, North Macedonia, Serbia, Bosnia and Herzegovina and Kosovo signed the agreement. Because even if states have a legitimate interest in primarily protecting their own population, the bundling of demand makes economic sense in any case.

Solidarity in the Crisis

In the current case of the Covid-19 vaccination, a global bidding race for vaccine candidates would not only drive up prices, but also create significant gaps in global immunity against the SARS-CoV-2 pathogen and thus encourage renewed outbreaks of disease international health experts agree. In the debate about the fair distribution of Covid-19 vaccines, Gavi CEO Seth Berkley tirelessly campaigns for a multilateral approach. To this end, Gavi, together with the World Health Organization WHO and the Coalition for Epidemic Preparedness Innovations CEPI, a global alliance for vaccine development, has initiated a market incentive program that is intended to ensure the supply of all participating, but especially poorer countries - the so-called Covax mechanism.

The model for this is the Pneumococcal Advance Market Commitment AMC, which pooled funds specifically for the development and manufacture of new pneumococcal vaccines in 2009 in order to offer manufacturers incentives through purchase guarantees to rapidly expand their production capacities and to share the risks of vaccine development. The AMC has enabled around 60 countries to introduce a pneumococcal vaccine in just nine years at a price of $ 2,90, less than five percent of the US list price. In addition to Pfizer and Glaxo-SmithKline, the Serum Institute of India has also been the first manufacturer from an emerging market to provide the vaccine as part of the AMC this year.

For such a model to work for a future Covid-19 vaccine, it needs as many supporters as possible - both on the part of governments and vaccine manufacturers. So far 173 countries have shown interest in the Covax mechanism. The advantage: Instead of just one vaccine, the Covax mechanism relies on a total of nine vaccine candidates, whose development and manufacturing process is supported and, in the end, at least one should go into mass production. Covax is expected to deliver two billion doses of a safe, effective vaccine by the end of 2021. And such a global problem can also be solved in a global way.

Gavi was founded in 2000 at the World Economic Forum in Davos to improve access to vaccinations in low-income countries. The public-private partnership supports countries with an average gross national income of less than $ 1.630 per capita - 58 countries are currently eligible. According to Gavi, 2018 million children worldwide had been vaccinated by the end of 760, saving 13 million lives in the long term. In the period 2016-2020 Gavi had a total budget of 7,5 billion dollars, and at the vaccination conference in June of this year, funding commitments of 8,8 billion dollars for 2021-2025 were made. The largest donors by far are Great Britain, the Bill & Melinda Gates Foundation and the USA - they contribute more than half of the total budget. Austria does not make any payments to the vaccination alliance.

Germany: Human rights due diligence by law from 2023