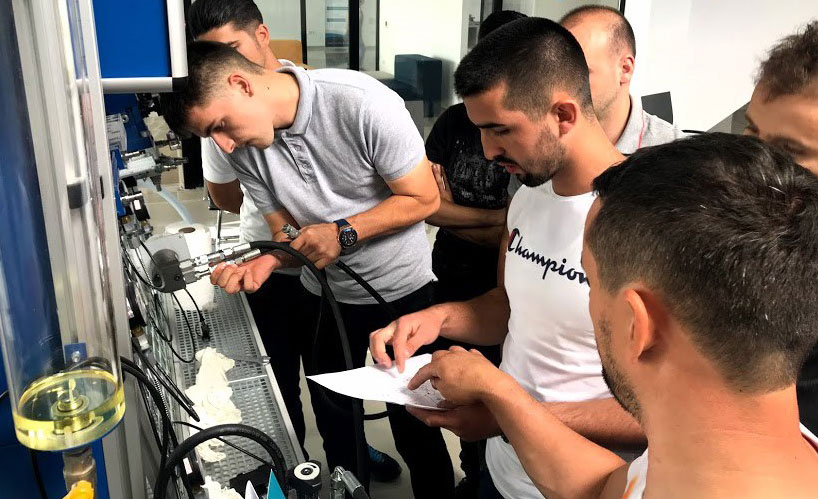 Dhe opening of the Meister Training Center on June 7, 2019 in Kosovo's capital Pristina took place in the presence of well-known representatives from business, education and politics. The presence of the Ministers for Education and Technology and Labor and Social Affairs highlighted the relevance of the new facility for the country. In addition, the ambassadors of Germany, Switzerland and Austria had come and addressed a few words to those present. Because the German Society for International Cooperation GIZ, Helvetas Swiss Intercooperation and EYE ("Enhancing Youth Employment") from Switzerland and the Austrian Development Agency ADA have contributed significantly to the realization of the vocational training center.

Host Hysni Ymeri welcomed the guests. The business economist and entrepreneur, who was trained in Greece, founded several elevator and escalator companies as well as a house installation company. For Kosovo and Albania, he is the exclusive cooperation partner of the Greek-German lift and elevator manufacturer Kleemann. Two years ago, Ymeri started a small training center for his employees in Pristina. He soon explored options for a larger litter, raised the funds, and set up the Meister Training Center, which is now open to all companies, in an easily accessible location on the periphery of the capital - the name is borrowed from the German title.

“One of the special features of training is that it combines it with employment. This fills a large gap that has arisen in Kosovo due to the trend towards academic education, ”explains Gunther Zimmer, head of the ADA office in Pristina. At the same time, it is not a classic apprenticeship: only young people with completed training or studies who want to gain practical experience through a nine-month or two-year additional training are accepted. Skill validation is also possible. Master does not compete with existing vocational training, as head Leunita Luzha emphasizes, but supplements it.

In terms of content, the focus is on mechatronics, electromechanics, electrical installation, water supply, heating and air conditioning installation - areas in which the manufacturing sector is desperately looking for specialists. "The Meister Training Center will play a key role in strengthening and maintaining the economy at national and regional levels," Luzha is convinced.

The project was coordinated by GIZ, Helvetas, EYE and ADA. The development agencies from Germany and Switzerland were particularly involved in the construction of the building, the machine equipment and the provision of training material. In addition, the delegation of German industry in North Macedonia took over the certification of trainers. It will also guarantee the quality of the exams - the certificate should also be recognized abroad.

Over a Economic partnership with the Austrian Development Agency Preparations were also supported on several levels, says Zimmer. For example, ADA promoted the legal safeguarding of the start-up, the creation of the specially designed curricula by experts from the BFI Burgenland vocational training institute and the capacity building in the ministries, which are ultimately responsible for the approval of the training.

In addition, the ADA enabled advertising campaigns and networking with the companies, which have to meet several requirements in the event of a cooperation. Among other things, they have to provide an internal trainer. “The contact with the companies was about making the Meister Training Center known, showing the advantages, but also overcoming reservations. These mainly concern the unusual fact that employees are not available during off-site training for around a week a month, ”explains Luzha.

For students who are recruited to schools and universities, the main objection is that they have to pay for the training - also differently than usual. Luzha argues that the courses are easily affordable using the income that participants earn on the farm.

On the day of the official opening, the first eight mechatronics graduates were able to receive their graduation certificate. Four electricians and three installers are currently attending training. “We don't want to rush anything,” says Leunita Luzha about the still sparsely attended courses, “things take time. And quality is more important to us than quantity. ”She is confident of getting the house full and then of being able to run the business economically.

"The plan is to train at least 250 young people between the ages of 18 and 35 over the next three years," said Zimmer. “Subsequently, the training should also be made available to other private and public providers so that the need for skilled workers can be covered throughout the country.” Ymeri himself is already working on transferring the model to Albania - in order to strengthen the labor market there too.

The Hymeri Group, which was built by the Kosovar entrepreneur Hysni Ymeri in 2007, now includes Hymeri Elevators Kosova, Hymeri Elevators Albania, Hymeri Kleemann Albania and, since 2015, the Hymeri elevators based in Berlin. In 2011, the group specializing in lifts and escalators was supplemented with a facility manager with Mjeshtri. The Master Training Center was founded in 2017 as a private training provider.