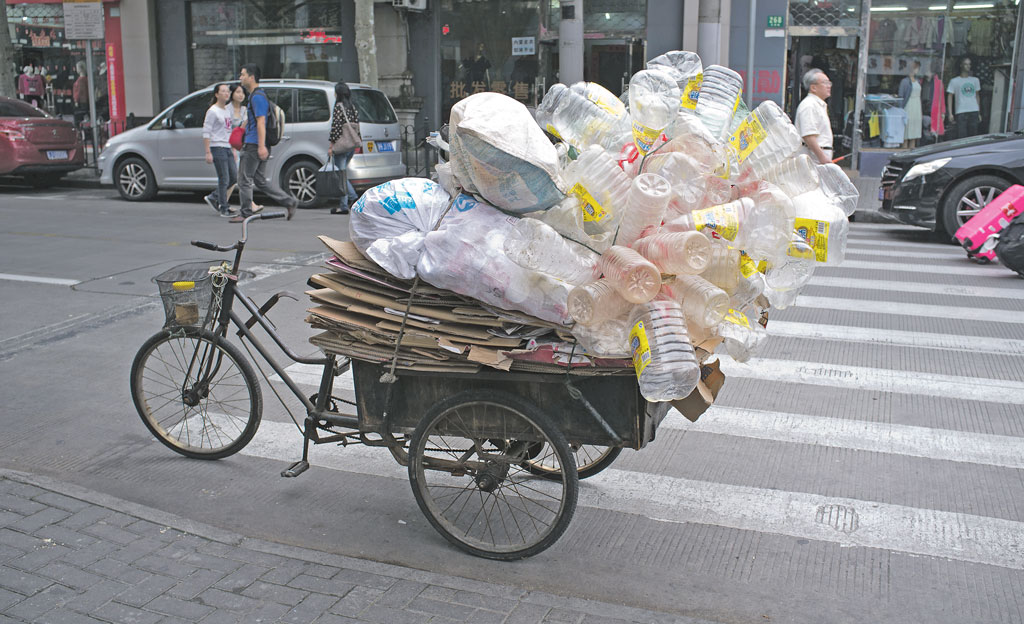 Drinking water and food are protected in Kenya from plastic packaging. But after use begins the misery. Because there are hardly any collection and recycling structures, so that the packaging land on wild dumps, in waters or ditches. But Kieran Smith has declared war on the plastic tide. Already 2010 he started his recycling start-up Mr. Green as a student in Zurich, since 2014 there is also a subsidiary in Kenya with Mr. Green Africa. More than 2.500 garbage collectors work for the company in Nairobi and collect old plastic, which Mr. Green Africa recycles and resells.

Since the quality of the recycled material initially left much to be desired, Smith sought advice in Upper Austria. The experts from the Institute of Polymer Science of Johannes Kepler University Linz advised him on technical issues. Soon, Mr. Green Africa will be able to produce from the recycled plastic recyclate produced on site a regranulate that is qualitatively the equivalent of raw material - thanks to a plant of the Upper Austrian company Erema, which will be put into operation in Nairobi at the end of the year. "The project shows how the informal waste sector can be integrated into a high-quality and economically successful plastic cycle economy," says Manfred Hackl, CEO of Erema (see interview on the right). Above all, he likes the initiative because "it's not just about waste disposal, recycling and recycling, but also fair conditions for the waste pickers who earn a living by collecting and reselling plastic waste."

Hackl is an entrepreneur, but also a tinkerer and circular economy pioneer. Together with his colleague Klaus Feichtinger, he was awarded the European Inventor Award for the counter-current technology for the recycling of plastic waste developed by them this year. This technology is also in the plant, which does its job in Nairobi.

Circular economy is currently on everyone's lips. Laws are passed, companies develop circulation strategies, and corporAID Multilogue, which took place in Vienna in cooperation with KPMG in September, the rush was correspondingly large. As an alternative to the dominant linear economy, the circular economy is designed so that products and their underlying resources continue to circulate after use. This significantly reduces the need for new raw materials. The circular economy is more than repair and recycling: the term stands for a new concept of business, the intelligent product design - products should already be designed so that their components can be reused as completely as possible later on - and includes the conversion of entire industrial or agricultural systems so that waste becomes the source material for something new.

According to the latest data from the Circularity Gap Report, which has been published since 2018, the global economy is nine percent circular. Conversely, this means that 91 percent of the resources used are thermally recovered after use, end up in landfills or in the sea, cannot be recycled at all like fossil fuels or simply not yet because, for example, many buildings and streets are still decades of use before the materials used are available for reuse.

Austria's circularity is slightly above the global average, according to a recent study commissioned by Altstoff Recycling Austria, the domestic economy is 9,7 percent circular. With 58 percent, the recycling rate of municipal waste in this country is high by international comparison, but the construction sector, mobility, a large share of imported consumer goods and fossil fuels are depressing the result. Potential is seen above all in a significantly increased use of renewable energy sources and less material wear in the construction sector.

31. October 2019
Manfred Hackl, Managing Director of the Upper Austrian plastics recycling company Erema, sees the recycling industry trend as an opportunity and an order for the plastics industry.

With a far-reaching conversion to circular economy, the manufacturing industry in the European Union alone could save up to $ 630 billion in material costs a year, according to a recent McKinsey study. And, according to Accenture, worldwide could generate 2030 billion dollars by the year 4.500, if companies pursued circular economy. Such statistics and reports are currently always formulated in the subjunctive. But many legislators are already trying to stimulate the process and make circular economy an indicative, perhaps even an imperative.

Countries such as Sweden, the Netherlands or Slovenia have developed ambitious circulation strategies. The European Union's Circular Economy Package, launched by the European Commission and approved last year by 2015, sets binding waste recycling targets across Europe. Until 2030 70 percent of packaging waste and 60 percent of municipal waste are to be recycled, as of 2035 the member states may only deposit a maximum of ten percent of their waste. This should both reduce waste volumes and boost sustainable economic growth - and could affect the trading partners of European companies in other parts of the world. However, these are not waiting for the circulation impulses from Europe or North America anyway: The current five-year plan of the Chinese government states, among other things, that three quarters of the Chinese industrial parks have to implement closed loop management procedures.

For companies, all this involves high demands and challenges. At the same time, new business opportunities emerge, which more and more companies - from multinationals to start-ups - recognize. "It benefits companies to feel pressure to work towards the circular economy. The legislation provides new dynamics and consistency, "says Manfred Tacker, Head of Packaging and Resource Management at FH Campus Wien.

That the circular economy has been understood as a "rich-countries issue", criticizes the renowned British think tank Chatham House. After all, many developing countries are already prepared for a circular economy, in contrast to industrialized countries: in poorer countries, millions of people in the informal sector live off the sorting and reuse of waste - such as electronic waste. The question is whether and how to turn it into formal employment and development opportunities. In any case, even without a commitment to systemic deficiencies such as a lack of waste management, even technologically sophisticated recycling machines will not be able to make a significant difference and plastic bottles will remain in the trenches instead of landing on the shop shelf again.

Chatham House says that momentum must now be used to address trade partnerships, regional centers and circular economy pilot projects in developing countries. The first steps have already been taken in some regions, such as Africa: Rwanda, Nigeria and South Africa launched the “African Alliance on Circular Economy” two years ago. However, especially in Asia, the need for a circular economy is enormous, considering, for example, that more than 80 percent of the plastic in the world's oceans comes from Asia.

The circulation markets of the future there are also attracting more and more Austrian companies. For example, Constantia Flexibles, packaging specialist for medicine, yoghurt or chocolate, will open the world's first plant in Ahmedabad, India, in November, which manufactures exclusively fully recyclable flexible packaging. And the Upper Austrian fiber manufacturer Lenzing has recently decided to build the world's largest lyocell fiber plant in Prachinburi, Thailand, about 150 kilometers east of the capital Bangkok, and aims to improve the environmental footprint of the whole industry in Asia in the future. However, there is still a long way to go from real circular economy, says Angelika Guldt, sustainability officer at Lenzing: "Ultimately, we need harmonized standards with Asia."

With all enthusiasm, the circular economy is neither a panacea nor an ecological one. Thus, circular approaches are not only often more expensive than the alternatives, they are sometimes also more energy-intensive or even environmentally incompatible. The circular economy aspect of waste incineration plants, for example, depends heavily on the materials available, the impact on emissions and the opportunities offered by alternative incineration. And while the recycling economy is highly meaningful for materials such as aluminum, whose recycling is significantly more energy efficient than primary production and is widely used, the repair of a vehicle or refrigerator must be weighed against increasing efficiency by purchasing a new one.

Thanks to technological change, the transition to circular business practices is much more efficient than before. New tracking technologies can significantly improve when products should be repaired, upgraded or recycled. Blockchain creates the necessary security in the supply chain. And the use of digital platforms leads to an increased exchange of products among consumers.

To speak of a change of paradigm, despite all the praises and possibilities is still premature. Nevertheless, it can be said that interest in the circular economy is increasing significantly. In the industrialized countries, it is both a question of the zeitgeist and economic opportunities. In emerging and developing countries, recycling could even skip certain resource-intensive development stages.

Cycle expert Manfred Tacker emphasizes that it ultimately depends on a much closer cooperation and linking of companies that rely on circular economy. The bigger the network, the more effective the circuit.