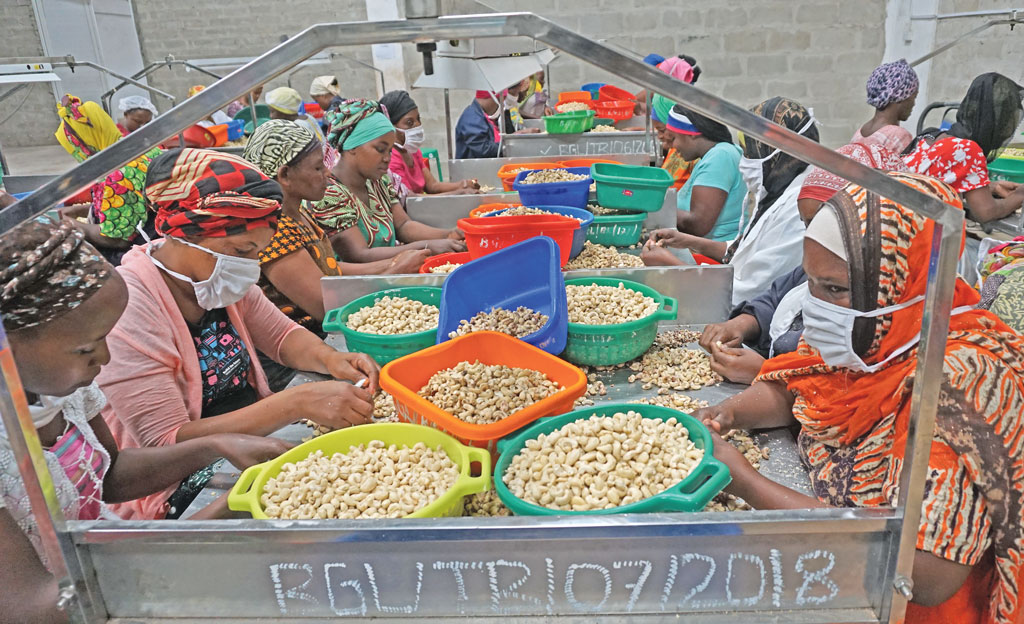 It's turbulent again in Tanzania right now, ”says Paul Schreilechner about the latest political events in the country where he has lived and worked for two years. And explains: “Tanzania is known as a politically stable and peaceful country, and it is. But that does not mean that everything is going smoothly for business people. As an entrepreneur, you always have to reckon with new, challenging situations. These can also call the project into question from one day to the next. ”By the project, Schreilechner means the company Biotan, which he opened in 2017 in Dar es Salaam, the economic capital and port of Tanzania. Your name alludes to organic products and Tanzania, specifically Biotan processes organically certified cashews for the European market.

With heart and brain

Schreilechner founded and managed two consulting firms in the environmental sector. Influenced by his family background, the trained botanist from Salzburg always cherished the dream of working in an agricultural environment. The wish took shape when, starting in 2012, he flew very frequently to the East African country because of a consulting assignment and met many people there, including a resident Austrian. The entrepreneur discovered the task of helping Tanzania, the eighth largest cashew producer in the world with 300.000 tons, by processing the kernels in the country to create higher added value. So far, 90 percent of the harvest has been sold to Asia and processed there for consumption.

Through visits to processors Schreilechner gained insight into the extremely complex process of Cashewkerngewinnung (more about cashews in the article "Snack on Travel"). On simple equipment, he himself produced his first product samples and sent them to several raw food traders in Austria. Immediately, all contacted companies reported interest. "Tanzanian cashews are particularly delicious," confirms the entrepreneur, adding with a wink: "However, I was never able to produce such good cores as I did later."

After the positive echo Schreilechner returned with business partner Johannes Siller to Tanzania. They probed the terrain and led one of the Austrian Development Agency ADA funded feasibility study for the establishment of a processing plant for organic cashews in Tanzania. As a test, they even exported a container with a few tons of purchased cashews. "The market for cashews in Tanzania is massively regulated," says Schreilechner, "you have to expect complications." The shipment was, however, without hesitation out of the country.

Entry into the tropics

Mitte 2017 told the ADA a two-year Economic Partnerships to. This enabled the partners to take the definitive step and make an investment that reached around one million dollars in the first phase. They rented a hall on the southern city limits of Dar es Salaam and installed cashew processing machines here, which they had acquired from a top producer in Vietnam after a personal inspection. Biotan's processing capacity was around 2.000 tons of raw cashews per year. They then subjected the operation to the required environmental and social certification and obtained permission from the cashew authority to buy raw cashews from farmers' cooperatives. “This makes us pioneers in the country,” says Schreilechner happily. Generally, the crops are to be delivered to state warehouses and auctioned.

With the support of ADA and in cooperation with external consultants, the partners were able to obtain official EU organic certification for around 300 farmers in the first year and hold training courses for their around 120 workers. "Today we have more than 900 organic farmers under contract and more than 200 employees in the factory," says Schreilechner, quantifying the ongoing expansion. Field officers are now stationed in the villages to support the farmers in questions about organic farming and higher productivity. Biotan has acquired ten hectares of land itself in order to set up a demonstration and trial farm.

Schreilechner is proud of his team, which is currently proving itself in coping with site-related challenges. The fact that the first cashew production was stolen overnight despite guards was a lesson here. It was a shock when President Magufuli decided last year that the government bought the entire cashew crop - Biotan was about to start production for the first time. After three months of efforts, the authorities managed to persuade Biotan to hand over the contracted cashews, if not yet sold. "The action was basically against the illegal activity of middlemen," explains Schreilechner.

Overall, the public administration is a separate chapter. In order to conclude a contract, case-by-case negotiations are required with the assembled community as well as with county, regional and federal authorities. "It goes from bottom to top and from top to bottom, often several times", describes the Austrian the customs. "Without support from locals you can only fail."

But Biotan is far from that. The plant will reach its full capacity this season - the goods are expected in Austria, Sweden, Denmark and the Netherlands. "We have already rented a second hall," says Schreilechner, "and want to set up their own factory premises in two years' time." So it works.

The Biotan Group Limited in Daressalaam processes certified organic cashews and exports them to Europe. Biotan became 2017 daughter of two Austrian SMEs - the BGIS GmbH, a provider of geographic information systems and environmental advice, and the MapCon Consulting GmbH, a business angel and investor - founded.

Two Tanzanians are involved at five percent each. His operational functions in the Austrian companies BGIS and EoVision have been decommissioned by Chief Manager Paul Schreilechner.