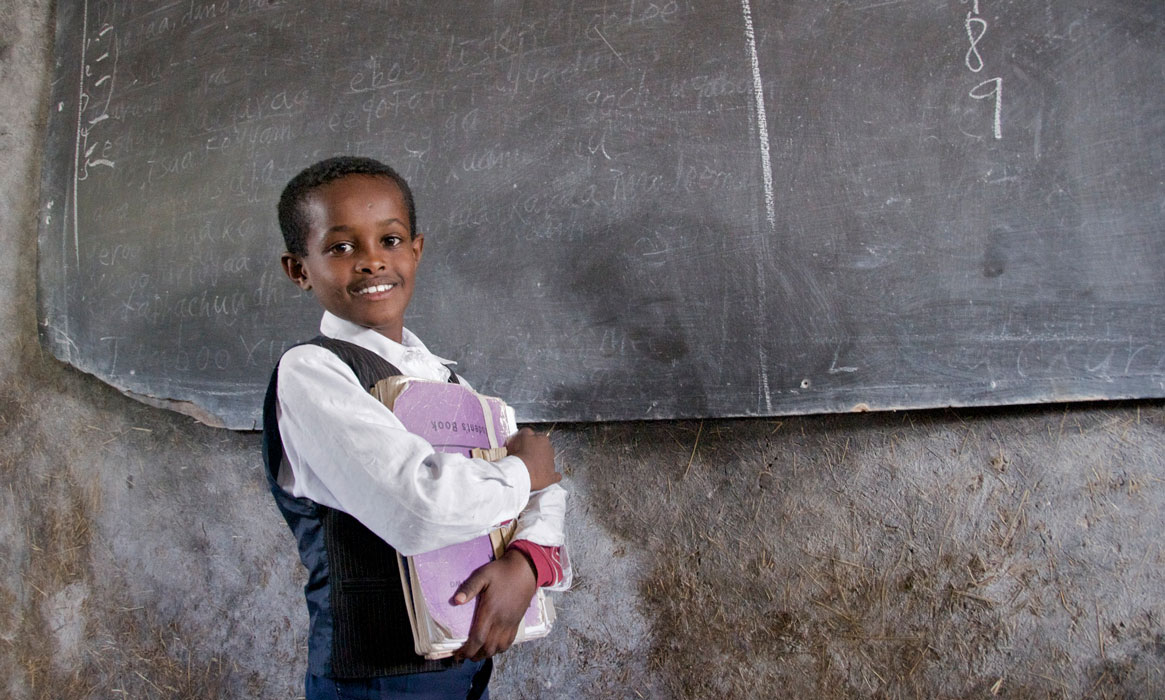 Can blockchain technology sustainably improve people's lives in Ethiopia? If it was up to Charles Hoskinson, the founder of the Cardano Foundation this question can be answered with a clear “yes”. Next year, five million high school students and all students in the country will receive a Cardano blockchain-based digital ID under which their grades and academic progress will be recorded and documented in a decentralized manner. In Addis Ababa, partnerships have been entered into with universities and students have been trained in cryptography and blockchain development. According to the Ethiopian education minister Getahun Mekuria, Ethiopia is to become the “largest blockchain user in the education sector” and a “player in the fourth industrial revolution”. He is convinced that the quality of education will improve as a result.

For five years now, the Cardano Foundation has been preparing for this world's largest use case of blockchain technology. The project is also the first in which a government agency is officially cooperating with a crypto company - according to Hoskinson, it is "an incredibly exciting partnership". And that should only be the beginning - the technology offers the possibility of solving various problems in developing countries.

Blockchain technology, which has so far caused a sensation with cryptocurrencies in particular, has been around for more than ten years. In a nutshell, a blockchain is a decentralized database that is operated, controlled and further developed by its users. Entries and transactions can be viewed by all users and can no longer be changed afterwards. Transfers take place in direct contact.

For the computing power that users provide for the operation of the decentralized network and the validation of transactions, they are paid for with so-called tokens. There are around 11.000 of these, but only 16 have a market capitalization of more than $ 873,5 billion. At $ 81,3 billion, the oldest cryptocurrency, Bitcoin, is clearly at the top, while Cardano is currently number three with a market capitalization of $ XNUMX billion (see graphic). The tokens are traded on digital exchanges such as Coinbase or the Vienna-based company Bitpanda.

The top 5 cryptocurrencies feature together over more than $ 1.000 billion Market capitalization. 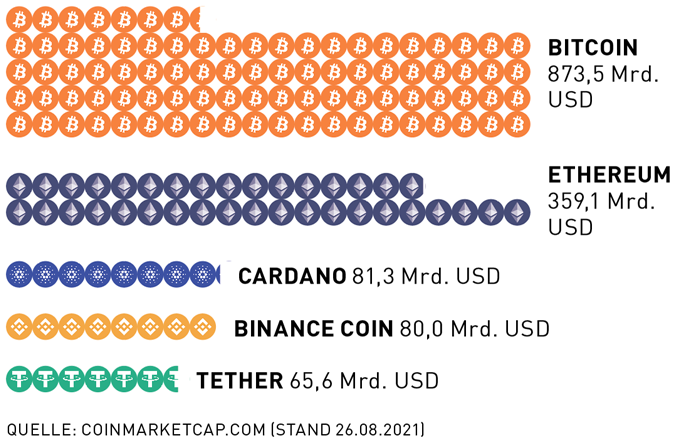 El Salvador is leading the way

Interest in the new technology is limited in countries where elections are largely normal, financial systems are in place, and legal titles are recognized. The media are more likely to report here on the price volatility of bitcoin, the high energy consumption of blockchains or the use of crypto currencies as ransom after data hacking. Emerging and developing countries are more willing to experiment. The technology is seen there as a beacon of hope on many levels.

El Salvador recently took on a pioneering role. In June 2021, the country's government introduced Bitcoin as the second official means of payment alongside the US dollar. The motives are clear: To this day, the majority of Salvadorans do not have a bank account, which ultimately makes tax payments more difficult. Since it is sufficient for payments with Bitcoin to have a digital wallet that can be used from any smartphone, this problem should be solved. Another motive is that El Salvador receives a good fifth of its gross domestic product from remittances from 2,5 million Salvadorans in the diaspora. The recipients have so far missed three to ten percent of the amounts due to fees charged by payment service providers such as Western Union or Moneygram for money transfers. These discounts will no longer apply, as Bitcoin payments are made without intermediaries.

In order to make the population, who are mainly used to cash payments in dollars, receptive to Bitcoin, every citizen will receive a digital starting credit worth 30 dollars. Overall, the government wants to invest more in digitization and hopes for a boost in innovation through the settlement of international start-ups.

While El Salvador for this advance on the part of the World Bank and the International Monetary Fund Received criticism, other emerging and developing countries showed great interest. You will closely observe the outcome of the experiment and especially the use of Bitcoin in everyday life.

The influx of cryptocurrencies in Nigeria, Argentina, Venezuela or Zimbabwe can be explained for other reasons, namely as a form of protection against rampant inflation and as an alternative to limited cash currencies. Bitcoins are exchanged for so-called stable coins such as tether or USD-Coin, which are tied to the dollar and thus protected against volatility and high inflation.

Resistance to abuse of blockchain technology

The reservations of states towards crypto currencies are mainly based on the fear that this will circumvent their own foreign exchange control. For example, Turkey banned payments in cryptocurrencies in May 2021. The background to this is the concern that the Turkish lira will continue to come under pressure from cyber currencies. It has lost a lot of its value in recent years, and inflation is high in the country.

Meanwhile, in the most populous state in Africa, Nigeria, with an estimated 15 million emigrants, Bitcoin and Co are eagerly transferred, traded and lent despite the ban. According to Statista, 42 percent of Nigerians say they use cryptocurrencies. So the country is the number one in this area. In Europe, Switzerland is the leader with a 13 percent user quota of blockchain products.

In addition, cryptocurrencies are under regulatory pressure worldwide with regard to money laundering, terrorist financing or investor fraud. Just recently there was a spectacular case on the popular South African crypto exchange Africrypt. The two Afri-crypt founders were able to lure customers with promises of ten percent daily returns - and then went underground with 69.000 Bitcoins worth billions of dollars. In the absence of regulations on cryptocurrencies in South Africa, the financial supervisory authority could only regretfully note the fraud.

The greatest potential for disruption of blockchain technology, however, does not lie in its use for cryptocurrencies, but in the ability to store identity and personal rights, title or training certificates decentrally and in a tamper-proof manner for the broad mass of the population. This is exactly what Charles Hoskinson wants to prove with his Cardano blockchain in Ethiopia.

The pilot project in the education sector with five million participants is just the beginning (see interview). By 2023, a further 20 million Ethiopian citizens are to receive a digital identity, to which, in addition to training certificates, land and property titles as well as the right to vote are to be linked. The digital key and thus the power of disposal over this personal information lies exclusively with the users. The data is stored decentrally on numerous servers and is secure, even in the event of war, displacement or natural disasters, as well as globally accessible to the respective owner.

2. September 2021
For John O'Connor, Africa boss of IOHK, the company behind the Cardano Foundation, the pilot project in Ethiopia shows how transparency can be created and fraud prevented with the help of blockchain.

The blockchain could offer solutions to real problems in emerging and developing countries, while in industrialized countries the problem to be solved has yet to be found, as critics of Bitcoin and Co like to emphasize: In sub-Saharan Africa, where there are hardly any established financial systems and legal titles, Blockchain technology is probably the most useful.

It is possible that the order has just changed compared to the previous one. Because while technical innovations in the past first addressed problems in industrialized countries, the conditions for success today seem particularly favorable in emerging and developing countries. Mainly because developers - whether from the USA, Argentina or Ethiopia - can participate equally in the further development of blockchain projects based on open source technologies in a digital and networked world. And once these work and convince there, they could also be used and scaled in our latitudes. Blockchain technology is thus a game changer, also in terms of the order of the beneficiaries.